REVIEW: NO ONE BUT YOU by BRENDA NOVAK 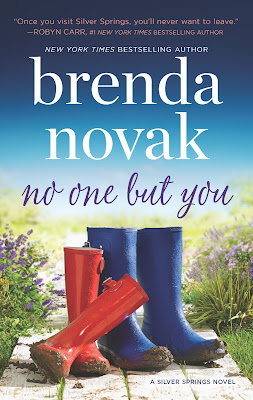 No One But You
Silver Springs #2
By: Brenda Novak
Releasing May 30th, 2017
Harlequin MIRA
+ Add to Goodreads

In No One But You (Silver Springs #2) by Brenda Novak, Sadie Harris is determined to move on with her life and make her soon-to-be ex, Sly, realize once and for all that she'll never go back to him. Except to do that, she needs a job and so she accepts the one offered to her by Dawson Reed; a man that's only just been acquitted for the murder of his adoptive parents. Will she be safer with Dawson on her side, or will his presence in her life get him hurt?

What a wonderful and gripping tale Ms. Novak has penned in this second story of her Silver Springs series, which grabbed my attention from the very beginning and didn't let go until I was at the end quicker than I expected. The way this story started had me concerned for the heroine, because she could have been putting her life at risk by meeting Dawson. Since everyone in their small town believed he was guilty of the crime he'd been charged with and no one seems to think any different, even though he was acquitted of the crime. Will Sadie be able to help him prove everyone wrong? Will the person that committed the heinous crime be brought to justice?

As for the dialogue, it was compelling due to the main characters back stories and together with the challenges these two face made this story a real page turner. Sadie's soon-to-be ex-husband is causing trouble for her and doesn't know when to give up. Will she ever finally be free of him? Certainly, Sadie gives him enough reason to finally give up on her by the way she stands up to him and begins to fight back with her words. I found her strength and courage admirable, because no woman should be afraid of the man they once loved. I also liked the heroine's determination to stand up for Dawson, because he was a good man that didn't deserve to have everyone against him when it was palpable how much he loved his adoptive family, which is proven by all he's doing to get his sister back.

While Dawson, he's been through so much and I could understand why he feels the way he does about law enforcement. No way could he trust any police after what they did to him. Also, I liked that he was willing to let Sadie and her son into his life, and how protective he was of them. Her soon-to-be ex-husband was a real piece of work, and I was glad that he didn't allow the man to intimidate him. That he was willing to help Sadie fight back and stuck by her through thick and thin, no matter how dangerous things became for him.

Overall, this was a really good read that kept me entertained from start to finish with its dialogue and wonderful array of characters, except the majority of the police force because it's palpable the boys in blue stick together. Why couldn't they realize how much of a danger Sadie's soon-to-be ex posed to her life after every wrong move he made towards her? The way this story ended had me concerned for the main characters. How far was Sly willing to go to make sure the main characters paid because of all he believes they've done to him? However, it was the epilogue that wrapped this story up perfectly, because of what the townspeople did for Dawson. Certainly, he deserves the acceptance of the townspeople after what they learn about the person responsible for committing the crime he was acquitted for. I would recommend No One But You by Brenda Novak, if you enjoy the second chance romance trope, the sexy protector trope or books by authors Lori Wilde, Bella Andre or Marie Force.

BLURB
New York Times bestselling author Brenda Novak welcomes you to Silver Springs, a picturesque small town in Southern California where even the hardest hearts can learn to love again

Struggling to make ends meet after a messy divorce, Sadie Harris is at the end of her tether. Her waitressing gig isn't enough to pay the bills let alone secure primary custody of her son, Jayden, a battle she refuses to lose. Desperate, she accepts a position assisting Dawson Reed the same Dawson Reed who recently stood trial for the murder of his adoptive parents. Joining him at his isolated farm seems risky, but Sadie is out of options.

Dawson has given small town Silver Springs plenty of reasons to be wary, but he's innocent of the charges against him. He wants to leave his painful past behind and fix up the family farm so he can finally bring his dependent sister home where she belongs.

As Sadie and Dawson's professional relationship grows into something undeniably personal, Sadie realizes there's more to Dawson than the bad boy everyone else see she has a good heart, one that might even be worth fighting for.
BUY LINK:  Amazon