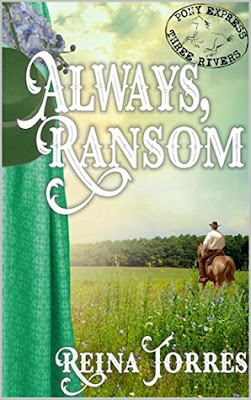 In Always, Ransom (Three Rivers Express #1) by Reina Torres, Ransom McCain is a man determined to see that the Three Rivers station thrives when it comes to The Express, but there are those in the community willing to do whatever it takes to make certain The Express doesn't succeed. Doing his duty makes it hard to find love, but somehow Delia Burroughs worms her way into his heart, burrowing deep enough until there's no way he'll possibly be able to let her go. However, someone is determined to have Delia running scared and keep Ransom distracted because of the arising problems along the trail. Will The Express be disbanded before it even gets up and running enough to be a success, or will Ransom find a way to keep Delia safe and find the person responsible for causing the trouble along the trail?

I am not a big reader of Historical Romance, but Ms. Torres always pens a wonderful read in whatever she writes, so there was no way I was passing up the opportunity to read this story, and I've got to say that this book is quite captivating. As it gives readers a superlative introduction into what The Express is all about if they don't have the slightest idea what it entailed; reveals the troubles men may have faced because others were threatened by how good The Express would be if those that made it happen did succeed; and the oaths the men had to take to be a part of something so grand, so they stayed focused on what they had to do. However, it also gives a reader the hope that love can blossom when a couple least expect it.

Both the main characters have interesting back stories, and I loved every moment they conversed, as there is so much chemistry between them from the moment they meet. It's magnetic and charming, even though neither are certain a relationship is a good idea when there's a lot going on in their lives. Delia is doing her best to take care of her father and help him get his life back on track, which isn't easy with the man determined to drown his sorrows away. Yet, it seems the more time she spends with Ransom, the more the hero begins to help her dad too, especially once they face the hurdle of Ransom wanting to be the man that wins Delia's heart. Will Ransom get his chance at pursuing Delia with her father's blessing?

As for the heroine, Delia is strong and brave with everything she goes through and I liked that she didn't give up on her father, even though his treatment of her at times wasn't what you'd expect of a father towards his daughter. He could be a tad rude and take her for granted, and I wouldn't have blamed her if she'd decided to give up on the man. Although there was no way she would, since she was so loyal and kind; the sort of person determined to help anyone that needed it, which is proven for what she does for a young boy that seems to be acting out against his parents and showing them disrespect.

While Ransom, his life hasn't been easy, but he's turned out to be a really good man. He's loyal, kind, caring, determined to be good as his job and I liked that when he finally decided he wanted a shot at a future with Delia that he went for it. But what I liked most about the two of them as a couple, is that it seemed the heroine was willing to go against her father, if he didn't give Ransom his blessing to pursue Delia. Because what is a life without love; the kind of love that lasts forever and that is definitely something both the hero and heroine deserve. Does her father make the right choice?


Overall, this book was a sweet and gratifying start to what is sure to have readers wanting to come back to read more of this series, as the secondary characters in the other heroes that ride for The Express are just as entertaining and interesting as Ransom. The way this story ended had me concerned for the heroine, because of what she discovers. Will Ransom be able to keep her safe? What will happen to the person causing trouble so The Express would hopefully fail? However, it was how things ended up between Ransom and Delia that had me smiling. They are so meant for each other. Moreover, I liked the words Ransom penned to someone that was very important in his life, as it shows he's finally happy again. I would recommend Always, Ransom by Reina Torres, if you're looking for a sweet, historical romance or if you enjoy books by authors Nan O'Berry, Debra Holland or Cynthia Woolf.
OVERALL RATING

BLURB
The Express took men and rode them hard across the West. That adventuring spirit belonged to men full of life, ready for whatever met them on the trail, everything, except for love.

Ransom McCain was the last man hired to ride for the Three Rivers station, but he was chosen to take the first ride west because he could think on his feet. Tensions are high because there are people determined to make the express fail, and little does Ransom know that he would fall for a woman caught in the crossfire.

Delia Burroughs is a young woman with plenty of heart and the strength of spirit to help her family survive in the West. But one by one they’ve left until it’s just Delia and her father. His grief and struggles may make it impossible for her to leave and make a family of her own. When she met Ransom, she knew she’d found a man she could love, but forces are determined to take her new home from her and perhaps her chance at real love.

Ransom and Delia will have to decide if what’s happening between them is something they want to fight for, or will they let themselves be pulled apart by the danger they’re both facing.

Starting with the Spring of 1860 when the Pony Express began their service of mail delivery between St. Joseph, Missouri and Sacramento, California, each of the Three Rivers Express books will take on a new season and a different rider.
BUY LINK:  Amazon