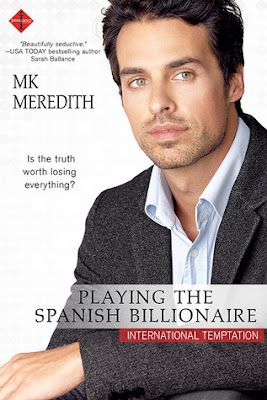 In Playing the Spanish Billionaire (International Temptation #2) by MK Meredith, London Montgomery is a woman that needs some downtime from the stresses in her life. Her constant worry for her mother and their financial situation has weighed heavily on her for a while, but unfortunately there's nothing more she can do than what she's been doing by working her butt off. Yet, she needs a break and she's determined to mark off the items on her list while she's on her dream vacation. First on her list is to Kiss a Spaniard, and Mateu Espasa seems like the perfect man to kiss. Except London can only carry on so long before she confesses why she's with Mateu. Will he be able to forgive her, or will the past keep them from achieving their happy ever after?

What a wonderfully written, fast-paced, captivating read Ms. Meredith has penned in this story, encompassing a heroine in desperate need of taking her dream vacation; a hero determined to find a way to be there for his family, even if it means using the heroine; and a couple with so much chemistry that I was surprised by how long it took for them to take their relationship from platonic to physical. The way this story started had me liking both the hero and heroine immediately, and I loved how they came face-to-face for the first time. Did Mateu set London up, or was she just one of the unlucky ones?

The dialogue was well-written and had me hooked due to the main characters back stories and their growing relationship. London needs the time away because she's under a lot of pressure trying to make ends meet and look after her mother. All she wants to do is have the chance to have a little fun, cross off a few of the items she's listed, but it's hard to let go of the worry she feels for her mother. What if something happens to her mother when London is on a different continent? Moreover, London has a few decisions to make that aren't easy. Should she give Mateu a chance, even knowing his motive for getting close with her? Should she admit the truth of why she's spending time with him after learning what she does about his ex?

While the hero, he's confident, works too much,  loyal and I liked how determined he was to show London a good time, which is proven by all the things he does for her and the places he takes her. I could understand why he reacts the way he does when London admits why she's been spending time with him, allowing him to show her the best of Barcelona. Yet, at the same time, I found he was being a tad unfair, considering he was using her just as much. But what I liked most of all about the hero is his love for his family and that he would do anything for them. Really, he's lucky to have such a wonderful mom who isn't afraid to knock some sense into him -- so to speak -- when it comes to London. Advice about how he shouldn't let the heroine go when it's palpable she's special to him.

Overall, Ms. Meredith has penned a fantastic read in this second book of her International Temptation series where the fast-paced plot together with the main characters dialogue, chemistry and back stories entertained me from start to finish. The way this story ended had me smiling, because Mateu certainly delivers in making things right with the heroine the way he helps her cross off another item on her list and gives her the best surprise ever. I would recommend Playing the Spanish Billionaire by MK Meredith, if you enjoy the opposites attract trope or books by authors Victoria Davies, Stephanie London, Naima Simone or Sarah Balance.

BLURB:
Mateu Espasa, CEO of Barcelona’s most luxurious hotel, knows how to deliver a five-star experience. When he learns the identity of hotel reviewer, London Montgomery, it seems harmless to play as her local tour guide to make sure she enjoys her stay and places his hotel back in the running for the Elites Travel and Life Magazine's hotel of fame. But every moment with London makes Mateu want her just as much as he needs that review.
Constantly working to cover her mother’s medical bills, London needs to have a little fun on this vacation. First on her list: Kiss a hot Spaniard, and her knight-in-shining-Armani at the train station seems to fit that bill—he’s local and definitely hot! But when she discovers the man charming her is really CEO of the hotel she’s reviewing—supposedly secretly—she decides to see how far he’ll go to make her dream vacation a once in a lifetime experience.
Mateu shows her the romance of his city and his soul, but when the truth comes out, the fun is over, and it turns out nobody wins in a game of hearts.
BUY LINK:  Amazon
at 00:08