REVIEW: CONFESSIONS OF A FORMER PUCK BUNNY by CINDI MADSEN 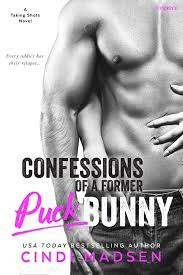 In Confessions of a Former Puck Bunny (Taking Shots #4) by Cindi Madsen, Lindsay Rivera has decided she'll never fall for another hockey player again, but there's something about Ryder 'Ox' Maddox that dares her to take a chance. Especially since he doesn't give up on pursuing her easily when she's told him repeatedly he'll never stand a chance of winning her over. However, when Lindsay realizes she needs help to pass her math class otherwise she won't be able to graduate, it seems the only person available to tutor her is Ryder. Will she give him a chance or is allowing him to tutor her as far as things will go?

Ms. Madsen's books are fantastic, and this series I've loved from the very first book. It's a series about hockey players falling in love and overcoming tough obstacles to win their heroine's hearts, and certainly, Ryder faces a tough challenge with Lindsay. Since the last relationship she was in with a hockey player didn't work out, and she has a lot of dislike for guys that play the sport because of it. Can Ryder overcome her hang-ups to prove to Lindsay that he's different than the last guy she was with?

As for the dialogue, it was intense due to the main characters back stories, and the obstacles these two face on their journey to happy ever after. Clearly, Ryder's parents have a huge problem with Lindsay, which had me reading quickly wanting to know what their quandary was with her? What is their deal that they're willing to have their son mad at them for interfering in his love life? However, the dialogue wasn't all intense. There were some really good light-hearted moments such as Lindsay's confessions and the teasing dialogue between Ryder and Lindsay. The hero is determined to win the heroine over and isn't afraid to get sneaky about his intentions by involving the secondary characters.

The way this story started had me laughing at Lindsay's antics. Did she really think she could avoid Ryder so easily? Then again, I could understand why she acts the way she does, because she has serious trust issues. Issues that not only stem from her last relationship, but because her mom never set a good example. Sure she did all she could to provide for Lindsay, but she did it by seducing men and that's not the way the heroine wants to live her life. Instead, she wants to be more independent than she already is and focus all her attention on her future career. Those traits made me admire the heroine, because her mom is a real piece of work that thinks what she does to men is acceptable behavior.

While Ryder, his parents aren't the nicest of people with his dad never declaring how proud he is of his son, even though Ryder's following in the man's footsteps and tries his hardest to prove his worth. Will he ever do something that will make his dad happy? Then there's his mother; a woman who thinks appearances are important and I could understand why Ryder tries his best to get along with her, because she's a good ally to have whenever he locks horns -- so to speak -- with his father. Yet, what I liked most of all about Ryder is how smart he is, his willingness to help Lindsay with passing math, and how determined he was to win Lindsay's heart, even though at times -- it seems -- there may be no hope of winning her over. Will his charm eventually work on Lindsay?

Overall, Ms. Madsen has penned a wonderful read in this book where the strong chemistry between these two definitely makes things interesting, as Lindsay is torn between what happened in the past and worried that it might happen again if she's not careful. The way this story ended left me completely satisfied, as Ryder knows just the way to get Lindsay to talk to him. Will his sneaky ways work? However, it was the epilogue that made this story worthwhile, because of the surprise Lindsay has for Ryder. He made her life better by not giving up on pursuing her and she's willing to do the same for him. I would recommend Confessions of a Former Puck Bunny by Cindi Madsen, if you enjoy New Adult Romance, the friends to lovers trope or books by authors Lisa B. Kamps, Lili Valente or Jillian Quinn.

BLURB
Confession #1: I used to be a puck bunny, but after a hockey player broke my heart, I gave up all things hockey. Now I'm just focused on finding a way to pass my math class so I can graduate college.

Confession #2: Ryder "Ox" Maddox's deep, sexy voice sends fuzzy tingles through my entire body, and I'm powerless to stop it. Which is a big problem since the hot, surprisingly funny hockey player is my new math tutor.

Confession #3: I can't stop thinking about how ripped Ryder is from all his hockey training, and how fun it'd be to cross lines with him.

Confession #4: I kissed a hockey player and I liked it.

Confession #5: If I'm not careful, I might relapse and fall for Ryder, and then I'll be totally pucked.
BUY LINK:  Amazon