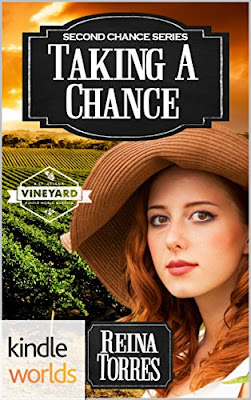 In Taking a Chance (Second Chances #4) by Reina Torres, author Vance Donovan needs somewhere he can unwind and be able to finish writing his next release. Staying with Jordan Schultz in St. Helena seems perfect, except she's an even bigger distraction than he thought. Can the strong attraction they've had from the moment they met turn into more, or will the fact that they live on opposite sides of the country make them see that a relationship between them would never work?
This is the second book I've read by Ms. Torres, and again she left me wanting to read more of her work. Right from the beginning, this story was very engaging, fast-paced and had me immediately engrossed in its storyline, because of the tight friendship Jordan has with Frankie DeLuca. It seems they can whatever they like to each other and get away with it, although it seems Frankie is feeling a little insecure due to her condition. Can Jordan convince Frankie that she has nothing to worry about? Can Frankie convince Jordan to take a chance on getting up close and very personal with Vance?

Both the main characters entertained me from start to finish with their back stories and their growing relationship, but it was Ava, Jordan's daughter, that I really enjoyed in this story. She's a total firecracker the way she stands up for her mom, because she doesn't want to see her get hurt again. Since Ava's dad doesn't know the meaning of the words 'good dad', and only seems to be concerned about his daughter when he needs something from her. But what I liked most about Ava was her growing friendship with Vance. There was a special bond between them, even though it seems the hero can't win sometimes when he does something Ava doesn't agree with.

As for Jordan, she's strong, brave, hard-working and has done really well for herself, considering her jerk of an ex-husband. She's managed to raise an independent and wonderful daughter in Ava, and it's about time she finally steps back into the dating world or at least have a little fun with a man. Also, I liked how protective the DeLucas are of Jordan, which is proven by what Gabe does towards the end. While Vance, he needs the time away to get his manuscript finished. Yet, he also needs the time he spends with Jordan to make him realize that it isn't always easy to find someone you have such a strong connection with. That if he doesn't take a chance than he'll be missing out on something special. Since it's palpable that Jordan is Vance's Ms. Right and that he shouldn't let anything stand in the way of being with her.

Overall, Ms. Torres delivered a wonderful read in this book where the secondary characters had me smiling throughout with their advice and their protectiveness of Jordan. The way this story ended had me wondering how Vance was going to make things right with Jordan. Certainly, she deserved to be groveled to. Still, the words Vance says to Jordan are pretty perfect, especially with the decision he made. However, it was the epilogue that wrapped things up nicely, because Vance made a lot of decisions; decisions which were right for him and have done wonders for his career as an author and have made his life so much better. I would recommend Taking a Chance by Reina Torres, if you're looking for a quick read or enjoy the friends to lovers trope or have had the pleasure of reading Marina Adair's St Helena Vineyard series and want more of it.

BLURB:
She’s thrown herself into her work for years – He’s buried himself in his – What happens when they both decide to take a big breath of life?

Jordan Schultz has managed everything for years. She’s managed her boss, his heavy work schedule as the head of the DeLuca family wineries. In her private life, she’s raised her daughter alone after her husband left her for a newer model, making sure that Ava had every advantage possible even when she was driving her daughter crazy. Putting everyone else in front of her own needs, Jordan forgot how to breathe. Now Ava’s in college, her boss is settled and a happy family man, all she has to do is live… her own life. She’s just not sure how to do that.

When Vance Donovan’s friend convinced him to send his book to an agent, he had no idea it would sell. Meeting Gabe years later at a book signing, his old friend introduces Vance to his assistant Jordan. That meeting led to hundreds of hours of phone calls and video chats, giving Vance a glimpse of something outside of his isolated life in New York. When he needed a change of pace to finish his latest book, what better place was there than the small-town heart of St. Helena, CA, Jordan’s home town? If he thought the chemistry between them on the phone was incredible, having her close enough to touch made him feel more alive than he’d been in years and it showed in his work.

When it’s time for him to go back to New York and leave Jordan behind, will he be able to walk away and go back to his single, isolated lifestyle? Or will they both decide that what they feel for each other is worth taking another chance.

Jordan appeared in Kissing Under the Mistletoe and again in Autumn in the Vineyard as Gabriel’s assistant and a board member of Ryo Wines. This is her second chance at love even if she’s not sure she’s ready.

Taking a Chance continues to explore the sun dappled vineyards and groves of St. Helena after the conclusion of Marina Adair’s amazing romance series. You’ll find new friends along the way and visit with old friends at every turn.