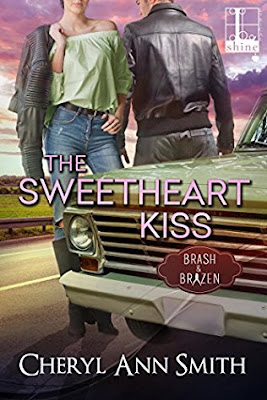 In The Sweetheart Kiss (Brash & Brazen #3) by Cheryl Ann Smith, Jess Lucas is one very determined private investigator, especially after she manages to escape an attempt on her life. Luckily, the attempt disrupts her frenemy's wedding, allowing Jess to escape the horrible farce. However, this time instead of investigating alone, Jess finds herself teaming with Detective Sam Wheeler. Can they solve the crime without too much trouble while finding their happy ever after?

I have loved this series from the very beginning with the three women -- Jess, Taryn and Summer -- going from cheerleaders to private investigators and having to overcome the challenges they face along with the men they fall in love with. Challenges such as a difficult ex-boss that was out to hurt one of the women to solving an attempted murder case to finding who wants to hurt their boss. Each story delivers some really good twists and turns that kept me as a reader on the edge-of-the-seat, but this story had me totally ensnared with its action and suspense. So much so that I couldn't wait to see how Jess would manage to tick Sam off each time she did, so that he'd live up to the nickname she gives him.

As for the dialogue, it was intense and riveting due to the main characters back stories and the investigation into why someone would want to target Jess. Is it to do with a case she worked, or something else? However, the dialogue wasn't all intense. The teasing banter between the main characters throughout had me laughing several times. Certainly, Jess provides quite a challenge for Sam, which in turn has him fighting between wanting to arrest her, protect her or fight the urge to have her in his bed. Which option will he choose?

Both the main characters had me hooked by their back stories, especially the hero. Why did he quit playing baseball when he was so good? Is there a reason for him becoming a cop instead? Moreover, the hero is hard-working, loyal, and I loved how protective he was of Jess, because she had a habit of acting first and worrying about the consequences later. Instead of making sure she stayed safe while chasing down every lead and following police procedure. While Jess, she was such a delightful heroine. She's strong and brave having been through so much with the scare she had, which makes her want to start living her life to the fullest and hopefully finding love and happiness like her best friends have. She's also a pit-bull when it comes to the investigation, especially once things become more dangerous. Who is the real target? Is it Jess or someone else? Will they find the person responsible for the crimes being committed? Certainly, it was interesting to  learn what the criminal's end game was and why they were committing the crimes.

Overall, Ms. Smith has delivered an exhilarating read in this book, which had me hooked from start to finish with its fast-paced plot, the support the secondary characters offer, and the strong chemistry between the hero and heroine. The way this story ended had me cheering for this couple's happy ever after, because of the news the heroine has for the hero, which could either make him want to keep Jess close forever or could scare him away, especially after what happened with his last serious girlfriend. I would recommend The Sweetheart Kiss by Cheryl Ann Smith, if you enjoy romantic suspense, the sexy protector trope or books by authors Alexandra Ivy or Anne Calhoun. I would also recommend reading all three books of this series, and then wait for the next one to be released.

BLURB
Jess Lucas works hard at the all-female PI firm Brash & Brazen, and after a brush with death, she’s determined to play hard too—preferably with a certain detective on the Ann Arbor police force . . .

Jess was stuck at a frenemy’s wedding, playing bridesmaid in a mustard-yellow monstrosity, when chaos erupted. First the bride’s ex tried to stop the wedding. Then someone really put a damper on the big day by sending a bullet through a stained glass window and into one of the groomsmen. At least her ugly dress came in handy to stop the bleeding . . .

While the poor guy is rushed to the ER, Jess gets grilled by a gorgeous cop who’s not thrilled to learn she’s part PI and part pit bull. But he has to admit she’s highly observant . . . and he observes that she’s pretty hot, too.

The thing is, Jess was walking up the same aisle as the victim, and Sam suspects she was the real target. It’s more than professional duty that makes him want to protect her—if he doesn’t arrest her first for interfering in his investigation . . .
BUY LINK:  Amazon