REVIEW: UNTIL TOMORROW by NANCY NAIGLE 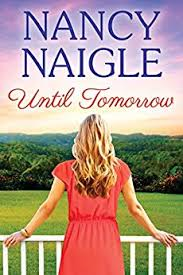 In Until Tomorrow (Boot Creek #3) by Nancy Naigle, after another one of her relationships ends with heartbreak, Flynn Crane decides to give up on dating and focus her attention on keeping her grandparent's bed-and-breakfast from going belly-up. However, she never expected Ford Morton to come for a visit at Boot Creek and have her question her decision on relationships. Will she give love another chance, or will the thought of leaving Boot Creek keep her from achieving happy ever after?

Having loved the first book of this series, and not finishing the second book, I had to discover whether Ms. Naigle could capture the magic she did for me when I read Life After Perfect, and I've got to admit this is -- I believe -- the best book of the series so far. However, in saying that, I did find this book a tad slow to start with due to the heroine's whining about her latest break-up and the fact that it takes a few chapters for the hero and heroine to come face-to-face, but when they did I was totally excited. Because they had a connection when they met at the wedding of their mutual friends, and I couldn't wait to discover which direction their relationship would take, as Flynn has decided to give up on relationships. Will Ford be able to change her mind? Can he show her that not all men will let her down?

Both the main characters entertained me from start to finish with their growing relationship, their back stories and I especially liked learning all about Ford's work as a glassblower. It was very interesting, and has me wanting to give it a try. Moreover, Ford has come a long way in his life with going from a lawyer living in Tennessee to being a glassblower in Alaska, and I could sympathize with him when it came to making such a drastic change in his life. Because there was no way a sweet, kind and caring man like Ford would ever be able to hack the kind of work his father lived for and be able to live with himself. However, what I liked most about Ford was all that he did for Flynn and how determined he was to win her over. He showed her she was special and deserved love in her life. Besides, he's definitely the right man for her.

While Flynn, I thought she was a bit of a whiner and a tad weak in the beginning because of her recent break-up and the fact that she might give in to talking to her ex, but I liked that she proved me wrong and realized in the end that her relationships never worked out because none of the men she was ever with were her Mr. Right. Furthermore, the heroine is also loyal and has so much love for her grandparents that she would be there for them in an instant. Yet, what I liked most of all about the heroine was the choices she had to make and that I believed she mostly made the right ones when it comes to pursuing a relationship with Ford; the choice she has to make between family and Ford; and the temptation she was presented with her old job. Would she go back to her old job? Would she continue to run the B&B when she's falling in love with Ford and he lives in Alaska?

Overall, Ms. Naigle has delivered a wonderful read in this book where the romance took a while to go from platonic to physical, but was worth the wait because of the chemistry between Ford and Flynn, which increases with every moment they interact with playful banter. The way this story ended was completely satisfying, as both the hero and heroine were willing to do whatever it takes to be together. In other words, sacrifices had to be made because nothing is more important than to be with the one they love. I would recommend Until Tomorrow by Nancy Naigle, if you enjoy the friends to lovers trope, the matchmaking trope, or books by authors Terri Osburn, Carolyn Brown or Jamie Beck.

BLURB
After yet another heartbreak, Flynn Crane is pretty much done with dating. She’s not even sure she can keep her grandparents’ struggling bed-and-breakfast afloat. But just as she’s about to give up on both her business and her dream of settling down in Boot Creek, Ford Morton walks back into her life.
Even from thousands of miles away, Ford never forgot the spark that ignited when he first met Flynn. Now a monthlong artists’ residency near Boot Creek gives him the perfect opportunity to find out just how intense the fire between them can get.
Neither of them expected just how that little spark would turn into heated passion. With Ford’s return to Alaska looming near, Flynn is torn between her life in Boot Creek and a chance to move to the wilderness for love. Can Ford and Flynn find a way to share tomorrow together—before they both lose their hearts in Boot Creek?
BUY LINK:  Amazon