REVIEW & GIVEAWAY: CRAZY FOR YOU by RACHEL LACEY 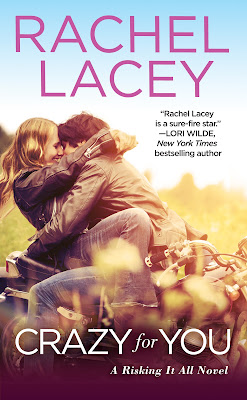 Crazy for You
Risking It All #2
By: Rachel Lacey
Releasing: March 28, 2017
Forever
+ Add to Goodreads

In Crazy for You (Risking it All #2) by Rachel Lacey, Emma Rush is determined to try new things, instead of being classed a "good girl" all the time. There's no one better to take a walk on the wild side with than her brother's best friend, Ryan Blake; a gorgeous man that used to be the ultimate bad boy. However, the more time she spends around him, the harder he is to resist. There's just one problem. Ryan made a promise to her brother he's determined to keep. Can she find a way to get him to change his mind, so they can have a chance at forever love?

What an engrossing and fast-paced read Ms. Lacey has penned in this book, which hooked me from the very beginning with the dare Emma's friends challenge her to follow through on. Will Ryan respond to her attempts at flirting? Will she be able to convince the hero into doing what she needs to do for the dare? However, I loved the moment the hero and heroine came face-to-face for the first time, as neither are expecting to see each other in that moment. Yet, it's palpable both are happy to see each other.

Both the main characters were entertaining due to their past history, as Emma was the annoying little sister type growing up and now she's not; their growing relationship, which is filled with plenty of heat; their back stories, which were emotional because they've lost so much and need each other to remind them that they still have someone they consider family; and the fact that this story encompasses the brother's best friend trope and Ryan does his best to honor the promise he made to his friend. Will Ryan be able to keep his promise?

Emma is strong, brave, and has done well for herself after everything she's been through in having lost her mom and brother at a young age. She's also hard-working, and I liked her plans for her future. She has so many decisions to make when it comes to her career, and I liked the ones she did make. As it meant she could still have the dream for her career she always wanted, stay where she's always felt she belonged and hopefully have the happy ever after she desperately deserves after suffering so much loss in her life. Moreover, I like how enthusiastic she is about her career and how she makes everyone in her small town proud of her by what she does with honoring those that never came home from fighting for their country.

While Ryan, he was a fantastic hero that I could not get enough of. He does his best to resist Emma, but there's no use. Not when she's so determined to annoy him with the way she teases him with talk about other guys and her plans to be a little bad. They have plenty of fun, which had me smiling throughout this book, and definitely get a little wild in and out of the bedroom. The hero's past wasn't an easy one either, because he was a bit of a troublemaker, but he's lucky to have found such great friends in the male secondary characters, as he, Ethan and Mark have managed to make a success of themselves with their business.

Overall, Ms. Lacey has penned a really good read in this book, which made me smile plenty of times because of the teasing dialogue between Ryan and Emma as well as between the main and secondary characters. Yet, it also made me want to cry at times due to the main characters back stories, especially with Ryan torn between honoring his promise to Emma's brother and wanting to be with Emma. Can he find a way to do both? The way this story ended was delightful, as Ryan had to find a way to make things right with the heroine after what he did to make her mad at him. However, it was the epilogue that wrapped this story up perfectly, because of Emma's surprise. I would recommend Crazy for You by Rachel Lacey, if you enjoy the brother's best friend trope or books by authors Lori Wilde, Jules Bennett, Jessica Lemmon or Shannon Stacey.


“Rachel Lacey is a sure-fire star." --- Lori Wilde, New York Times bestselling author
SHE'S TAKING A WALK ON HIS WILD SIDE
Emma Rush can't remember a time when she didn't have a thing for Ryan Blake. Haven's resident bad boy is just so freakin' hot-with tattoos, a motorcycle, and enough rough-around-the-edges sexiness to melt all her self-control. Now that Emma's over being a "good girl," she needs a little help being naughty . . . and she knows just where to start.
Before Emma's brother enlisted in the military, he made Ryan promise that he would protect her from everything--including himself. When her brother doesn't come home, Ryan needs to turn his screwed-up life around to honor his pledge. But he knows he's still not the right kind of guy for someone as sweet as Emma. Only he can't stop wanting to be with her. Wanting her. Falling in love with a good girl may be the craziest risk this bad boy can take . . .
Buy Links:      AMAZON | B & N | GOOGLE | ITUNES | KOBO

Rachel Lacey is a contemporary romance author and semi-reformed travel junkie. She's been climbed by a monkey on a mountain in Japan, gone scuba diving on the Great Barrier Reef, and camped out overnight in New York City for a chance to be an extra in a movie. These days, the majority of her adventures take place on the pages of the books she writes. She lives in warm and sunny North Carolina with her husband, son, and a variety of rescue pets.

What did you enjoy most about writing this book?
I loved writing all the fun, adventurous things Ryan and Emma did together in CRAZY FOR YOU – rock climbing, cliff jumping, motorcycle rides, etc. They were so much fun to write, and it was the perfect balance to some of the heavier themes in the book. These two characters really bring out the best in each other, constantly pushing each other out of their comfort zones.
If you had a theme song, what would it be?
Dream On by Aerosmith – “Dream until your dreams come true!”
Name one thing you won’t leave home without.
Chapstick! I have a weird obsession with it.
A la Twitter style, please describe your book in 140 characters or less.
Contemporary Romance Author. Wife. Mother. Animal Lover & Rescue Advocate. Hufflepuff. Powered by wine, chocolate, and books!
If you could have dinner with any three authors (alive or dead), who would you choose and why?
First, JK Rowling because she is a literary genius and a fierce feminist, and I’d love to chat with her about anything and everything. Next, Mary Higgins Clark because she was my very first “favorite author,” and I’d love to thank her for that. And of course Nora Roberts because she is my hero and gives great advice. All three of these ladies have inspired me so much, and I would love to just soak up all the knowledge they could impart.
What are your favorite types of stories to read?
My favorite books make me laugh *and* cry. I want ALL THE FEELS while I’m reading!