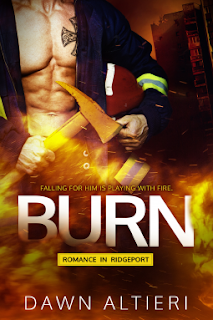 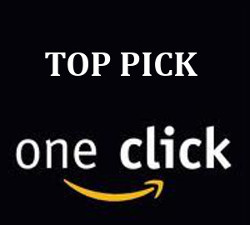 In Burn (Romance in Ridgeport #1) by Dawn Altieri, Chloe Addison works hard to show she has what it takes to be a big deal in real estate development. However, when an explosion rips through the building she was looking to turn into luxury condominiums and ends up destroying her first major project, Chloe finds herself in trouble both professionally and personally when the explosion is ruled as arson. Will she be able to clear her name before anything more dangerous happens?

Ryan Monroe's dream is to be someone that investigates the aftermath of suspicious fires, instead of continuing to fight blazes as a firefighter. So, when the perfect opportunity presents itself to solve his first investigation, Ryan decides to get close to the witness or suspect depending on various people's opinions. But when he realizes Chloe could be in danger, Ryan is determined to protect her. Can he keep her safe, or will the arsonist win?

I love a good firefighter story, but I believe Ms. Altieri has penned more than just a good one in this first book of her Romance in Ridgeport series. Indeed, this story was an astounding and thrilling read from start to finish and deliciously hot in more ways than one in the scorching sex scenes, the delectable hero, and the raging fires that pose a danger to Chloe. The way this story started had me on the edge-of-my-seat with worry for Chloe. Will she be held accountable for the fire? Will her boss expose her past, especially when it could make her more of a suspect than a witness in the investigator's eyes?

Both the main characters were compelling due to their back stories, especially since both have suffered tragedies in the past, which causes Chloe to wonder who she can trust and makes Ryan protective as they discover bits and pieces about each other's pasts. Will Chloe realize that Ryan is nothing like her ex before it's too late? Will the heroine find a way to finally be free of her ex? Moreover, Chloe is strong and brave in everything she does, especially by standing up to her ex when it comes to his threats and intimidation. I also liked that she did her best to push Ryan out of her life, because she was worried about him. Yet, at the same time, I'm glad that the hero didn't give up on her, because she needed someone on her side the more dangerous things became for her. While Ryan, he was a wonderful hero and so were the men of the Fire Station he worked with. I could understand why they were giving him advice to be cautious about getting involved with Chloe, yet I liked that he went against the advice because he believed she was innocent. I also liked how protective the hero was of Chloe and how he was so adamant of her innocence, especially when it seemed everyone was believing she was guilty in causing the fires.

Overall, Ms. Altieri has penned a fantastic romantic suspense in this book where the amount of romance and suspense was the perfect combination and kept me entertained from start to finish along with the characters back stories and the obstacles these two face to achieve their happy ever after. The way this story ended had me concerned for one of the main characters. Would they escape the danger? However, I liked how everything worked out for Chloe and Ryan and the surprise the hero had for the heroine. Since they deserve all the happiness in the world after all that they've been through in the past. I would recommend Burn by Dawn Altieri, if you enjoy romantic suspense, the sexy protector trope or books by authors Avery Flynn, Cindy Skaggs or Tessa Bailey.

BLURB
Chloe Addison is on the verge of a promising career in real estate development until an explosion destroys her first major project and casts suspicion on her in an arson investigation. Her career is suddenly at risk—and possibly her life.

Firefighter Ryan Monroe wants a spot on the arson team, and getting close to Chloe might be the best way to solve his first investigation. Despite a painful past of his own, Ryan has dedicated himself to saving people, and when he realizes Chloe is in danger, she’s no exception. He just might be the perfect guy to rescue her, but their attraction could bring them both down in flames.
BUY LINK:  Amazon
at 21:49