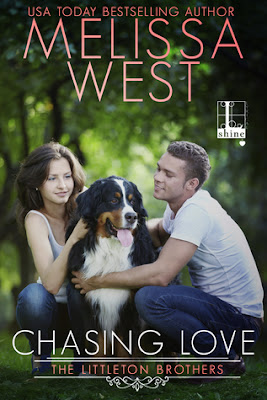 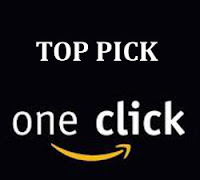 In Chasing Love (Littleton Brothers #2) by Melissa West, after a harrowing experience that has left her scared and feeling like she should always be looking over her shoulder for trouble, Lila Jacobs has returned home to Crestler's Key. Working for the local vet, she's working hard towards her career dream and nothing is going to stand in her way. However, seeing Charlie Littleton, her brother's best friend again sends her heart racing and has her remembering all about the crush she once had on him. Will Lila and Charlie finally get the happy ever after they want, or will Lila's brother who just happens to be Charlie's best friend keep them apart?
From the moment I read my first book by Ms. West, which was Racing Hearts, she became a must-buy author for me, and again with this book she's penned an addictive read that consumed me from the start and didn't let go until I was at the end. Everything about this story -- the fantastic characters, the fact that it encompasses -- I believe -- one of the best tropes in the brother's best friend trope, the fast-paced plot and the dialogue which was the perfect combination of playful, emotional and intense -- made this story a total page turner that I never wanted to end. Will Charlie and Lila get the happy ever after they both deserve after everything they've been through in the past.

As for the dialogue, it was well-written and had me hanging on every word, wanting to know more about the main characters and what happened in their pasts to make them so against relationships. Lila was caught up in a very harrowing situation and it's understandable why she is the way she is. Who wouldn't be a little jumpy and fearful of going out just for fun? Luckily, talking about what happened to her helps and those moments where she does prove how good Charlie is for her. Somehow, the things he says to her show Lila that she was down for a while, but she's strong and certainly not out. Not by a long shot. That what happened to her hasn't kept her from continuing on with her life, even if she did have to make a few changes to cope such as moving home. Moreover, I liked how Lila stood up for herself when it came to things worth fighting for. Such as her job and the difficulties she faces from the elderly man that owns the vet clinic as well as her relationship with Charlie when it comes to her brother.

While Charlie, he hasn't had the easiest of times with relationships either. His ex was a real piece of work with what she did to him by taking everything that mattered. However, he's done well for himself, which is proven by his impressive social media skills and the chance he may be looking to take business wise. He's also loyal, protective and I liked how determined he was to keep things platonic between him and Lila, because he didn't want to ruin his friendship with her brother and also didn't want to lose Lila in the process. However, with the strong chemistry between them that just kept getting more intense, it was palpable he would lose the battle. Really, I was shocked Charlie managed to hold out as long as he did.

Overall, Ms. West has penned an incredible read in this book, where the secondary characters entertained me almost as much as the main ones and which now has me looking forward to the next story for this series. Who will the final Littleton brother end up with? The way this story ended had me worried for the heroine, because of the touch of suspense this story had. However, I was so happy the way things worked out, especially with the surprise in the epilogue that had the brothers concerned about who would be their mother's favorite son. I would highly recommend Chasing Love by Melissa West, especially if you love the brother's best friend trope.

BLURB:
Farming family land on sunny Crestler’s Key, the sweet, sexy Littleton brothers are notorious bachelors. But all that will change when the right woman comes along . . .


There aren’t many things Charlie Littleton values more than his lifelong friendship with his buddy Lucas, currently home from a tour in Iraq. But when he discovers that Lucas’s younger sister, Lila, is back to assist the town’s overburdened veterinarian, Charlie is torn. She’s no longer the skinny, awkward kid he remembers, but a gorgeous woman—one Lucas would never approve of him dating. When Lucas asks him to watch out for Lila when he’s called to duty again, Charlie can’t say no—but he can’t pretend it’s easy to ignore his feelings either.

As a teen, Lila crushed on Charlie—hard—and the man he’s grown up to be is even more wonderful than she dreamed. Relationships are a tricky business, though, and too much history is at stake to risk one now. But every moment they’re together is heated by their simmering attraction—and one day an impulsive kiss leads to much more. What’s tangled in a matter of loyalty soon becomes a question of the kind of love worth chasing . . .
BUY LINK:  Amazon