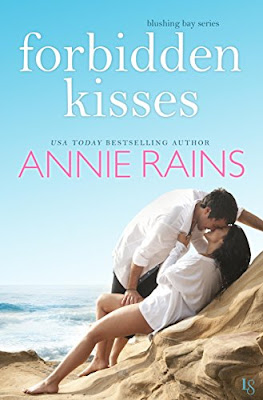 In Forbidden Kisses (Blushing Bay #1) by Annie Rains, Jack Sawyer and Grace Donner were once step-siblings, but when her mother wronged his father, both families went their separate ways and haven't spoken to each other since. Except now, Grace needs a job and the manager position Jack is looking to fill for his family's business would be perfect. Will they be able to work together, or will the past keep them from exploring the chemistry between them?

I have read every single one of Ms. Rains books, and there has not been a story yet of hers that hasn't hooked me from the very beginning, and this one was no different. From start to finish, this enemy to lovers-forbidden relationship trope encompassing book was riveting, fast-paced and drew me in because of what the heroine is going through. She needs a job, and needs one desperately. Will she be hired before it's too late? Will she and Jack be able to work together without too much difficulty?

The dialogue was well-written and entertaining due to the history their two families have, the obstacles these two face on their journey to happy ever after and what happens to one of the main characters at the end. Can they finally reconcile or was too much damage done by Grace's mother for their families to ever be on friendly terms? Will their families ever approve of a relationship between them? Furthermore, the heroine is strong, brave, loyal and I liked how determined she was to help her mother. Because the woman wants to make amends for all that she did, knowing what she did was very wrong and something her mother regrets so much.

While Jack, I could empathize with him because of what happened to his best friend. What is he supposed to do now when they were going to go into business together? Will he make their dream come true? Also, I liked the challenges the hero faces such as his family's reaction to his and Grace's relationship when the truth finally comes out; whether he can return to doing what he was doing when he lost his best friend; can he find it in his heart to forgive Grace's mother for all the hurt she caused; and whether he can find a way to convince Grace that they shouldn't let anything stop them from achieving their happy ever after.

Overall, Ms. Rains has penned a delightful read in this book, which encompassed a red hot romance; wonderful secondary characters that I can't wait to read more of; and an ending that had me cheering for this couple's happy ever after, as Jack found the perfect way to win Grace back. Although, I was concerned for one of the main characters with what happens to them. Will they be all right? I would recommend Forbidden Kisses by Annie Rains, if you enjoy the enemy to lovers trope, the forbidden relationship trope or books by authors Rachel Lacey, Melanie Shawn or Maisey Yates.

BLURB
For years, Jack Sawyer’s family has been running their upscale seafood business like a finely tuned machine. But every machine breaks down eventually, and suddenly Jack needs a new office manager, a new kayak launch, and a new lease on life. Then Grace Donner shows up again. She’s smart, motivated, and perfect for the manager position, but if she’s anything like her mom, she can’t be trusted. And Jack has never been able to trust himself around Grace.

Grace hasn’t seen her former stepbrothers since their parents’ messy divorce, but she never forgot them—especially Jack. She misses being part of the big rambunctious Sawyer clan, and if there’s an opportunity to set things right, she means to do it. But she can’t ignore Jack’s irresistibly kissable lips, or the searing way he looks at her when he thinks she’s not looking. Their chemistry is more explosive than ever. And if the Sawyers can forgive and forget, anything is possible.
Buy Links:      AMAZON | B & N | GOOGLE | ITUNES | KOBO 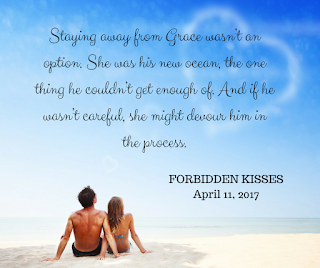 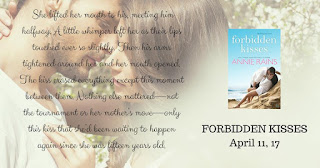 Jack reached for a folded blanket beside the cooler and laid it down on the open floor of the boat. “I know it’s not the most comfortable surface for lying back, but I thought we could look at the stars. It’s a favorite pastime of fishermen, you know.”
“Oh yeah?”
He reached for her hand to help her lower to the floor. She held on to his tightly, surprised at how off balanced she felt. Then they lay back together, close enough that they touched. The soft hair on Jack’s arm resting against hers aroused her senses.
Were they really just going to look at the stars?
Yes, it was all very romantic, but so was doing other things under the stars. Things she’d been thinking about since stepping aboard.
Jack pointed up at the sky and started to speak. Grace was tired of talking, though. Tired of resisting what she wanted, and right now all she wanted was Jack.
Unable to help herself, uninhibited by the wine and the romantic environment, she rolled on top of him and crushed her mouth over his.
Judging by the stiff protrusion that met her inner thigh, he wanted her just as much.
“Well, hello there,” he said, smiling against her mouth.
“I’m sorry,” she said, even though she didn’t mean it.
His hand slid down her back and settled on her bottom, pulling her snug against him. “I’m not. I’d decided tonight was for romance only, but I can’t think of anything more romantic than making love to you on this boat.”
White-hot heat tore through her. She was so hot that maybe it was time to start stripping.
As if reading her mind, Jack tugged the hem of her shirt up on her back and then over her head. The rest of her clothes fell away in the wake of his needy hands until she was tipsy and naked on the floor of his pontoon boat—on a boat ride to nowhere in particular, except his body was promising to shoot her to the low-hanging full moon. 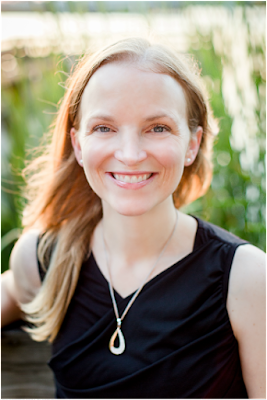 Annie Rains is a USA Today bestselling author who writes small-town love stories set in fictional towns on the coast of North Carolina. Raised in one of America’s largest military communities, Annie often features heroes who fight for their countries, while also fighting for a place to call home and a good woman to love. When Annie isn’t writing, she’s spending time with her husband and three children, or reading a book by one of her favorite authors.
Author Links:   WEBSITE | FACEBOOK | TWITTER | GOODREADS