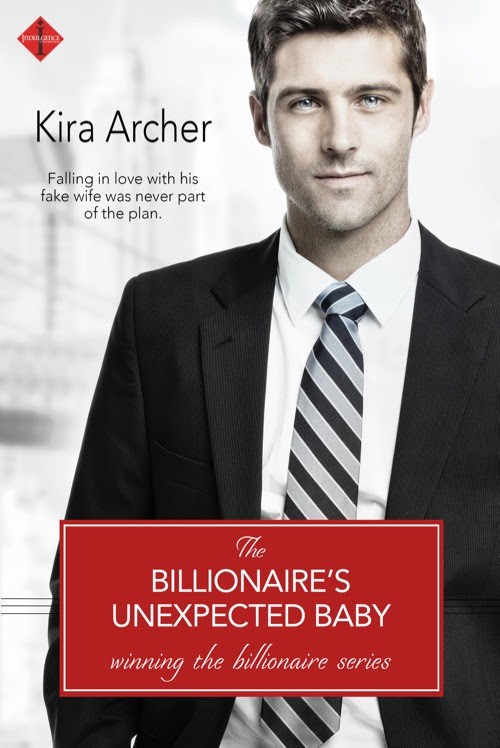 One minute, pregnant Leah Andrews is throwing up over the side of a yacht and the next, she's married to party boy Brooks. It's an arrangement born of sheer desperation to save her job, but now the tabloids are all over them, their friends are running a pool betting on whether they'll actually stay married until Baby Day, and worst of all, she and her new husband might just be falling for one another. But they belong in opposite worlds. It'll never work.

Billionaire app developer Brooks Larson lives his life on the light side. Until he tries to play hero and claims to be Leah's husband. Now he's up to his ears in Lamaze classes, baby powder...and unexpected marital bliss. But he'd make a rotten husband and horrible father. Leah and the baby deserve so much better. Add in major baby daddy drama and the whole situation is the worst idea EVER. But sometimes those bad ideas might just be the best ones.

In The Billionaire's Unexpected Baby (Winning the Billionaire #2) by Kira Archer, Leah Andrews knows her being pregnant could cause problems for her new job, but she never imagined Brooks Larson would be the solution to the problem that arises once the nuns running the school discover her condition. However, marrying Brooks is a bad idea, especially when she's pregnant with another man's baby, and she could very easily fall in love with Brooks. And when the baby's father comes back into Leah's life, will she be able to hold onto what she has with Brooks, or will they lose their shot at happy ever after?

What a very engaging and wonderful read Ms. Archer has delivered in this second book of her Winning the Billionaire series where it was hard not to be affected by everything this couple go through, especially once the baby's father comes back into Leah's life; the dialogue was riveting, as Brooks is charming and does everything he can to prove to Leah that she's made the right decision in marrying him, even though he ends up disappointing her; and the fast-paced storyline kept me entertained from start to finish due to the obstacles these two face on their journey to happy ever after such as the baby's father coming back into Leah's life and making Brooks life a misery because the two men have quite the history.

The way this story started had me liking the hero and heroine immediately, as the hero is determined to win the heroine over, and yet, the moment had me smiling because things don't go according to plan. Moreover, both the main characters were enthralling due to their back stories, their growing relationship and because of the fact that Leah isn't like the women Brooks normally goes for in the way she doesn't care what his money can buy, which means she provides him with a real challenge. Will Leah be able to accept everything Brooks is determined to give her? I also liked how charming and driven the hero was, yet I could n't help but sympathize with him when it came to the moment when he learns who the father of Leah's baby is. Will Brooks be able to handle the fact that the father is someone who he thought he could trust but in the end betrayed him in the past?

While the heroine, she goes through a lot in this story, especially when Brooks and her baby's father come face-to-face and there's such animosity between them. However, she's resilient, courageous and I loved how she handled their rivalry. I also liked the tight friendship she shares with Kiersten, one of the secondary characters, as  the woman gives good advice and is always there when Leah needs her. Yet, what I liked most of all about the heroine is that she gave Brooks a chance, even knowing that he might break her heart, because he doesn't do relationships but was willing to help her.

Overall, Ms. Archer has delivered a really good read in this book where the chemistry between Leah and Brooks was instant and intense; the romance was nicely-detailed and shows how good a marriage of convenience can be, especially when it leads to happy ever after; and the ending had me loving what the hero does to get the heroine to talk to him and that everything worked out for the best between this couple, as they're so good together. I would recommend The Billionaire's Unexpected Baby by Kira Archer, if you enjoy the marriage of convenience trope, the fake relationship trope, or books by authors Victoria Davies, Regina Kyle, Avery Flynn and Jenna-Bayley Burke.

Amazon US I Amazon UK I iBooks I Nook I Kobo

Kira Archer resides in Pennsylvania with her husband, two kiddos, and far too many animals in the house. She tends to laugh at inappropriate moments and break all the rules she gives her kids (but only when they aren’t looking), and would rather be reading a book than doing almost anything else. Most of her non-writing hours are spent hanging with her family and running her kids around because they are busy and she's the taxi driver. She loves her romances a little playful, a lot sexy, and always with a happily ever after. She also writes historical romances as Michelle McLean.