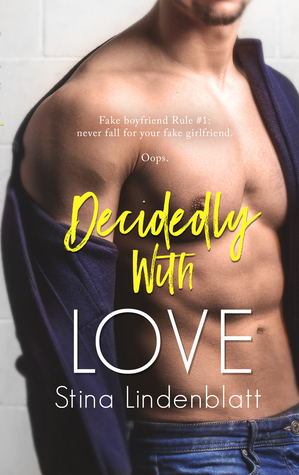 Decidedly with Love
By the Bay #3
By Stina Lindenblatt
Releasing January 15th, 2018
Self-Published

Fake boyfriend Rule #1: never fall for your fake girlfriend.  Oops.
Emma Lovejoy runs Aphrodite’s Boutique, a store that specializes in all things love-related. A store that she adores with all her heart, and which is at risk of being shut down and replaced with a condo development.  Playboy Travis Hamilton was raised by his feisty, well-meaning grandmother, who is determined to help her grandson find The One. But when most women he meets tend to be puck bunnies or women only interested in his hockey-player income—and let’s not forget the nutcase of an ex-girlfriend—why bother?  Travis realizes only a fake girlfriend will deter his grandmother’s matchmaking scheme. Too bad the one woman who can help him is the sexy redhead who wants to assist him as much as she wants her eyeballs to be dunked in hot sauce and barbecued. To convince her, he promises to help her with her own dilemma. But sometimes fire and ice really do mix. Now Travis has to decide if love is in the air—and if together he and Emma make something hotter. Something stronger. Something real.

In Decidedly with Love (By the Bay #3) by Stina Lindenblatt, Travis Hamilton will do anything for his grandmother, but her matchmaking schemes to find him his Ms. Right are getting way out of hand. So, he decides the only way to shut down her schemes is to ask Emma Lovejoy to be his fake girlfriend. But when Travis realizes that Emma is becoming more important to him than what they agreed to, will he run scared or will he convince Emma to give their relationship a real chance?

This series just keeps getting better and better, and Travis is the best hero yet. Really, this book provides plenty of amusement; great characters in both the main and secondary ones; and a fast-paced storyline that I could not get enough of, because the obstacles these two face on their journey to happy ever after are worth overcoming for this couple because Travis and Emma are fantastic together. The way this story started had me amused because of Travis's grandmother and her friends and the way they're acting in Emma's shop. Imagine three elderly women in an adult store that is on the tame side, but still sells things that they'll get enjoyment out of. This moment had me smiling and laughing just as many others did to, as Emma isn't afraid to show Travis she can resist his charm.

Both the main characters were delightful, relatable and I loved from the moment they were introduced to each other, as Travis has no idea who Emma is, even though he should have an inkling because of their past; a past that isn't easy for Emma to forget because she didn't have the easiest of times at school or when it came to her family situation. However, in saying that, I liked  how she's handled everything she's been through and has come out the stronger for it. Really, she's resilient, courageous and I liked that she was willing to help Travis, even knowing it might be a bad idea since she could very easily fall in love with him and that isn't what he wants a fake girlfriend for. Will everything work out for the best?

While the hero, he's confident; charming; has done really well for his life in becoming a fabulous and famous ice hockey player, considering all that he's been through in his past; and I liked the close relationship he has with his grandmother. I could also understand why he would go the fake girlfriend route because of his grandmother's matchmaking attempts that made me feel sorry for Travis. Will his grandmother finally listen to him and stop her attempts? Will having a fake girlfriend help in some way, even if it means disappointing the elderly woman if she discovers the truth of his deception?

Overall, Ms. Lindenblatt has delivered a fantastic read in this book where the chemistry between this couple was powerful; the romance fan-your-face hot and showed how good these two are together; and the ending had me loving the lengths the hero went to in winning back the heroine after things go awry in their relationship. All I can say is lucky Emma. I would recommend Decidedly with Love by Stina Lindenblatt, if you enjoy the fake relationship trope or books by authors Jamie Albright, Amy Brent, Eden Summers and Aurora Rose Reynolds.