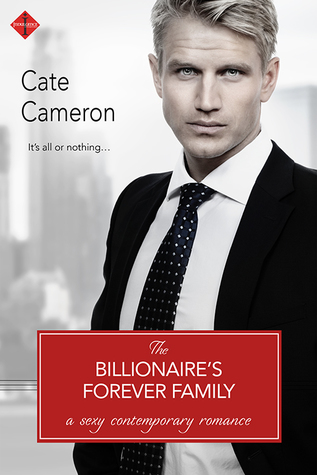 When Cassie Frost reaches out to the biological father of the niece she’s raising, she doesn’t expect him to send in the lawyers. Emily is all the family Cassie has left, and she’ll do whatever it takes to keep her niece. But as the owner of a struggling dinner going up against a billionaire, the odds aren’t in Cassie’s favor.When billionaire Will Connelly learns he has a daughter, he’s determined to have a place in her life—even if that means going head-to-head with her proud, stubborn, and irresistible aunt. It’s clear they both want what’s best for Emily, but Will’s not used to being told he’s wrong, and Cassie doesn’t seem to have a problem letting him know whenever she thinks he’s messing up.Will’s sure they can have it all, even if Cassie is determined to stand on her own two feet instead of being swept off them.

In The Billionaire's Forever Family by Cate Cameron, Cassie Frost never imagined getting in contact with the biological father of her niece would turn into her being faced with the man's lawyers. But when it becomes clear that Will Connelly wants to get to know his daughter, it seems Cassie has a fight on her hands. Yet, with a struggling diner and hardly any money, Cassie knows it's going to be hard to win against a man that has more money than he knows what to do with. Will Cassie walk away from the only family she has left, or will Will be able to convince her that she wants him in her life forever?

What a delightful and captivating read Ms. Cameron has delivered in this book where emotions run high, as the heroine believes she could lose her niece from her life; the main characters are total opposites with the hero having money and the heroine struggling to stay afloat, which is why she needs the hero's help when it comes to providing for her niece who happens to be his daughter; and the dialogue was compelling, as the heroine does her best to keep things platonic with the hero for fear of messing things up for her niece while the hero does everything to get to know her better. Will the hero win the heroine over?

As for the way this story started, it had me sympathizing with the heroine because of what the hero does that gets Cassie's defenses up once he finally decides to honor her with his presence. Will the hero be able to make things right after his initial error in judgment with the heroine? Moreover, both the main characters are fascinating, likeable and I loved the interactions between them, as the hero is determined to get to know Cassie and his daughter better; is ruthless when it comes to getting what he wants; and I liked that he would do everything in his power to prove to Cassie that they don't have to go their separate ways. Doesn't she realize that he wants her in his life just as much as he wants his daughter in his life? While the heroine, she's loyal, hard-working and I liked how she would do anything for her niece, even if it means having to walk away from the only member of her family that she has left. I also liked that she was willing to give the hero a chance, despite what he does in the beginning that makes him seem ruthless and makes Cassie feel unworthy of his time.

Overall, Ms. Cameron has delivered a fantastic read in this book where the chemistry between this couple was intense; the romance shows how good these two are for each other; and the ending had me enjoying the lengths the hero was willing to go to in order to have Cassie in his life. Besides, change is good, especially when you have the best things in life such as love, family and happiness. I would recommend The Billionaire's Forever Family by Cate Cameron, if you enjoy the enemy to lovers trope or books by authors Kira Archer, Miranda Liasson, Regina Kyle and Victoria Davies.