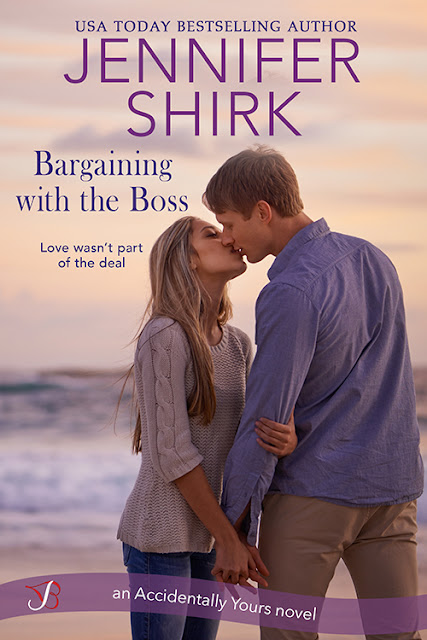 Kinsley just wanted to have some fun for a change. Then she wakes up in a stranger’s bed, with her bridesmaid dress on backward and a hazy memory of what happened at her friend’s wedding. With a quick escape, she can get back to her predictable life. But then she meets her new boss—the same guy she’d woken up next to—and seeing him with a clear head doesn’t make him any less attractive.Mixing business with pleasure has never been Damon’s style, and easily avoided, but the hotel he just bought comes with an unexpected perk—its manager. “Sensible” Kinsley today is as alluring as “impulsive” Kinsley was the night before, and she talks him into a deal. If she can turn around the hotel by the end of summer, he won’t tear it down to put up a more profitable condominiums.Their plan is simple…until falling for each other becomes more than they bargained for.

In Bargaining with the Boss (Accidentally Yours #1) by Jennifer Shirk, Kinsley has always been seen as the 'sensible' one, so waking up next to Mr. Gorgeous the morning after attending a wedding is the most irresponsible thing she's ever done, especially once she discovers he's also her new boss. Even worse, the hotel that once belonged to her family is now owned by him, and unless she can find a way to turn things around, she could lose it forever. Will bargaining with the boss be a good thing, or will Damon St. James break her heart?

What a very entertaining, fast-paced read Ms. Shirk has delivered in this first book of her new Accidentally Yours series, which I read from start to finish in one sitting because of the main characters that had interesting back stories and made me sympathize with their decision in not wanting another relationship; the dialogue had me smiling because of the challenge the heroine provides the hero, as she does everything she can to convince him to allow her to save the hotel with the ideas she has; and the storyline had me loving the obstacles these two have to overcome to be together, especially since it seems the hero holds the heroine's future in her hands and falling in love with him could end in disaster if she's not careful.

The way this story started introduces the heroine and part of her back story really well, and it's true that she can't let what her fiancé did keep her from finding happiness again. Really, why should she let her ex-fiancé's words continue to hold her back? However, it was from the moment the hero and heroine come face-to-face for the first time in this story that completely drew me in, as the hero is charming and definitely brings out a little flirtatious side in the heroine, which had me laughing at the heroine's dialogue in this moment.

Both the main characters were relatable, likeable and kept me entertained from start to finish with their back stories, their growing relationship and their strong chemistry, which just keeps getting stronger and stronger as the heroine challenges the hero to give her a chance before he makes any big decisions that could impact her life. Moreover, the heroine is strong and brave with everything she's through, especially when it comes to the things her fiancé said to her. Yet, in saying that, I liked that she didn't allow his words to continue to hold her back and that she would do anything to prove her fiancé wrong, which is proven in the moment when she finally faces her past. While the hero, he's been through a lot in his life too and I could understand why he has such guilt because of what happened to his brother. Yet, in saying that, I liked that he finally faced his past too, so he and his father could have a better relationship. I also liked how determined the hero was to give the heroine what she wanted, especially after things go awry between them and he has to fight for their relationship.

Overall, Ms. Shirk has delivered a wonderful read in this book where the ending had me loving what the hero does to win back the heroine after their relationship goes awry. However, it was the epilogue that wrapped this story up brilliantly, as Damon has such a great surprise for the heroine. I would recommend Bargaining with the Boss by Jennifer Shirk, if you enjoy books by authors LE Rico, Jody Holford, Annie Seaton and Sonya Weiss.

Damon pierced her with his blue-eyed gaze for several long seconds, as if debating something in his mind before finally taking hold of her hand. “Good night, Kinsley.” Then he leaned in and brought his mouth across hers. Once she got over the shock of his lips on hers, she kissed him back, tightening her grip on his hand for balance.

Oh, but he had a nice, soft, giving mouth, like their lips were two puzzle pieces fitting perfectly together. The world around her disappeared as he wove his hands into her hair, tilting her head back. He trailed light kisses down her neck, bringing every nerve in her body to high alert and begging for even more of his touch. She’d never felt like this before with a man—maybe it was the excitement of him being a virtual stranger or maybe just the man himself, but her body came alive. She didn’t want it to end.

And for once in her sensible life, she wanted to do the insensible thing.

She eased back slowly, gaining confidence when she heard him exude a low moan. “Um, yeah, well then.” She licked her lips, growing dizzier when she tasted him again. “On second thought, maybe…we don’t have to say good night just yet. I mean, if you’re still interested,” she hastily added.

Jennifer Shirk is a USA Today bestselling and award-winning author of sweet (and sometimes even funny) romances for Montlake Romance and Entangled Publishing. She loves coffee, wine, the people living in her house and God. (Not necessarily in that order). Strong literacy and library advocate as well.

She resides in a beach resort in NJ, so when she's not writing or working on her tan, she's taking care of her most treasured possessions: her husband, daughter, puppy (Sox) and four hermit crabs.

Lately she's been on a serious exercise kick. But don't hold that against her.