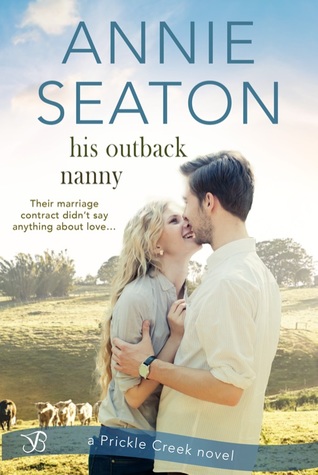 Jemima Smythe is over the world of fashion. But when her dream of teaching falls through, Jemmy is determined to show her hometown she’s ready to put down roots. Three beautiful and boisterous kids in need of a nanny offer her an opportunity to prove just that. But their smoking-hot dad, Ned, offers her another—become his wife, as a matter of convenience only.Ned McCormack is at his wits’ end. A single father to three kids, he quit the city and moved home to the Australian Outback in order to spend more quality time with his family. Unfortunately, the farm needs a lot of work. Just when he’s ready to give up, help comes unexpectedly in the form of a supermodel mistaken as his wife-to-be. Not a bad arrangement, if only they can stick to the rules of their strictly-business marriage—no kissing and absolutely no falling in love allowed.

In His Outback Nanny (Prickle Creek #3) by Annie Seaton, Jemima Smythe is home and ready to start a new career as a teacher, as long as she can find a job. However, for the time being, she's determined to get some experience with kids and what better way to do that than offer Ned McCormack help with his children. Jemima never imagined being Ned's wife would feel as good as it does, but when it comes time to walk away, it's not easy. Will Ned and Jemima give their marriage a real chance, or will they walk away from their chance to be completely happy?

Having really enjoyed the first two books of this series and getting to know a little about Jemima, I couldn't wait to dive into this book, and I've got to say that it's the best story yet. Not only because it encompasses the brother's best friend trope, but because the main and secondary characters were fantastic; the dialogue was a wonderful combination of intense moments and enthralling banter between the characters; and the storyline had me loving the obstacles these two had to overcome to be together. Will the pair be able to protect the kids from hurt when they go their separate ways, especially since the kids come to love Jemima so much? Will both be able to stick to the arrangement they've made without things getting too complicated? Will Ned be able to let go of his past to give a relationship with Jemima a real chance?

Both the main characters were relatable, likeable and I loved every interaction between them, as they begin to get to know each other again. I also liked the heroine's interactions with the hero's children, as she wins them over and it isn't easy for her to be able to walk away. Yet, the heroine is resilient, brave and I liked how hard she's worked to get to where she in her life. Really, she's done well for herself in her modelling career, but I liked how determined she was to become a teacher and hopefully prove she's more than just a pretty face. While the hero, I liked how determined he was to make things better for his children by making the move that he has in order to spend more time with them after losing their mother. I also liked that he takes Jemima up on her offer, even though it's not easy for him to take advantage of such fortune.

Overall, Ms. Seaton really impressed me with this book where the chemistry between this pair was intense; the romance on the sweet side, but definitely showed how right these two are for each other; and the ending had me so happy that the hero makes things right with the heroine because Ned needs Jemima to fully heal from his past. However, it was the epilogue that wrapped this story up nicely because of the heroine's surprise. I would recommend His Outback Nanny by Annie Seaton, if you enjoy the brother's best friend trope or books by authors Fleur McDonald, Nicki Edwards, Margaret Way and Rachael Johns.