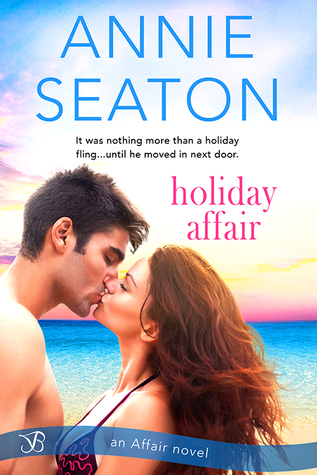 In Holiday Affair (Affair #1) by Annie Seaton, Lissy McIntyre would rather settle for mutual respect in a relationship than love, so Nick Richards would be the last person she should get involved with, especially when he's not the settling down type. However, the moment she meets him, she finds it hard to stay away because of the sizzling chemistry and their heated kisses. Will Nick realize that Lissy is his Ms. Right before it's too late, or will he let his past cost him this chance at happy ever after?

What a delightful read Ms. Seaton has delivered in this first book of her Affair series, which provided the perfect combination of emotion, chemistry and tension that had me reading quickly determined to discover whether these two would get their happy ever after, considering this couple's relationship keeps moving one step forward then two steps back. Seriously, they come off as enemies half the time, as she knows Nick isn't a man ready to settle down and give her the kind of love she deserves.

As for the dialogue, it was riveting and intense due to the way the main characters interact with each other and their back stories. The hero has been hurt by past relationships and isn't willing to be hurt again, which is understandable. Yet, at the same time, the heroine is good for him. Will he see that Lissy is his Ms. Right before it's too late? Moreover, I liked the hero's confidence and his playfulness, as he sways the heroine's decision. She should be wanting love, not to settle for mutual respect and just liking someone. While the heroine, she's hard-working, independent, and I liked how determined she was to resist the heroine, although it seems inevitable that they'll give into their chemistry sooner rather than later. I also liked how much of a challenge the heroine presented for the hero. Nick's charm doesn't work on her as much as he hopes.

Overall, Ms. Seaton has delivered a really good read in this book where the chemistry between this couple was powerful; the romance on the sweet side; and the ending had me worried for one of the main characters, but had me so happy because of the words the hero says to the heroine to prove to her that she's the one for him. I would recommend Holiday Affair by Annie Seaton, if you enjoy the enemy to lovers trope or books by authors LE Rico, Jody Holford, Charlee James and Barbara DeLeo.

Staid professor Lissy McIntyre believes that choosing a mate should be based on common sense, not runaway passion. And she would certainly never pick a rolling stone like Nick Richards for long-term love. But a red-hot, tropical romance? Oh, yeah. He’s got a body just made for sinning and his sizzling kisses leave her senseless.
When Nick blows into town, he’s stunned to discover that his no-nonsense new neighbor and co-worker is the same sultry creature he seduced for one night of forbidden island pleasure. He’s unaccustomed to staying in one place for long, but he just can’t seem to keep his hands off the multi-faceted woman. Will Nick break loyal Lissy’s heart or will she be the one woman he simply can’t walk away from?