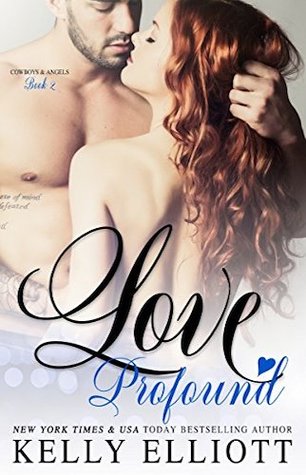 I write about love, but I’ve never experienced it. Sure, I’ve been with guys that I cared about. Even thought I found ‘the one’. He turned out to be the frog and not the prince.A few Frank Sinatra songs and a wildly handsome cowboy who calls me Darlin’, will have me second guessing everything I ever thought I knew about love. Does happily ever after really exist…or is it only something I write about in books?

In Love Profound (Cowboys and Angels #2) by Kelly Elliott, Amelia Parker writes about love and happiness, but she can't seem to find it for her own life. But then she meets Wade, a friend of her brother's, and it feels like she's finally met The One. Getting to know Wade is great, but when her brothers find out she's with him, will they be happy for her or will they ruin her chance at happy ever after?

Having absolutely loved the first book of this series, I couldn't wait to read more of the Parker family, and I've got to say that Amelia and Wade's story was just as enthralling and wonderful as the first book. Really, it had incredible main and secondary characters that had me laughing because the Parker family talk about everything and anything, no matter that the topic might be something the others don't want to hear. Sex always seems to be a topic for discussion when the siblings are together.

Both the main characters are fantastic and I loved every moment they conversed, as there's so much chemistry between these two that it feels as if the pages will be set alight once their relationship goes from platonic to physical intimacy. Moreover, the heroine is sassy, fun, hard-working when it comes to her writing and I liked how determined she was to win the hero over because they should be together and shouldn't let the fact that he's her brother's friend keep them apart. While the hero, it hasn't been the easiest of times for him lately, which is how he ended up working for the Parker family. Really, I could understand why he needed to get away from his old life and I liked how he fits in with the Parker family. Yet, what I liked most of all about Wade was that he was confident in going after what he wanted and what he wanted was Amelia, even though it was hard for him because he's also loyal and he doesn't want the heroine's brothers to end their friendship for being with the guy's sister. Will Wade be able to prove to Trevor that he and Amelia deserve to be with each other since he really is good for the heroine?

Overall, Ms. Elliott has delivered another fantastic read for this series where the chemistry between this couple was off-the-charts; the romance was steamy and really passionate; and the ending had me loving that these two were willing to fight for their happy ever after and that they weren't going to let anything stand in the way. I would recommend Love Profound by Kelly Elliott, if you enjoy the brothers friend trope or books by authors Vi Keeland, Penelope Ward, Lauren Blakely and Melanie Harlow.