REVIEW: THE HUNT by CHLOE NEILL 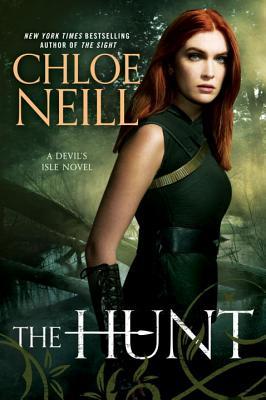 From the New York Times bestselling author of the Chicagoland Vampires Novels--the hunter becomes the hunted in a New Orleans devastated by a Paranormal war....
When bounty hunter Liam Quinn discovered that Claire Connolly was a Sensitive and infected with magic, he should have turned her in to be locked up in the prison district known as Devil's Isle. Instead, he helped her learn to control her power and introduced her to an underground group of Paranormals and humans who know the truth about the war and those who fought it.
Now the weight of Liam's own secrets has forced him into hiding. When a government agent is killed and Claire discovers that Liam is the prime suspect, she races to find him before the government can. But she'll discover proving his innocence is no simple matter. Their enemies are drawing closer, and time is running out....

In The Hunt (Devil's Isle #3) by Chloe Neill, being apart from Liam Quinn has been hard for Claire Connolly, but she's doing her best to cope with the distance he's put between them since he now has his own secret he needs to keep hidden. But when Liam is accused of murder, Claire will do everything in her power to prove his innocence, no matter how hard it is to work alongside him to do just that. Yet, the more they investigate, the more dangerous things begin to come. Will Claire be able to help Liam prove he's innocent, or will time run out for the pair?

This series just keeps getting better and better, and this third book of Ms. Neill's Devil Isle series is the best yet, and has me looking forward to where this author takes readers next. However, with this book, it takes readers on quite the adventure filled with plenty of suspense and action, as Liam and Claire work to prove his innocence, which isn't easy. Will Liam find out who is setting him up to take the fall for the murder? Will he be able to protect Claire from the danger that seems to be drawing closer and closer?

As for the way this story started, it definitely had me hooked and as the story progresses, it becomes exciting in terms of the danger and what Claire and Liam have to do to keep themselves safe. However, I couldn't help but feel sorry for Claire in the beginning, as she's lost a lot in her life. Yet, at least she's given a purpose with Liam in big trouble. Moreover, Claire and Liam are brilliant characters and I love how Claire helps him to deal with the incredible but dangerous power he has that could cost him everything. I also liked how resilient and courageous Claire is when it comes to confronting Liam and standing up to him when he was being difficult. Since things between them are rocky with Liam not trusting himself to be around Claire because he believes it's too dangerous for her. Will they ever be able to get back to the way things were? Will Liam trust Claire to be able to take care of herself when she's around him if his power gets out of hand?

Overall, Ms. Neill has delivered an exceptional read in this book where the chemistry between Liam and Claire is still as strong as ever; and the ending had me on the edge-of-my-seat and worried for the main characters. Will they come out on top against the bad guys? I would recommend The Hunt by Chloe Neill, if you enjoy Science Fiction and/or Fantasy books or books by authors Darynda Jones, Nalini Singh, Keri Arthur and Devon Monk.