Can Kyra and Dax let go so easily—
or has love become a preexisting condition? 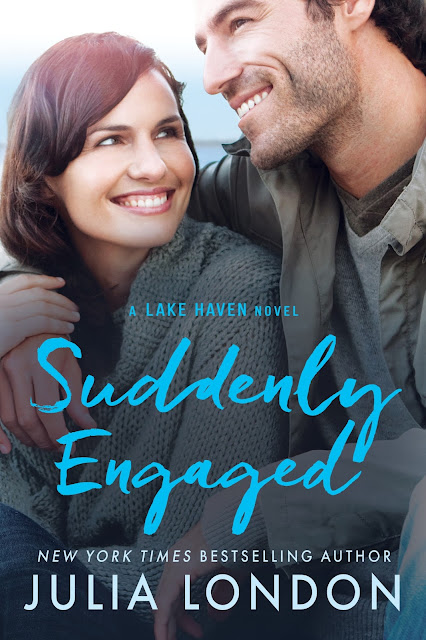 In Suddenly Engaged (Lake Haven #3) by Julia London, being a single mother isn't easy for Kyra Kokinos, but she's managing the best she can. However, her daughter Ruby is too precocious for her own good, and doesn't know when to leave well enough alone. Annoying their neighbor Dax Bishop seems to be her latest adventure, and Kyra doesn't have a clue how to get her to stop. Yet, when Kyra discovers Ruby needs life-saving surgery, she discovers Dax is the one person she can count on to get her through the difficult time, especially with his willingness to propose marriage to help her solve a major problem. Will Kyra and Dax achieve their happy ever after, or will their relationship crumble before it's ever really begun?

Ms. London always manages to impress me with her stories, and I thoroughly enjoyed this book, not only because of the way it started with the prologue and the burning question it left me with as a reader in what decision the heroine would make, but because of the heroine's daughter and the bond she shares with the hero, as they figure out how to live next door to each other without Dax continuing to be annoyed by the little girl's presence. However, it was from the moment the hero and heroine came face-to-face for the first time that drew me into this story completely, as the heroine is struggling to manage everything in her life and the hero only adds to her problems. Will they find a way to get along?

Seriously, everything about this story -- the well-written dialogue, the main characters and their fascinating back stories, and the secondary characters and their need to see Dax happy -- had me reading quickly, determined to discover what Dax and Kyra will go through on their journey to happy ever after. Will Kyra be able to find a way to break through the high walls the hero has built when it comes to relationships? Will the hero realize that second chances are possible?

Moreover, the heroine is strong, brave and she's a great mother that would do anything for her daughter. Certainly, it's been a struggle over the years being her child's only support, but she made the right decision all those years ago. I also sympathized with her when it came to what was happening with her daughter's health. She's already lost someone she loved to the same manner and there's no way she can lose her daughter, and I liked how far she was willing to go to make sure her daughter was all right. While the hero, his last relationship ended in disaster and is even more complicated with what's going on with his ex. Will he be able to handle the complication? I also enjoyed the growing bond between the hero and the heroine's daughter, as Ruby is one determined little girl.

Overall, Ms. London has penned a delightful read in this book where the chemistry between the hero and heroine was strong, the romance absolutely hot and illustrates how much these two need each other to move on from their past relationship woes, and the ending left me completely satisfied as the heroine knows what she wants and is determined to show the hero how much she wants forever after with him. However, it was the epilogue that wrapped this story up nicely, because get togethers can be so much fun, especially when there's a surprise to be revealed. I would recommend Suddenly Engaged by Julia London, if you enjoy the opposites attract trope or books by authors Jamie Beck, Terri Osburn, Jennifer Probst and Catherine Bybee.


Single mother Kyra Kokinos spends her days waiting tables, her nights working on her real estate license, and every spare moment with her precocious six-year-old daughter, Ruby—especially when Ruby won’t stop pestering their grumpy next-door neighbor. At first glance, Dax Bishop seems like the kind of gruff, solitary guy who’d be unlikely to offer a cup of sugar, let alone a marriage proposal. But that’s exactly what happens when Ruby needs life-saving surgery.

Dax showed up in East Beach a year ago, fresh from a painful divorce and looking for a place where he could make furniture and avoid people. Suddenly his life is invaded by an inquisitive munchkin in sparkly cowboy boots—and her frazzled, too-tempting mother. So he presents a practical plan: his insurance will help Ruby, and then they can divorce—zero strings attached.


But soon Kyra and Dax find their engagement of convenience is simple in name only. As their attraction deepens, a figure from the past reappears, offering a way out. Can Kyra and Dax let go so easily—or has love become a preexisting condition?

Dax walked out onto the porch and stood with his hands on his hips as the girl brazenly advanced.

She was about to learn that she couldn’t make a little girl’s social call whenever she wanted. There were rules in this world, and Dax had no compunction about teaching them to her. Clearly someone needed to. He responded to her greeting with a glower.

“Hi!” she said again, shouting this time, as if he hadn’t heard her from the tremendous distance of about six feet.

“What’d I tell you yesterday?” he asked.

“To stay on the other side of the fence.”

“Then why are you over here?”

“I forgot.” She rocked back on her heels and balanced on them, toes up. “Do you live there?”

“No, I just stand on the porch and guard the fence. Yes, I live here. And I work here. And I don’t want visitors. Now go home.”

“My name is Ruby Kokinos. What’s yours?”

What was wrong with this kid? “Where is your mother?”

“Then is your dad home?”

“My daddy is in Africa. He teaches cats to do tricks,” she said, pausing to twirl around on one heel. “Big cats, not little cats. They have really big cats in Africa.”

“Whatever,” he said impatiently. “Who is home with you right now?”

“Mrs. Miller. She’s watching TV. She said I could go outside.”

Great. A babysitter. “Go home,” he said, pointing to Number Three as Otto wandered over to examine Ruby Coconuts, or whatever her name was. “Go home and tell Mrs. Miller that you’re not allowed to come over or under that fence. Do you understand me?”

“Yes.” She giggled as Otto began to lick her hand, and went down on her knees to hug him. “I always always wanted a dog, but Mommy says I can’t have one now. Maybe when I’m big.” She stroked Otto’s nose, and the dog sat, settling in for some attention.

“To, um, to tell Mrs. Miller to stay over there,” she said, as she continued to pet the dog. “What’s her name?”

“It’s a he, and his name is Otto. And I told you to tell Mrs. Miller that you are supposed to stay over there. Now go on.”

She stopped petting the dog, and Otto, not ready for the gravy train of attention to end, began to lick her face. Ruby giggled with delight. Otto licked harder, like she’d been handling red meat. Frankly, it wouldn’t surprise Dax if she had—the kid seemed like the type to be into everything. She was laughing uncontrollably now and fell onto her back. Otto straddled her, his tail wagging as hard as her feet were kicking, trying to lick her while she tried to hold him off.

Nope, this was not going to happen. Those two useless beings were not making friends. Dax marched down off the porch and grabbed Otto’s collar, shoving him out of the way. “Go,” he said to the dog, pointing to his cottage. Otto obediently lumbered away.

Dax turned his attention to the girl with the fantastically dark red hair in two uneven pigtails and, now that he was close to her, he could see her clear blue eyes through the round lenses of her blue plastic eyeglasses, which were strapped to her face with a headband. She looked like a very young little old lady. “Listen to me, kid. I don’t want you over here. I work here. Serious work. I can’t be entertaining little girls.”

She hopped to her feet. “What’s your name?”

Dax sighed. “If I tell you my name, will you go home?”

She nodded, her, long pigtails bouncing around her.

She stared at him.

Ruby giggled and began to sway side to side. “That’s not a real name!”

“It’s as real as Ruby Coconuts.”

“Not Coconuts!” She squealed with delight. “It’s Ruby Kokinos.”

“I’m a lot older than you,” he said and put his hands on her shoulders, turning her around.

“Great. Good luck with that,” he said as he moved her toward the fence.

“My shoes light up,” she informed him, stomping her feet as they moved. “My mom says they’re fancy. They’re my favorites. I have some sneakers, too, but they don’t light up.”

They had reached the fence, thank God, before the girl could give him a rundown of her entire shoe collection. Ruby dipped down, apparently thinking she’d go under again, but Dax caught her under her arms and swung her over the fence, depositing her on the other side.

Ruby laughed with delight. “Do that again!”

“No. This is where our acquaintance comes to an end, kid. I don’t have time to babysit you, get it?” 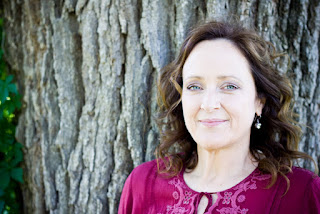 Julia London is the New York Times, USA Today, and Publishers Weekly bestselling author of more than forty romance novels. Her historical titles include the popular Desperate Debutantes series, the Cabot Sisters series, and the Highland Grooms series. Her contemporary works include the Lake Haven series, the Pine River series, and the Cedar Springs series. She has won the RT Book Club Award for Best Historical Romance and has been a six-time finalist for the prestigious RITA Award for excellence in romantic fiction. She lives in Austin, Texas.