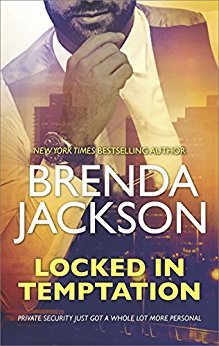 In Locked in Temptation (The Protectors #3) by Brenda Jackson, having been hurt by love in the past, Joy Ingram has put all her time into being a brilliant police detective. However, she's never had such an undeniable connection to a man before, and so she finds it hard to stay away from Stonewall Courson. Yet, her job has always come first and that's not going to change, especially when she's tasked with investigating the murder of a woman that she discovers was part of an underground surrogate baby-making ring. Will Joy find the people responsible, or will the threat she poses to bringing down the ringmasters put her in danger she may not be able to get out of?

This is the first book I've read by Ms. Jackson and the first I've read in this series, but once I finished it, I have plans to read the previous books of this series, as the secondary characters were just as intriguing as the main ones and the dialogue was intense and gave me -- as a reader -- a good dose of knowledge in what the secondary characters have had to overcome to be together. The way this story started had me enjoying both the main characters, especially the hero, as he has plans that consist of getting the long-awaited date he wants with the heroine. Will their night go uninterrupted? Will the heroine agree to the heroine's plan or will he have to use whatever means necessary to get a date with Joy?

As for the dialogue, it was intense due to the main characters back stories and Joy's investigation into the murder of a woman that was part of an underground surrogate baby-making ring. Will she find the answers she's looking for? What danger will she face the more invested she becomes in her investigation? Moreover, the dialogue wasn't only told from the points-off-view of the hero and heroine, but also some of the secondary characters.

Both the main characters were fantastic and I loved every moment they conversed, because this couple bring out the best in each other. Furthermore, Joy is smart, tenacious and I liked that she took a chance on Stonewall, even though her last relationship has left her wary of ever giving happy ever after a chance. While Stonewall, I loved the ways he convinced Joy to give him a chance, most especially what he did at the beginning to get her to finally go on a first date with him. He's confident and I liked how protective he was of the heroine, even though she's tough enough to fight her own battles when it comes to arrogant men that believe she shouldn't have gotten the promotion she did and going up against the people running the surrogate baby-making ring. I also liked the tight friendships he shared with the secondary characters and how they teased him when it came to his relationship with Joy. It's palpable they want Stonewall to find the kind of happiness they've all found and it's obvious that Joy makes him happy. Yet, what I liked most of all about the hero is how he's managed to overcome his past and that Joy was willing to take a chance on him, even though he's been on the other side of the law.

Overall, Ms. Jackson has penned a thrilling read in this book where the chemistry between this couple was explosive; the romance full of exquisite heat and passion that did justice to this couple's intense chemistry; and the ending had me on the edge-of-my-seat with what Joy faces to get justice for the victims of the baby-making ring. However, it was how things turned out between Stonewall and Joy that I really loved, because after what they go through at the end, there's no way that either can deny how they truly feel for each other anymore. I would recommend Locked in Temptation by Brenda Jackson, if you enjoy romantic suspense, the friends to lovers trope or books by authors Maisey Yates, Maya Banks, Katie Reus and Susan Stoker.

BLURB
His job is to protect her…no matter the cost.

Police detective Joy Ingram’s connection to elite security expert Stonewall Courson is instant. Undeniable. Electric. But her commitment to protect and serve has always come first. Everything else is secondary — especially when she uncovers an underground surrogate baby-making ring. Joy can’t risk a distraction during the most important case of her career, not even one as sexy as reformed ex-con Stonewall.

There are few things Stonewall values more than a strong woman. But when Joy’s investigation draws her into a deadly conspiracy that goes deeper than she ever imagined, he must convince her that he’s the best man to protect her. And while he puts his life on the line to save hers, the insatiable attraction between them becomes the one danger neither of them can escape.