Three estranged sisters inherit their late father’s failing hockey franchise
and are forced to confront a man’s world, their family’s demons,
and the battle-hardened ice warriors skating into their hearts. 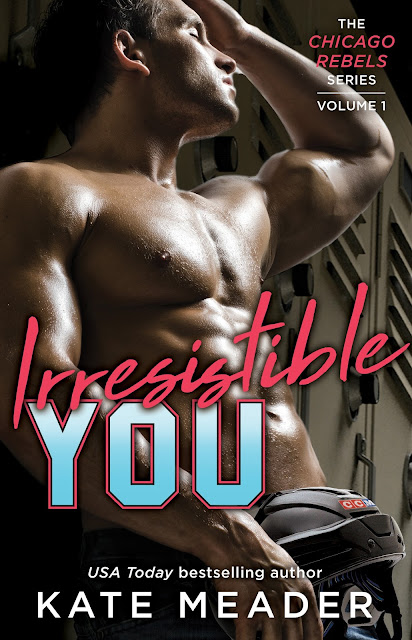 In Irresistible You (Chicago Rebels #1) by Kate Meader, Harper Chase can't believe what her father has done with her inheritance, which she's forced to share with her two estranged sisters. However, she's determined to make the most of it now that she's the most powerful woman in the NHL. Turning around the Chicago Rebels is going to take a lot of effort, but Harper believes she has the ability to help the team bounce back from their years of being a hot mess. Yet, she needs help and Veteran center Remy 'Jinx' DuPre seems the man to be able to help her. The question is -- has she picked the right man or will Remy be a distraction that Harper doesn't need if she's to make the Chicago Rebels one of the best teams in the league?

Reading a book by Ms. Meader is always fun and enjoyable, and this first book of her Chicago Rebels series had me enthralled due to the main characters back stories and their growing relationship; the secondary characters in Remy's family that show Harper the joy she never experienced with her own family; the dialogue that had me charmed by the hero and his determination to get his way if he's going to help Harper make the Chicago Rebels successful; the tough obstacles these two face on their journey to happy ever after including the scrutiny Harper may face by being involved with a player; and the ending that had me charmed by the heroine's bravery because Remy is important to her. The way this story started had me liking the heroine immediately, as she isn't afraid to do whatever it takes to turn the Chicago Rebels around from the dismal team they are into something great. Will she be able to make Remy understand where she's coming from? Will he begin to take being part of the Chicago Rebels seriously?

As for the dialogue, it was compelling and a delightful mix of intense moments due to the main characters back stories and teasing banter that had me loving how charming Remy is. He knows his worth as a player and isn't afraid to use that to his advantage. Will Harper realize that making the deal Remy proposes is the only way to help her team? Moreover, the main characters were fantastic and I loved every moment they conversed. Harper has it tough in being a woman cementing herself into a man's world, but she's certainly determined to turn her late father's failing hockey franchise around. Will she and her sisters be succeed? I also liked how Harper did her best to grow closer to her sisters, even if it meant opening up to them about her resentment towards their father and what happened to her to make her stress the rule to her sisters about not getting involved with any player on the team, even though she manages to break her own rule.

While the hero, it's understandable why he's earned the nickname Jinx, but I liked that it didn't stop him from playing the game he loves and doing everything in his power to make sure this season he can turn his luck around. I also liked how charming and determined Remy was to help the heroine, even though he's un-cooperative until the pair compromise and he gets what he wants. Yet, what I liked most of all is how protective Remy was of the heroine when it came to her ex and the bond Remy forms with his new teammates and how the men weren't afraid to offer advice when it comes to Harper and the decision Remy has made about continuing to be part of the team or not.

Overall, Ms. Meader has penned an incredible and scorching read in this book where the chemistry between this couple was intense and the romance full of exquisite heat and passion that lights up the pages and made me think Harper was a lucky woman. The way this story ended had me smiling because of the heroine's bravery and what she does to prove to Remy that she wants him in her life. However, it was the epilogue that wrapped this story up nicely, because of Remy's words to prove to Harper how important she is to him and Harper's reaction which had me amused. I would recommend Irresistible You by Kate Meader, if you enjoy sports romances, the opposites attract trope, or books by authors Lisa B. Kamps, Kelly Jamieson, Toni Aleo and Sawyer Bennett.

Harper Chase has just become the most powerful woman in the NHL after the death of her father Clifford Chase, maverick owner of the Chicago Rebels. But the team is a hot mess—underfunded, overweight, and close to tapping out of the league. Hell-bent on turning the luckless franchise around, Harper won’t let anything stand in her way. Not her gender, not her sisters, and especially not a veteran player with an attitude problem and a smoldering gaze designed to melt her ice-compacted defenses.

Veteran center Remy “Jinx” DuPre is on the downside of a career that’s seen him win big sponsorships, fans’ hearts, and more than a few notches on his stick. Only one goal has eluded him: the Stanley Cup. Sure, he’s been labeled as the unluckiest guy in the league, but with his recent streak of good play, he knows this is his year. So why the hell is he being shunted off to a failing hockey franchise run by a ball-buster in heels? And is she seriously expecting him to lead her band of misfit losers to a coveted spot in the playoffs?

He looked uncomfortable standing there, balancing on his skates, ready to spring for the door. But she knew he wouldn’t sit while she stood because his mother had raised him to respect women. Something fluttered in her chest at that notion. DuPre might be a lot of things—ladies’ man, good ol’ boy, thorn in her side—but she suspected he would never hurt someone weaker than himself.

“Do you remember what I told you in Boston, DuPre?”

“Somethin’ about needin’ me to instill leadership and help these boys get to the playoffs.” Warm honey flowed through her veins at the timbre of his voice. She could have sworn her panties slipped an inch.

“I did say that. I meant it. And I thought you understood.”

He rubbed his chin, the scrape against stubble delicious to her ears. All he was missing was a Stetson, a blade of grass, and some flighty piece in a cropped tank and Daisy Dukes. “I understood the words because you’d put them together in a highly entertainin’ way, and to certain ears, they might make sense. Then I told you what needed to happen to ensure my cooperation.”

This nonsense stopped here. “Is that why you’re playing like you can barely walk, much less skate? What’s wrong, old man? Feeling a touch of arthritis in your joints?”

For a brief moment, she thought she might have found his weakness: vanity. But no. He merely threaded his arms over his chest—over the Rebels logo of a big C with a hockey stick and a cutlass crossed behind it—and cocked his head.

“You’re gonna have to use a little more finesse, Harper.”

More surprising than the fact Remy had used the word finesse correctly in a sentence was that he didn’t seem annoyed with her. He seemed . . . amused. As if she were a toy he could happily bat around like a kitten would a semiconscious mouse.

Applause sounded, signifying the beginning of the final period. Neither of them moved, hands metaphorically hovering at their hips like Old West gunfighters.

“The trade deadline,” she said, feeling livid and helpless. “Give me that.”

Three months. The all-star game, held in late January, was traditionally viewed as the halfway point of the season. On the cusp of the busy trade period, it led into a month of bartering and haggling as everyone lined up their teams for the big push to the playoffs.

At her hesitation, he leaned in, those cobalt blues flashing. It wasn’t enough to unholster her gun; she should have already taken her shot, and that delay was her undoing.

“Would you rather three months of my full effort or a whole season of my skatin’ like I’m playin’ squirt hockey?”

“You can’t seriously be reducing this to a game of ‘would you rather’?”

His voice dropped to an intimate tone, her panties another inch with it. “If you shake on it now, I’ll begin that full effort tonight.”

The siren blared in the distance, followed by the home crowd’s roar. Five zip. Harper didn’t enjoy being blackmailed, but she enjoyed losing even less.

She thrust her hand forward impatiently. He took it in his firm grasp. That electricity setting her skin aflame was her body telling her she’d made the right decision. Nothing else.

“You have a game to finish.”

He held on, and now he inclined his head so close she could count each and every one of those pretty-boy eyelashes. Her pulse rate spiked, and she was certain he could sense it. Sense her heart thumping rabbit kicks, her vein pulsing in her throat.

“We’ve shaken on it now, minou, so don’t you dare think about welshing. I might sound like I spend my spare time spitballin’ from the rockin’ chair on my porch, but don’t let my accent fool you none. I’m not the kind of man you want for an enemy. We clear?”

She might have rolled her eyes if she wasn’t just a wee bit impressed by his chutzpah. Still, he needed to be informed that while he might have won this battle, the war was far from over.

“Try not to trip on your way to the rink, DuPre.”

He laughed, deep and robust, clearly delighted with himself. Idiot. His thumb pressed against her inner wrist, and a crackle of energy leeched from him into her body.

“You feel that, Harper?”

She snatched back her hand. “If you mean my goodwill evaporating with every second you’re standing here, then, yeah, I feel it.”

They were. Oh, God, they were. “Why are you still here again?”

His mouth curved. “Lady, I got the distinct feelin’ these next few months are gonna be fun.”

He picked up his stick and, with more grace than a six-foot-two brute wearing skates on dry land should possess, he left the locker room.