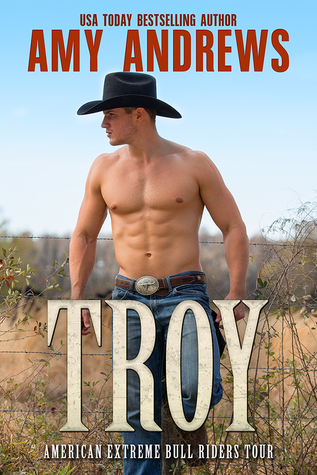 In Troy (American Extreme Bull Riders Tour #5) by Amy Andrews, Joss Garrity knows what it's like to lose someone she loves suddenly, so she's determined not to fall in love again. However, somehow fate keeps throwing Troy Jensen in her path whether it's in the way of helping her fix a tyre or bringing her delinquent son home to be reprimanded or Troy ending up in her ER due to suffering an injury while trying to get back in the big league as a bull rider. Will Troy be able to convince Joss to give them a shot at happy ever after, or will the age difference between them keep Joss from taking a chance?

Ms. Andrews always pens a fantastic story with anything she writes, and this book was wonderfully entertaining, fast-paced and a story I read from start to finish without any interruptions. Since the main characters are highly enjoyable; the dialogue had me smiling all the way throughout as Troy teases and tempts the heroine; and the obstacles these two face had me cheering for this couple's happy ever after because they weren't easy obstacles to overcome such as the age difference between them and the dangers of Troy's career as a bull rider. Joss has already lost someone she loves, so how can she get involved with Troy when he does something so dangerous for a living without doing everything in his power to keep safe?

Both the main characters were fascinating and I could understand why neither wanted a relationship. There's a few years between them, making Joss a cougar, but I liked that Troy won her over because they're good together and have so much chemistry that heats up the pages with fan-your-face sex scenes. Moreover, the heroine is strong, brave and I liked the decisions she made for herself, her son and their future. I also liked how caring she is as a doctor and that she would do a lot for her patients, which is proven by what she does for Troy. Yet, what I liked most of all about the heroine was the way she repaired her relationship with her wayward son with the help of the hero.

While Troy, I couldn't help but empathize with him when it came to how things were between him and his family. Yet, in saying that, he's lucky to have found someone willing to give him a chance and help him turn things around in his life to be the wonderful man he is. I also liked how confident, courageous and determined he was to get his bull riding career back on track, even though Joss is making him think that life after bull riding could be a good thing. Yet, what I liked most about the hero is how he helped the heroine's son and how good he was for the teenage boy that had lost his way.

Overall, Ms. Andrews has penned another really good read in this book where the secondary characters in Joss's father-in-law and her son had me liking the close bond they shared and that the older man could offer advice that he knows the heroine needs to hear. The way this story ended was absolutely wonderful beause of the plans Troy has for their future and his determination to convince Joss to take a chance on a future with him. However, it was the way the heroine shows Troy that she wants a relationship with him that I liked the most about the ending because he needs him just as much as he needs her. I would recommend Troy by Amy Andrews, if you enjoy books encompassing cowboys or books by authors Sarah Mayberry, Katherine Garbera, Megan Crane and Jeannie Watt.

BLURB
Cocky, young Aussie bull rider Troy Jensen has been busted down to the pro-circuit. He needs wins and points to get him back into the big league and a shot at being crowned champ but an injury forces him off the circuit and into the arms of the woman fate keeps putting in his path.

The first time local Doc Joss Garrity meets Troy, she’s brandishing a lug wrench. The second time, he’s dragging her delinquent teen son home. The third time, he’s in her ER. How he ends up convalescing at her house she’s not quite sure. But it does make it hard to ignore him and their simmering attraction.

As Troy gets to know Joss, he starts to see a life after bull riding for the first time. But can Joss risk her heart on another man who may not come home one day?