REVIEW: ENGAGED FOR HER ENEMY'S HEIR by KATE HEWITT 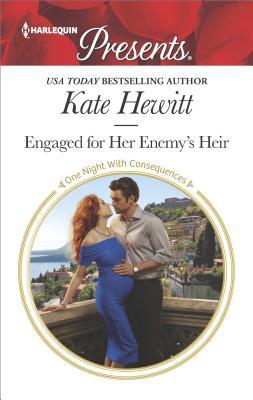 In Engaged for her Enemy's Heir by Kate Hewitt, Rafael Vitali is determined to get revenge on his family's enemy, but when he discovers that the woman he slept with is the man's daughter, Rafael is determined to do everything he can to forget her. However, when Allegra realizes she's pregnant and turns to him when she needs help, Rafael realizes the only thing to do is insist Allegra marry him and move to Sicily. Will Allegra be able to give Rafael another chance after how he treated her, or will she leave rather continue to go at things alone?

This story, which encompasses the revenge and opposites attract tropes was such a riveting read due to the tension between the main characters that creates wonderful chemistry; the emotion from the characters that made me sympathize with their back stories; and entertaining dialogue that had me enjoying the way the heroine stands up to the hero when it comes to the decisions they make when it comes to their baby and her life being turned upside down since no way will she put up with his domineering ways. The way this story started had me feeling sorry for the heroine, as she wasn't close to her father. Should she be at the man's funeral when he was never there for her growing up?

As for the dialogue, it was attention-grabbing and had me hooked due to the main characters back stories and the reason for Rafael wanting to take down the person that wrecked his family. Moreover, I felt sorry for the heroine when it came to how things went down with her father and how she lost him years ago. I could also understand why she was so determined to discover the truth about why her father did what he did to her and her mother once she learns more about the hero's past. Yet, what I liked most about the heroine is how resilient she was when it came to dealing with the hero and the moment when she learnt the truth of who falsely accused Rafael's father.

While the hero, he's arrogant, hard-working and a man determined to always get what he wants. He's come a long way since what happened to his father, but I found it was hard not to feel sorry about the fact that he's been unable to help his sister and how difficult his relationship with his sister is because of what she believes he did. Yet, what I liked most of all about the hero is how he let the heroine into his life and how she helped him to realize that what his father did wasn't his fault.

Overall, Ms. Hewitt has delivered a really good read in this book where the chemistry was strong; the romance was wonderfully crafted and shows how good these two are together; and the ending left me completely captivated because Rafael finally got the answers to get closure from his past and the heroine got the answers she needed when it came to her father and why he deserted her. However, it was the epilogue that wrapped this story up nicely, because of how far the hero and heroine have come in their relationship. I would recommend Engaged for her Enemy's Heir by Kate Hewitt, if you enjoy the enemy to lovers trope, the opposites attract trope, or books by authors Miranda Lee, Cathy Williams, Carole Mortimer and Michelle Smart.

BLURB
Surrendering to the Italian billionaire

When ruthless Rafael Vitali learns the woman in his bed is the daughter of his sworn enemy, he can't get her out of his penthouse quick enough. But when Allegra reveals she's pregnant, Rafael seizes the opportunity to assert his control. He insists Allegra move to Sicily...as his wife!

Allegra's night of abandon with Rafael shattered the life she once knew. His claim over her body, and their unborn child, is undeniable, but giving him a claim over her fragile heart is beyond foolish--yet the temptation he poses is wildly, wickedly irresistible...