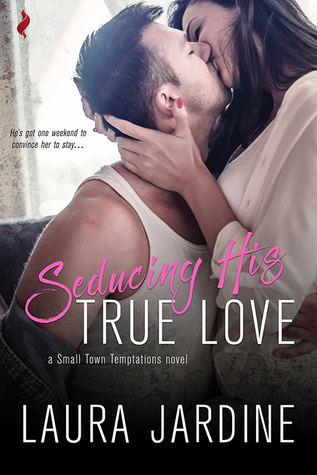 In Seducing his True Love (Small Town Temptations #2) by Laura Jardine, Cassie Monroe is doing her best to move on from the man she loved, even though they'd only spent a week together before he decided to cast their relationship aside. However, now Blaine Richards has returned to win her back since she's the one woman he's never been able to forget. Will Cassie allow him back into her life or will she decide that she's better off without him?

First things first, because this is really important for readers to be aware of and that is to read the disclaimer at the end of the blurb of this story, as the fantasies of the heroine could possibly trigger an intense emotional reaction for some readers that they might not be able to handle. However, in saying that, I did enjoy this story, despite the disclaimer. The way this story started had me amused by the heroine's choice of costume for Halloween, as it's not exactly a costume that would rouse interest from a guy. Will the man she's looking to get more friendly with be interested? Moreover, I did find that there could be plenty of jokes told due to her outfit, which there are further into this story.

As for the dialogue, it was intense due to the history between these two and their growing relationship in the present. Will Cassie give Blaine a second chance? Will Blaine be able to prove that he'll stay this time? It was also intense due to the heroine's fantasies and the scorching sex scenes that show off the hero's alpha-ness in the bedroom. Moreover, I liked that Cassie didn't make it easy for Blaine. He broke her heart the first time he ended things between them and she barely survived. How can she trust that he won't hurt her again? I also liked the close friendships the heroine had and how her friends helped her to decide what to do about Blaine. Will she listen to their advice or remain scared that he could hurt her again? Will Blaine find a way to prove to Cassie that he won't hurt her again and that she's the love of his life?

While the hero, he's confident and I liked how tenacious he was to win the heroine over. He knows how badly he hurt her and discovering what she went through after their split wasn't easy to hear. I also liked the way the hero used things from his job whenever he needed to distract himself and the close friendships the hero had with his friends that made it easy for him to talk to them about anything, especially Cassie. Will they be able to help him find a way to win Cassie over? Yet, what I enjoyed most of all about Blaine is that he did everything in his power to make Cassie happy and show her that he was committed to her.

Overall, Ms. Jardine has penned a very steamy and riveting read in this book, which entertained me from start to finish due to this couple's history that made me sympathize with the heroine; the way the hero was determined to win the heroine over and prove that he wasn't letting her go a second time; and the ending that had me loving the heroine's courage, because she realizes that Blaine is a man of his word, which is proven by what he was willing to do to show Cassie he wouldn't hurt her again. I would recommend Seducing his True Love by Laura Jardine, if you enjoy small town romances; stories with plenty of romance that pushes the boundaries of the couple when it comes to how much the heroine trusts the hero; or books by authors Carly Phillips, Ruth Cardello, Jaci Burton and Laurelin Paige.


Blaine Richards didn’t believe in love at first sight, even when he met the perfect woman. They had an intense, passionate interlude sixteen months ago…and then it was over. Even after all this time, Blaine can’t forget Cassie Monroe. Now, he’s desperate to get her back.

It’s taken more than a year for Cassie's broken heart to heal, but she’s finally ready to move on…when Blaine comes back to town, claiming she belongs with him.

He challenges her to spend a weekend with him, betting she won’t be able to walk away at the end of it. Cassie finally agrees, determined to prove there’s nothing between them but hot sex.