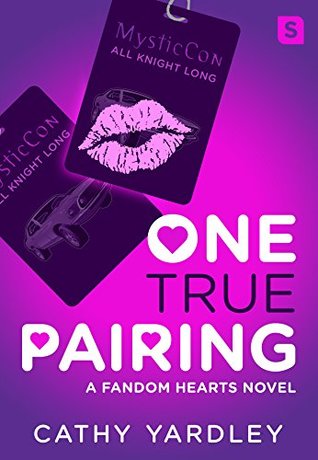 In One True Pairing (Fandom Hearts #2) by Cathy Yardley, Hailey Frost and Jake Reese find themselves helping each other with Jake needing to boost his star power to be able to secure his spot on the popular TV show, Mystics, and Hailey needing to help her sisters bring in customers to their bookstore. So, when they come up with a plan for Hailey to be Jake's girlfriend, everything seems to be headed in the right direction. But when things in their lives become complicated, will Jake and Hailey find the happiness they both deserve, or will the fact that they're from completely different worlds in him being a Hollywood actor and her being a hometown girl mean they end up going their separate ways?

From start to finish, this book was a quick read, because of the way it started with the trouble the hero is facing from his fans that are determined to get a little more frisky than what he'd like. How is he going to find a way out of the dilemma he's facing? However, there was so much more that made this story captivating too. Such as the fact that it encompasses the fake relationship trope two wonderful main characters that couldn't be more different.

As for the dialogue, it was fascinating and I loved the main characters back stories, as the heroine has been through so  much and she finds it hard to trust. Will Hailey be able to help Jake secure his spot on the popular TV show he plays a character on? Furthermore, the heroine is strong, brave and I liked how determined she was to help Jake. Her plans to help him are full of fun and I liked how she wasn't afraid to get up close and personal with the hero in public to boost his star power. I also liked how far the heroine was willing to go to help her sisters, because they've been through so much together and have helped each other through the tough times.

While the hero, he's confident, determined to help the heroine any way he can and I liked how protective he got of Hailey when things became a tad dangerous because of a stalker. I also liked his friendship with his co-stars, as their support means a lot, especially when things don't seem to be going his way when it comes to his career. However, I felt sorry for him when it came to his father as he feels the pressure of having a famous father. Yet, I liked that he fought for his career when it seemed his options were heading more towards him not getting what he wanted.

Overall, Ms. Yardley has penned a delightful read in this story where the chemistry between this couple had me hooked, the romance was loving and had me wanting to discover whether the heroine would realize that her time with Jake was more than sex, and the ending had me concerned for both of the main characters due to the hero's career and his stalker. Will things turn out the way the hero wants them to? I would recommend One True Pairing by Cathy Yardley, if you enjoy the fake relationship trope, the opposites attract trope or books by authors Laura Florand, Kit Rocha, Tif Marcelo and Lucy Parker.

BLURB
They couldn't be more opposite, the Hollywood actor and the hometown girl, but all they need is a little convention magic to become the perfect ship in Cathy Yardley's One True Pairing.

Jake Reese needs a decoy girlfriend. Fast. The lead actor of the popular TV show, Mystics, is tired of losing his shirt to overeager fans. Literally. Which is why a chance meeting with gothabilly bookworm-slash-barista Hailey Frost seems almost too perfect to be true. Hailey is not impressed with his TV fame and is desperate to save her family's bookstore. It's a match made in Hollywood, but as the two pretend to date, fan fiction becomes reality. Can this OTP become canon?