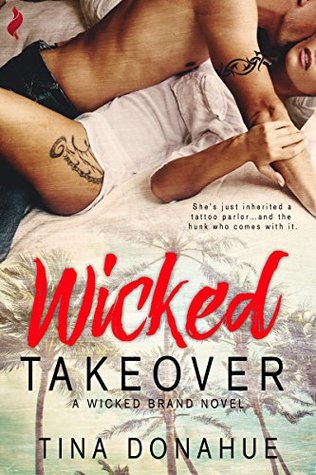 In Wicked Takeover (Wicked Brand #1) by Tina Donahue, Lauren has no choice but to accept the inheritance her father left her, especially since losing her job and needing an influx of cash to survive. However, she doesn't know the first thing about tattoo parlors or even how to run one, so she'll have to learn quickly. Yet, working alongside Dante, the sexy tattoo artist that runs it has her off-balance and her mind more focused on him than her dire financial situation. Will Dante be able to convince Lauren that money isn't everything and that forever after is the key to happiness?

This was a story that gave me mixed feelings  from start to finish. There were things that I loved such as the hero and his back story and the secondary characters in the people that work at the tattoo parlor that have a love for their jobs and a love for life. Then there were things that I was frustrated by such as the plot that I thought didn't have enough of a storyline to make me want to sit down and read this book in one sitting and the heroine's situation that made me believe the heroine wasn't doing enough to rectify the fact that she was jobless. The way this story started had me sympathizing with the heroine's situation, as she's running low on money and needs to find a way to change her luck. Will she find a job that will give her the chance to get back on her feet?

As for the main characters, I really liked the hero. He's confident, charming and I liked what he's done with his life because he'd burned out from being a successful lawyer and being a tattoo artist has given him the chance to see the good in people again and not make him feel like he's doing wrong by people. I also liked how the hero interacted sometimes teasingly with the heroine and was determined to show her that money wasn't everything. Didn't she realize that happiness was the key to life? While the heroine, she's been through a lot in her life and she finds it hard to accept her inheritance because of what her father did. Yet, I could understand why she felt the need to accept. It wasn't as if she had any other choice. However, I was frustrated by the fact that I felt the heroine wasn't doing enough to help herself with her job situation. Why couldn't she accept something any sort of job until something better came along in her field?

Overall, Ms. Donahue has penned a story that I did like where the chemistry between this couple was well-built and the romance spilled over onto the pages in steamy sex scenes. Yet, I just wished there had been a few more obstacles for this couple to overcome. The way this story ended was good, but I was hoping for more. Didn't the heroine deserve to be chased after? Wouldn't distance have been the perfect opportunity for the hero to realize that what he had with the heroine was worth fighting for? Moreover, I liked the decision the hero made when it came to his career, as second chances are worth pursuing. I would recommend Wicked Takeover by Tina Donahue, if you enjoy contemporary romance with plenty of spice or books by authors LA Casey, Lexi Blake, Lili Valente or Tessa Bailey.

BLURB
She’s just inherited a tattoo parlor…and the hunk who comes with it.

Lauren’s in a helluva mess. Not only has she lost her corporate HR job, she’s just inherited Wicked Brand, a struggling West Palm Beach tattoo parlor…along with the virile dude who runs it. Lauren’s full-figured, sorta pretty, and wanting him badly. Dream on. She’s here to sell the place as quickly as possible for some much-needed cash and score a new position in the corporate world.

Dante’s sinfully hot with a killer smile and beautifully inked biceps. He sees the heat in Lauren’s eyes despite her conservative appearance, recognizing the dynamite woman she could be if she’d just loosen up and have some wicked fun. Dominance and submission. Making love in a public place. Having her lush body always accessible to and ready for his.

Unwilling and unable to keep their hands to themselves, Lauren and Dante turn to carnal games and seduction. Until lust turns to surprising need and friendship to something deeper that might just change their futures.