REVIEW: AFTER YOU by ERIN NICHOLAS 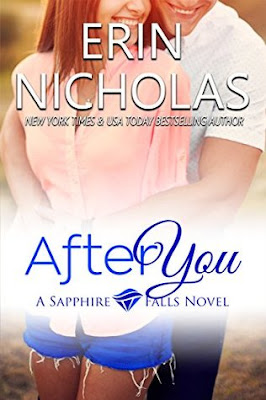 After You
A Sapphire Falls Novel
By Erin Nicholas
Releasing July 21st, 2017
Self-Published
+ Add to Goodreads

In After You by Erin Nicholas, Kyle Ames always believed he and Hannah McIntire would be together forever, but two years ago things changed and derailed the plans he had for his life. Yet, now she's back in Sapphire Falls to help her grandmother get back on her feet once she's had surgery, and Kyle doesn't know what to do. Will he help Hannah's grandmother in her plan to make sure Hannah stays in Sapphire Falls forever, or will their second chance at happy ever after never happen because he's a good guy that always does what he thinks is right for those he loves?
The Sapphire Falls series by Ms. Nicholas is one of her best; and a series that once you start reading you'll want to visit again and again, and this story was a wonderfully-crafted and captivating addition to this series. Not only because it's a second chance romance trope encompassing story, but because of the incredible main characters that try to fight their second chance, which proves impossible; secondary characters that are determined to play matchmaker because they want the heroine to return home; and the dialogue that had me amused due to Kyle always being a good guy that looks out for everyone and the heroine determined to make the hero be a little bit more spontaneous.
The way this story started had me amused by Hannah's grandmother and what she wants to do. Certainly, she's determined to play matchmaker and will do her best to convince others to help, especially Kyle. Will he fall into line with the older woman's plans? The incentive she offers is definitely a good deal, but I could understand why the hero decides on the plan of action he does. Getting his hopes up that Hannah will finally realize Sapphire Falls is where she should be is pointless, especially since her returning home hasn't happened so far.
The dialogue was well-written, very engaging and I loved whenever Kyle and Hannah conversed, or when one of the main characters interacted with one of the secondary characters. Both Kyle and Hannah have fantastic friends that aren't afraid to offer their advice; sound advice that both should definitely listen to, if they're to achieve their happy ever after. Hannah can't keep running just because of her past and the shame she feels due to what happened to her after her accident. Will she finally confess to Kyle why she feels she can't return to Sapphire Falls? Furthermore, the heroine is strong, brave and I liked how determined she was to help Kyle be more spontaneous. He needs fun in his life just as much as he needs to help people.
While Kyle, he needs his life shaken up and I liked how Hannah does just that. She's good for him in making him realize that he doesn't always have to be responsible, even though it's palpable he enjoys looking out for people. I also liked the bond the hero shared with the heroine's grandmother, which proves how good of a guy he is and that anyone woman would be lucky to have him. Yet, what I liked most of all about the hero is the decision he was willing to make to prove to Hannah that they deserve a second chance.
Overall, Ms. Nicholas has penned another spellbinding read for this series where the chemistry between this couple was off-the-charts, the romance was hot and illustrated how right these two are for each other, and the joyous ending had me loving Kyle more than I already did. His words to Hannah were beautiful, because he knows that he can't let her get away again. Two years apart is long enough. I would recommend After You by Erin Nicholas, if you enjoy second chance romances, the matchmaking trope, or books by authors Samantha Chase, Melanie Shawn, Jennifer Bernard and Jill Sanders.

BLURB
Only one thing has not gone according to Kyle Ames’s grand life plan.


She was his first love, the woman he planned to marry, the one that got away—all that romantic crap.

Two years ago, Hannah broke his heart. Which has been, well, not exactly fine, but he’s handling it because he doesn’t have to see her every day. In fact, Kyle had planned to keep up with the not-seeing-Hannah thing for at least a couple more years. Or a couple more decades. Or forever. But now she’s back in town to help her grandmother, Kyle’s patient and one of his favorite people, recover from hip surgery.

It’s only for six weeks. Surely Hannah can survive living in her hometown and helping her grandmother for six short weeks. If she doesn’t leave the house more than necessary. And puts on a show of being the same girl everyone remembers. And absolutely avoids Kyle Ames.

But that strategy evaporates the moment she sees Kyle again. And then things get worse—way worse. Kyle plans to also put on a show. To make Hannah’s grandmother happy, he’ll pretend he’s completely forgiven Hannah and wants her back. He doesn’t. But he and Hannah are the only ones who know that. And the pretend seduction quickly starts feeling far too real…and Hannah’s having a hard time remembering that she’s supposed to be resisting the whole thing.

And then there’s the not-so-tiny complication of falling in love with Kyle all over again. And the fact that he’s falling for her too. And that they’re both realizing maybe this time they’re doing it right.
BUY LINK:  Amazon
at 20:00