REVIEW: FIT FOR YOU by CYNTHIA TENNENT 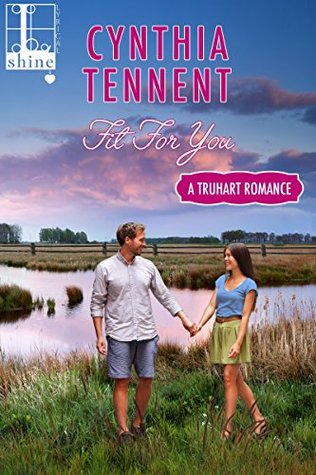 In Fit for You (Truhart #4) by Cynthia Tennent, Lily Shue has hit a rough streak with her career going from a fitness trainer on a reality TV show to taking a job in the small town of Truhart trying to help people lose weight. However, the task proves harder than she thought, especially with her being on crutches after injuring her knee. Even worse, the guy everyone loves around town isn't at all supportive of her quest, so how is she going to get the townspeople interested? Will he help Lily win the contest she's forced into to keep her job, or is their shot at happy ever after a lost cause?

Although I haven't read the other books of this series, I absolutely had a blast reading this story due to the wonderful main and secondary characters that entertained me with their teasing banter, intense moments and the obstacles the hero and heroine faced on their journey to happy ever after. Such as the hero, Edgar 'Edge' Callahan not being all for helping her when it came to getting the townspeople healthier and fitter; whether Lily can find a way to impress the people who gave her the opportunity she's been given; and whether Edge can find a way to win Lily's heart.

The way this story started had me amused by the heroine's reaction to the hero the moment she meets him, because he's nothing like she was expecting. Her words to him made me laugh, as she's judging him harshly based on his appearance and mode of transportation. Will she realize how wrong her judgment is the more time she spends with him? Moreover, Lily is resilient, courageous and I liked how determined she was to prove that what happened in her past doesn't rule her from being capable of helping the people of Truhart overcome their troubles when it comes to a health problem that affects a lot of people. I also liked how she handled everything thrown her way by people that believed she didn't have it in her to be able to help the people of Truhart, and I could understand why she reacts the way she does. Would she give up and leave Truhart? Would she fight to prove people wrong that she can do what she came to Truhart to do?

While the hero, I felt sorry for him, because of what happened in his past and I could understand why he doesn't like to talk about it, because it's palpable it makes him feel like a failure. I also liked the challenge the heroine provided for Edge, because he needed the wake up call she gives him; the one that says 'stop letting the past rule you'. Even though it was mighty difficult for him, because he could have achieved so much if what happened to him hadn't have happened. Moreover, the hero could be quite intense at times when it came to something he was passionate about, especially in the moments where he was trying to help the heroine. Could the heroine handle his intensity, his obsession to help her?

Overall, Ms. Tennent has penned a fascinating read in this book where the chemistry was strong due to this pair being at odds throughout this story, the romance was wonderful with the hero taking absolute care of the heroine and the ending had me sympathizing with what happens to the heroine, but had me overjoyed because of how things turned out for this couple. Certainly, Edge knows how to make Lily feel better with his declaration. I would recommend Fit for You by Cynthia Tennent, if you enjoy small town romances or books by authors Jen Gilroy, Cindy Kirk, Donna Kauffman and Kate Hewitt.

In the split-second it takes to injure her knee, Lily Shue’s life goes from rising star to small town reject. Forced to give up her role as a trainer on a hit reality fitness show, she takes a job in tiny Truhart, Michigan. By the time Lily arrives in the one horse town—on her crutches—she is well and truly fed up. And then a maniac nearly hits her with his garbage truck . . .

Edgar “Edge” Callaghan knows a little bit about broken bones—and broken dreams. A former skier and Olympic hopeful, Edge’s athletic career ended in injury, and took his love life with it, leaving him to bum around Truhart doing the occasional odd job, including driving his uncle’s teddy bear covered garbage truck. But something about the feisty new brunette in town tempts him to lace up his sneakers again. Even if it’s just to prove her wrong about him. And maybe to prove something to himself.

Lily and Edge may have started off on the wrong foot, but before long they realize they’re both moving in the same direction . . . toward each other.