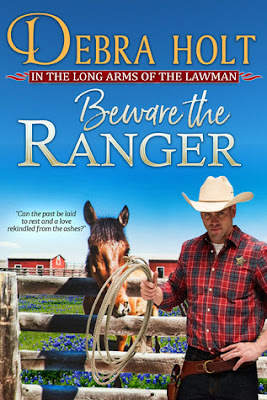 Beware the Ranger
In the Long Arms of the Lawman #1
By: Debra Holt
Releasing June 28th, 2017
Tule Publishing
+ Add to Goodreads

In Beware the Ranger (In the Long Arms of the Lawman #1) by Debra Holt, twelve years ago Kaitlyn Russell and Clay Morgan were young, in love and had their future all planned out until her grandmother interfered. Now Kaitlyn is back in Texas because her grandmother is determined to make things right for the pair. Will Kaitlyn be able to forgive Clay for making her follow her dreams of Broadway stardom, so they can have another shot at happy ever after; or will she return to her life and continue to fly solo?

This is the first book I've read by Ms. Holt, and the moment I finished this book, I definitely wished I could read the next story in the series right away due to the secondary characters in Clay and Kaitlyn's good friends -- Angie and Jace. The way this story started drew me into this story immediately, because Kaitlyn's grandma is determined to make things right for her granddaughter after robbing her of her happiness years ago because she believed what she did was right. However, it was from the moment the hero and heroine come face-to-face for the first time in years where this story had me hooked and determined to discover what this couple would go through on their journey to happy ever after. Will Clay be able to earn Kaitlyn's forgiveness?

The dialogue was intense and so enjoyable that I could not put this book down, especially from the moment these two came face-to-face and how Clay pushes Kaitlyn to do the right thing for her grandma when it comes to staying. Then there's the friendship between Kaitlyn and her friend, Angie, who wants the heroine to find happiness; the kind of happiness only Clay can bring her. Certainly, the secondary characters charmed me with their matchmaking, their desire to have Kaitlyn stay and I liked how they helped Clay when it seemed all hope was lost. That the love of his life would leave again.

Both the main characters were captivating, and I loved the will-Kaitlyn-forgive-Clay-or-will-she-not emotional roller-coaster this story took me on due to what she believes he did. Moreover, the heroine is strong and brave by finally confronting the past, even though discovering what she believed about Clay wasn't easy to accept, especially when she was so wrong. I also liked how kind and caring she was towards Clay's son who she had an incredible bond with, because the boy wanted someone for he and his dad to share their life with. Yet, what I liked most of all about the heroine was how feisty she was towards Clay in the beginning, because she was still so hurt after what happened between them years ago.

While Clay, he's worked hard to get to where he is and is good at his job as a Texas Ranger. He's also honorable in what he did for the wife of a friend, because of the guilt he felt over what happened to his friend. Then there's the way he's up to the challenge Kaitlyn presents for him, because he wants a second chance. Will he win her forgiveness? Yet, what I liked most about the hero is how good of a dad he is towards his son and that he would do anything to protect the boy. What happens if his son gets too attached to Kaitlyn?

Overall, Ms. Holt has penned a brilliant read in this book where the chemistry was intense, the romance on the sweet side and the ending wrapped this story up perfectly, because Clay will do anything to have a second chance with Kaitlyn. Furthermore, I loved the words he says to her to get her to see that he never stopped loving her, especially when he talks about the past and what he did to make certain that the sacrifice he made was a good decision. However, it was the epilogue that left me with a smile, as Kaitlyn isn't afraid to do a little of her own matchmaking since everything worked out so well for her and Clay. I would recommend Beware the Ranger by Debra Holt, if you enjoy second chance romances or books by authors Jane Porter, Jeannie Moon or Sarah Mayberry.

BLURB
Twelve years ago, Kaitlyn Russell had a dream: living happily ever after with Clay Morgan. Except her grandmother had bigger plans for her beloved granddaughter and they didn't include life in the small town of McKenna Springs as the wife of a young, poor deputy. Kaitlyn's heart was broken when Clay and her grandmother convinced her to pursue her second love, Broadway stardom.

Texas Ranger Clay Morgan is a widower with a young son to raise. A dozen years before, he had to make the most difficult decision of his life when he agreed to let go of the only woman he'd ever loved so that she could pursue her dreams.

Now, fate and an old woman’s guilty conscience conspire to bring Clay and Kaitlyn back together once more. Will they be able to lay the past to rest and rekindle their love from the ashes?