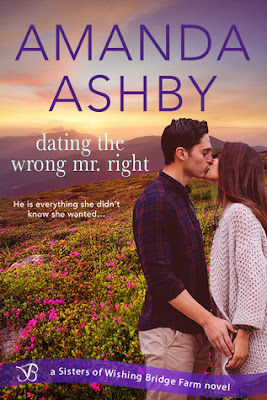 In Dating the Wrong Mr. Right (Sisters of Wishing Bridge Farm #3) by Amanda Ashby, Pepper Watson doesn't know what to do now that she's lost her job and is finding it hard to find another because of her ex-fiancé. So, returning home to help her sisters is her next best option until she can figure out her next step. Spending a considerable amount of time at Wishing Bridge was never in her carefully planned future, but the more time she spends with Ben Cooper, the more she finds herself wanting to stay. Will Pepper be able to convince Ben that what they have between them means more to her than her plans for the future?

This series has really surprised me, and it's one I've loved from the very first story. The Watson sisters are three very different women -- the youngest Becky is a free-spirit, Emmy the middle sister is a woman that loves small town life, and Pepper the oldest is a total control freak. They've reunited after the death of their aunt and need to make some major decisions; decisions that aren't easy when they're at odds with each other, but I've enjoyed how each woman has found love and happiness. The way this story started had me wanting to laugh at Pepper's reaction to Ben. He's her youngest sister's best friend and a man that always seems to be around, but Pepper finds he always brings out the worst in her.

Both the main characters were very engaging, and had me hooked because of their heartbreaking back stories that help them to bond due to Pepper's friendship with his late twin; they're total opposites and frenemies; and Pepper needs him to help her get her ex to leave her alone. Moreover, I loved how the hero would do anything for family, especially when his parents are still struggling financially after they lost his brother. I also liked how persistent the hero was in trying to win the heroine over, although Pepper could be quite stubborn, so he did have quite a challenge on his hands.

While the heroine, her need for control is understandable, because she didn't have a lot when she was younger and lost those she loved. I also liked how she didn't give up on trying to get her career back on track, even though every avenue she explored seemed hopeless, considering what her ex did to her. However, what I liked most about the heroine is how she finally began to let her sisters in, instead of continuing to shut them out of her life. She needed them, especially when it came to making things right with the hero and realizing what she wanted for her future.

Overall, Ms. Ashby has penned a wonderful read in this book where the chemistry was delightful, the romance on the sweet side and the secondary characters definitely bring a little extra something special to this story with their teasing and advice. The way this story ended was absolutely captivating, because of the decision Pepper made. She'd be good at her job no matter where she worked, because she excels at helping people whether their problems are big or small. However, it was the epilogue that wrapped things up superbly, as Pepper shows Ben that she's strong and brave and doesn't need saving anymore if she wants to do something reckless. Yet, it was the surprise Ben had for the heroine that I loved the most about the epilogue. Certainly, she deserved happy ever after just like her sisters had found. I would recommend Dating the Wrong Mr. Right by Amanda Ashby, if you enjoy the opposites attract trope, the fake relationship trope, the enemy to lovers trope or books by authors Victoria James, Jennifer Shirk, Coleen Kwan or Jody Holford.

BLURB
Pepper Watson has lost everything–her job, her fiancé, and the future she’d so carefully planned. Now she’s back at Wishing Bridge trying to figure out her next step. Her new plan does not include the ever-so-sexy Ben Cooper. Nope. She’s getting her life back on track, and getting out of this little town as fast as possible.

Ben Cooper is doing his best to build his business and help his parents. The last thing he needs is the distraction that is Pepper Watson. She might be prickly every time he’s in her presence, but he sees another side of her. The side that has set aside her dreams to help her sisters. And then there’s the fact that kissing her is pretty much the best thing that’s ever happened to him.

He’s putting down roots. She’s running away. It’s going to take more than a wish for these two to find their happily ever after.
BUY LINK:  Amazon
at 23:31