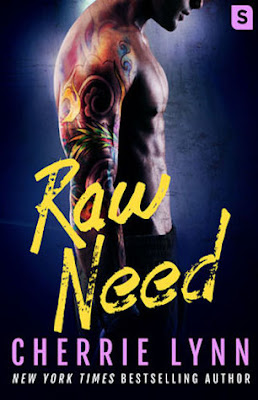 In Raw Need (Larson Brothers #2) by Cherrie Lynn, Rowan Dugas has been struggling since the death of her husband and then soon after finding out she was pregnant with his baby. But somehow meeting her favorite singer Zane Larson has begun to help her heal a little, especially when she listens to his music. When he asks her to go on tour with him, she's reluctant at first, but with the problems she's having with her in-laws, she knows it's the only way to escape her troubles. However, both know that their relationship can't last when she's still grieving her husband. Will Zane be able to find a way to convince Rowan to give him a chance at happy ever after, or will the trouble her in-laws are determined to cause enough to send her running from the one man that has managed to make her happy again?

Ms. Lynn is an author whose books I've been reading since she released her very first story, and she's an author that I've come to be completely riveted by her style of writing. Because her characters have such emotionally-intense back stories, are thoroughly entertaining and her dialogue is always engaging, especially when her characters have already lost so much like Rowan and could lose more if they don't make the right decisions. The way this story started had me smiling and hoping everything goes right for Rowan. Everything from finding the right outfit to having a wonderful night out, as she needs a little fun in her life after her lose. Will everything go right for her?

With the dialogue, it was intense due to the main characters back stories and everything the heroine goes through with a singer who doesn't think she fits into Zane's life and the way her in-laws treat her, especially her mother-in-law; a woman that's determined to keep Rowan in line with their expectations for her life. Moreover, I liked how strong and brave the heroine was in standing up for herself, and not giving in to her mother-in-law's undignified behavior. I also liked how determined she was to take control of her life and do something that made her feel alive again, instead of continuing to wallow in her grief. But what I liked most of all is that she gave Zane a chance, as he's definitely good for her when everything else in her life feels like it's falling apart.

While Zane, he's done well for himself and has overcome so much in his past. Music and the tight bond he has with his brothers are the only two things that saved him from his rough childhood and I liked the way he made the heroine feel better with his music and the songs he told her about. I also liked how he won the heroine over by not pressuring her like everyone else in her life seemed to be doing, even though he wanted her badly and their chemistry was fierce.

Overall, Ms. Lynn has penned a really good read in this book where the romance was explosive and the secondary characters have me looking forward to the next book, especially since the hero will be Damien, the Larson brother wrapped up in so much mystery that makes this reader wants to know more about him. The way this story ended had me concerned for the heroine because of what she goes through. Yet, how things turned out for her and Zane was heartwarming, as some of the secondary characters finally did what was right for Rowan. Certainly, she deserved a second chance at love. However, it was the epilogue that wrapped this story up wonderfully with Zane's surprise for the heroine. I would recommend Raw Need by Cherrie Lynn, if you enjoy second chance romances or books by authors Rachel Van Dyken, Michelle A. Valentine, Kylie Scott or Jamie Shaw.

BLURB
Zane Larson has done everything he set out to do: conquered past demons, saved lives through his music, and toured the world as the frontman for one of the most popular rock bands in the world. This life—and an escape through music—was supposed to be everything he’s ever wanted, but after meeting Rowan, Zane’s no longer sure…

Soon after her husband’s death, Rowan Dugas learned she was pregnant. With grief and uncertainty her only companions, Rowan was only able to find an escape through music; specifically Zane Larson’s hypnotic voice. But after meeting the sexy lead singer of her favorite band, Rowan can hardly believe he’s interested in her. But Zane also has a painful connection to her unborn child - Zane's brother is responsible for her husband's death.

Torn between the only family she has left, and a life with Zane unlike anything she’s dared to dream about, Rowan’s decision will change her fate forever. This new title from New York Times bestselling author Cherrie Lynn is a heart wrenching, emotionally intense story that will leave readers breathless.
BUY LINK:  Amazon
at 20:32