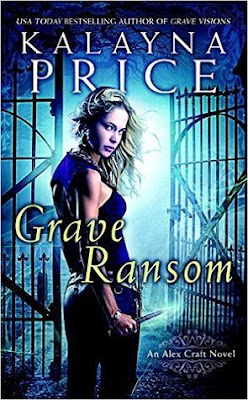 In Grave Ransom (Alex Craft #5) by Kalayna Price, being a grave witch, Alex Craft is used to dealing with the dead. But she finds herself in for another tough case when the dead start walking and committing crimes all over Nekros City. Normally, she likes to fly solo and investigate to her heart's content, but this time everyone is looking out for her, especially when she becomes a target by the bad guy. The question is - can Alex find the culprit before she becomes one of his victims?

I have loved this series right from the very first book, because Alex is such a fascinating heroine and her ability to see the dead, be able to raise their shades as a grave witch and be able to see the soul collectors; collectors that she has interesting names for, such as the gorgeous Death who she's always had an extraordinary friendship with makes this series an absolute pleasure to read. As to do the cases she investigates alongside the local police department and for her business that take readers on a wild ride of deadly situations that make readers unsure whether Alex will win against her opponents and daring rescues that bring back old friends.

The way this story started sets the fast-pace of this story and had me completely enthralled, as there are pros and cons to being a grave witch for Alex such as seeing things other people can't. Will she be able to stop what only she can see? Certainly, I could empathize with her, because she's gone through so much in the previous books and goes through a lot more in this one with loyalties being tested and her becoming a target of the bad guy, but I liked how she handles everything thrown at her with fortitude and valor; a woman determined to make the wrongs of the paranormal world right for everyone else and give loved ones peace when they lose someone important.

As for the dialogue, it was intense due to the investigation, but I liked that Alex could still manage to see the good in people and be able to joke with those she's close with, even when she's been used over and over again by those that have an agenda. People such as Briar, an agent with the Magical Crimes Investigation Bureau; and Falin, a Fae assassin that has no choice but to obey the orders handed to him by the Winter Queen. Will Falin ever be able to win back Alex's trust? Moreover, the heroine is strong and brave and I liked how determined she was to see through the case she's working until the very end and doesn't give up until the case is solved, no matter how dangerous things become.

Overall, Ms. Price has penned another incredible read for this series where Alex has strong chemistry with both Falin and Death, which made this reader choose a side of who she hoped would win Alex's heart from book one. Furthermore, the ending had me on the edge-of-my-seat with what happens between Alex and the bad guy, but what happened right at the end left me a tad saddened because it seems the tight bond Alex and Death have has been broken. I would recommend Grave Ransom by Kalayna Price, if you enjoy paranormal romance, urban fantasy or books by authors Ilona Andrews, Karen Chance, Faith Hunter or Keri Arthur.

BLURB
In the thrilling fifth book in the USA Today bestselling Alex Craft series, Alex comes face to face with the walking dead.

Grave witch Alex Craft is no stranger to the dead talking. She raises shades, works with ghosts, and is dating Death himself. But the dead walking? That’s not supposed to happen. And yet, reanimated corpses are committing crimes across Nekros City.

Alex’s investigation leads her deep into a web of sinister magic. When Briar Darque of the Magical Crimes Investigation Bureau gets involved, Alex finds herself with an unexpected ally of sorts. But as the dead continue to rise and wreak havoc on the living, can Alex get to the soul of the matter in time?
BUY LINK:  Amazon
at 23:19