REVIEW: I NEED YOU TONIGHT by STINA LINDENBLATT 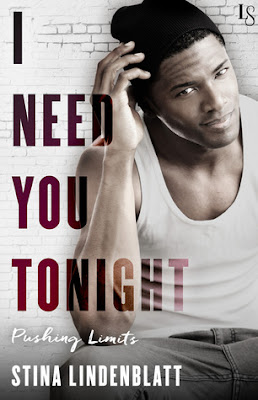 In I Need You Tonight (Pushing Limits #3) by Stina Lindenblatt, Nicole McCormick and her brother Zack are very close, so he always worries about her when he's sent on a mission with the Navy. When Zack asks his best friend, Mason Dell, to check on Nicole while he's away, neither imagined they'd fall in love, especially when Nicole should be off-limits. Will Mason be able to prove to Nicole that he's the right man for her, or will his troubled past rear its ugly head to keep them from getting the happy ever after they both deserve?

This series is one I've loved from the very first book and one I'm sad to see end, because the men of Pushing Limits are alluring and are heroes that always go after what they want, which makes their happy ever after all the more satisfying to read. Because they don't give up on getting the girl, even when there are setbacks that don't make it easy to win back the heroine's love, which is certainly true in this book. The way this story started had me amused by the hero's reaction to weddings and the fact that his chance of getting lucky is limited, especially when he's the biggest playboy ever and loves any chance he gets in getting a willing woman into his bed for a night of pleasure. Will he find a woman that wants to spend the night with him?

As for the dialogue, it entertained me from start to finish due to the main characters back stories, especially that of the hero; the way these two tease each other as they get to know each other again; and their growing relationship, which illustrates how lucky these two are to find happiness together, considering all that they go through including the moment that leads back to Mason's past and the trouble he had that left him on the outs with his family with -- it seems -- no chance of forgiveness. Will Nicole be able to help Mason repair the damage between he and his family?

Both the main characters were fantastic, and I really enjoyed their growing relationship, as the hero and heroine help each other to heal from their pasts. Nicole is strong and brave and I liked how she accepted her best friend's advice and how she grew close to the secondary characters in the women the other men of the band are in a relationship with. I also liked how Mason is around her, because in the other books, it's palpable how much he loves women and that one-night stands are all he's interested in. Yet, Nicole becomes more than enough for him and I loved how he proved he was the right man for her with the decisions he makes.

While the hero, he has some big decisions to make throughout this story when it comes to confronting his past, making things right with Nicole and needing to overcome the problem he had that led to his falling out with his family. I felt sorry for him when it came to his family and I could understand why he had a setback. Because even though what he did in the past was so wrong, how could his family continue not to forgive him? Yet, what I liked most about the hero was the decisions he did make and that they were the right ones for him when it came to finally overcoming his past and winning Nicole's love forever.

Overall, Ms. Lindenblatt has penned another remarkable read for this series, which ended the series perfectly because of the epilogue; and where the chemistry was strong, the romance full of exquisite heat and passion, and the ending brought happy tears to my eyes as Mason deserves all the happiness he's found at the end after all that he's been through in his life. I would highly recommend I Need You Tonight by Stina Lindenblatt if you enjoy the brother's best friend trope or books by authors Athena Wright, AL Jackson, Anne Mercier or Eden Summers. I would also recommend the other books of this series because they are wonderful reads with delightful happy ever afters.

BLURB
Old habits die hard. But in this sexy, heartwarming romance, a musician who’s addicted to the temptations of the road falls for a good girl who makes him want to clean up his act.

Mason Dell’s band, Pushing Limits, is a sensation, and he’s having a blast on their biggest tour yet. Then he gets a call from his best friend, who’s in the Navy, asking him to find out why his sister isn’t answering her phone. The dude once saved Mason’s life from a suicide attempt related to a gambling problem—so the two-and-a-half hour drive from L.A. to her small town is nothing.

What he finds is a sweet, successful boutique owner who’s too busy to notice when her phone dies. Nicole McCormick has nothing better to do than work. She’s bored of all the men she’s been dating: stable, career-oriented guys who are nothing like her destructive father. Mason’s is a breath of fresh bad-boy air. Their sexual connection is explosive, and with her shop undergoing renovations, Nicole even joins Pushing Limits on the road. But when Mason falls off the wagon, that’s one path she swore she’d never go down again.

While Nicole picks up her broken heart and heads home, Mason misses her like crazy. Although he wants to forge a future with her, he just doesn’t know how to leave the past behind. But for love, it’s time to learn.
BUY LINK:  Amazon

Don’t miss any of Stina Lindenblatt’s emotional Pushing Limits novels:
THIS ONE MOMENT | MY SONG FOR YOU
at 13:15