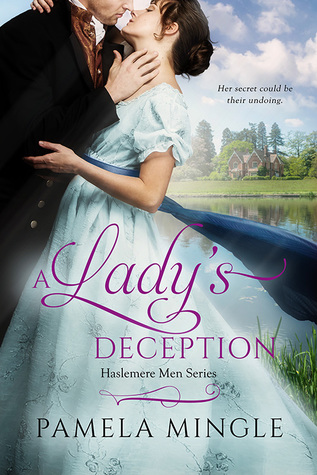 In A Lady's Deception (Haslemere Men #2) by Pamela Mingle, Eleanor Broxton and Hugh Grey had very strong feelings for each other and spent an incredible night together before he headed off for war in Canada. Now two years later, Hugh is back with plenty of money; knighted and finding people calling him 'Sir'. Yet, there's one thing he wants more than anything, and that's to have Eleanor back in his life and by his side. Will Hugh be able to win Eleanor back, or will the secret she's been keeping turn them against each other when Hugh learns the truth?

Although I haven't read the first book of this series, I found this story could easily be read as a stand-alone, and it's a story that was totally riveting due to the main characters back stories, the secret the heroine is hiding from the hero, the tension between the main characters and the secondary ones that had me wanting to discover more about why Hugh is at odds with his family and why the heroine is having so much trouble dealing with someone determined to keep her apart from someone she loves. Will Hugh's family be able to find a way to repair things with the hero? Will the heroine find a way to protect someone she loves?

As for the dialogue, it had me hooked due to the main characters back stories and the history between them that has the heroine desperate to keep her secret hidden from the hero. Will she be able to keep her secret under wraps or will Hugh discover the truth? Moreover, the dialogue was also intense due to the main characters back stories, as the heroine hasn't always had the best relationship with her parents, but it seems her dad is determined to do better, which is proven by everything he does for her. However, in saying that, with a mother like hers who needs enemies?

Both the main characters were intriguing and I really enjoyed their interactions, as the hero is determined to win Eleanor over, no matter how many times she snubs him or does her best to stay away from him. I also liked how kind and considerate he was and that he was determined to help her in any way he could, especially when it came to her career as a designer and anyone that dares to make her feel like she's less than the good woman she is. While the heroine, she's been through so much and I couldn't help but feel sorry for her when it came to dealing with her mother; a mother that should support her daughter and not make her feel like she should be punished for what the woman sees as Eleanor's mistake that could lead to a scandal. Really, is mixing with their social circle more important than her daughter? Yet, I liked that the heroine was strong, brave and finally stood up to those that were determined to make her feel like her life wasn't good enough because of what they believe was ruin to her name. However, in saying that, I did find her need to run to her dad to fix things was a bit hard to handle, especially when Hugh was so willing to help her if she just let him in. Will the truth come out before Eleanor can reveal to the hero what she's hiding?

Overall, Ms. Mingle has delivered a story with plenty of chemistry between the main characters that kept me wondering if they'd ever find their way back to each other, considering the tough obstacles they faced; and plenty of emotion that had me sympathizing with both the hero and heroine. The way this story ended had me loving the hero more than I already did, as he's driven and so determined to win back the heroine after everything he puts her through. Can she forgive him? Furthermore, I liked how the hero made things right with the secondary characters in his family that deserve his forgiveness and the chance for them to be the family they never got to be because of what happened between his mother and father that turned his father into a man unwilling to compromise. I would recommend A Lady's Deception by Pamela Mingle, if you enjoy Historical Romance, second chance romances, or books by authors Tina Gabrielle, Callie Hutton, Stacy Reid and Christi Caldwell.

BLURB
Mr. Hugh Grey and Miss Eleanor Broxton share a scintillating liaison the night before he leaves for war in Canada. The memory sustained him for the years he was away. Now, the reputed rake is back, knighted, and he’s got enough money to right the estate his father left in ruins. What would make Sir Hugh Grey’s world perfect is the lovely Eleanor by his side.

Their attraction is sizzling, and the sweet way Hugh is wooing her—a kitten, kisses in the moonlight, and expert help in lighting her dreary work space—makes Eleanor dream of forever with her strapping knight. But she will not risk a scandal, which could ruin his newfound respectability and esteem, especially in her father’s eyes. When Hugh discovers what she’s been hiding, it could drive them apart forever.