BLOG TOUR - REVIEW: BACK IN THE RANCHER'S ARMS by ELSIE DAVIS 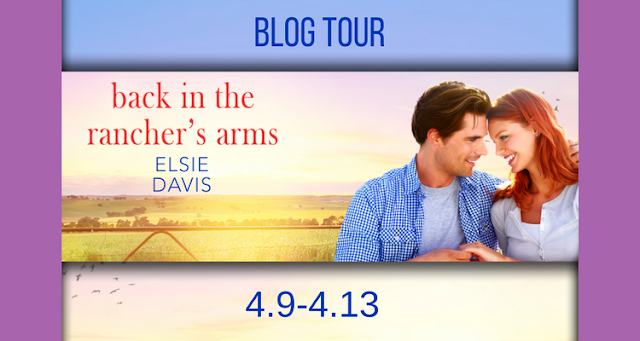 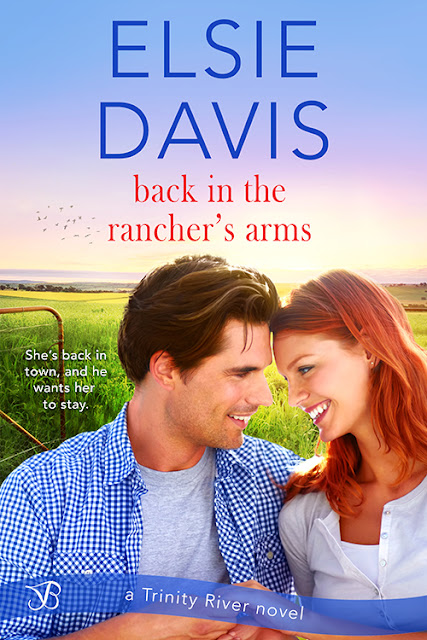 Dylan Hunter has always loved the girl next door. Part of loving her meant making sure she left their small town to study to become a veterinarian. He just never expected it to take this long for her to come home. His hands are full raising his younger brother and bringing his ranch through the drought, but one look at Kayla and his feelings are back full force.
Kayla Anderson’s not prepared to see the guy who broke her heart in high school again, but she can’t get out of returning home to be maid of honor at her cousin’s wedding. She’s determined to have fun and celebrate the special day, despite the fact Dylan is her family’s closest neighbor and the best man, and get the heck back out of Dodge.But Dylan already lost the woman he loved once. This time, he’s determined to win her back...

In Back in the Rancher's Arms (Trinity River #1) by Elsie Davis, all Kayla Anderson plans to do when she comes home is to attend her cousin's wedding and be the best maid of honor she can be. However, being back home isn't easy, especially when she can't seem to avoid Dylan Hunter -- the man that broke her heart. Will Dylan be able to convince Kayla to give him another chance or can Kayla no longer trust Dylan enough to give him her heart again?

Ms. Davis has delivered an enchanting, fast-paced, sweet read in this first book of her Trinity River series where the main characters entertained me from start to finish due to their past history and how determined the hero was to win back the heroine; and the dialogue was compelling and had me sympathizing with the heroine because she lost more than Dylan when they broke up. Will Dylan be able to win the heroine back? However, it was from the moment the hero and heroine came face-to-face for the first time that had me totally hooked, as Kayla is determined to avoid Dylan if possible, but it seems that isn't possible.

Both the main characters were fantastic and I loved the obstacles they overcome to achieve their second chance at happy ever after including the hero finally discovering the truth of why Kayla won't forgive him for the past and whether the heroine will decide to stay. Furthermore, the heroine was strong, brave and I liked that she wasn't afraid to go head-to-head with the hero in order to get her way, especially when it came to the things she does to help the hero's brother. I also liked how kind and caring she is and that she would do anything for her family, despite the fact that it feels she's missed so much since she doesn't come home as much as her family would like. While the hero, he's confident, a good brother and I liked how determined he was to win the heroine back, even though it's palpable that isn't going to be easy. I also liked what he was willing to do to help the heroine's family, even though keeping what he's done a secret could backfire. How will the heroine react if she discovers the truth?

Overall, Ms. Davis has delivered a captivating read in this debut novel where the chemistry between Kayla and Dylan is strong and only gets stronger; the romance was on the sweet side; and the ending had me so happy because of the decisions the heroine makes in order for the pair to be together forever. However, it was the epilogue that wrapped this story up brilliantly because Kayla and Dylan deserve every bit of happiness they've found and I liked that the hero's brother is flourishing because Kayla is a good influence and they have a special bond, which is proven by how close they've become. I would recommend Back in the Rancher's Arms by Elsie Davis, if you enjoy second chance romances or books by authors Jennifer Hoopes, Sonya Weiss, Jennifer Shirk and Victoria James.

“And now if we could get the maid of honor, the best man, and the rest of the wedding party to join the bride and groom on the dance floor, we’ll kick off this shindig.”

Dylan crossed the room to her side. “May I have this dance?” He held out his arm.

“Yes.” She laid her hand gently across his forearm.

Dylan led her to the far side of the dance floor. “I’m sorry about earlier.” He pulled her tightly against his chest, one arm looped around her back, the other holding her hand out to lead her in a waltz.

“I don’t want to discuss it,” she said, trying to hold her body stiff against his.

“Darling, we’ve done enough of that for five years. Don’t you think it’s time for a change? Besides, I don’t think you’re as immune to me as you claim to be.”

Weddings were hell on a person’s emotions, and being in Dylan’s arms made it worse, but him calling her darling, well, that was over the top. His hand dropped to her waist, the contact burning through the thin layers of material that separated his hand from her skin.

“I don’t know. Things are good the way they are. Why change it now?”

Kayla scanned the room as Dylan spun her around the dance floor. Anything other than looking up at Dylan and getting lost in the temptation his chocolate eyes offered.

“Are you happy in the city?” His question caught her off-guard.

“Wow. Where did that come from?” She tried to dodge the bullet.

“Answer the question. Are you happy?” he persisted.

How could she answer if she didn’t know herself? Before she’d come to visit, the answer would have been easy. Time and being back home had changed her perspective about a lot of things. A lot of things except Dylan. He’d gotten older and possibly more charming, but nothing could change the past.

“Yes.” It was the safest answer.

The city offered her the fun and excitement she’d originally longed for, but once the newness had worn off, she’d realized a lot of the people there were going through the motions of living, hopping from one party to the next, one event to the next, one dinner out to the next. There was always something going on, and people never stopped to get off the carousel and look around. To breathe.

She’d already considered moving home, but there was simply too much history in Riverbend, which is why she’d accepted the partnership offer.

“Have you ever thought of coming home?” he asked. It was like he could read her mind.

“Houston is my home now. I like it there.”

He pulled her in closer. “And I like you here.”

His words caused her to stumble. Here in Riverbend or here in his arms? Either way, his statement confused her.

She ignored his last words. “Why do you think Sophia and Ethan did this to us?” she asked bluntly. It wasn’t a big secret she didn’t want anything to do with Dylan.

“What makes you think it was planned?” he asked.

“They both know how things stand between us.”

“Maybe they’re trying to rewrite the ending.” He pulled back to smile down at her.

“Is it?” He pulled her back in close, keeping her emotionally off-balance.

At the age of twelve Elsie Davis discovered Barbara Cartland, the Queen of Romance, and has been hooked ever since. While three daughters, four grandchildren and her own hero husband keep her busy, she still manages to write full-time from her mountain-top log home.

Indoors, she enjoys a warm fire, a glass of red wine, a romantic comedy movie or a great romance, as long as they are a guaranteed Happily Ever After.

She is an award-winning author and an active member of RWA and KOD.