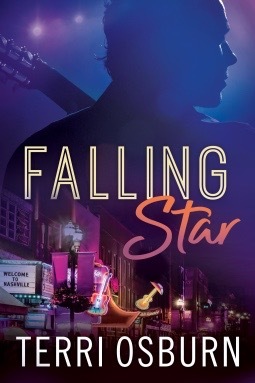 A country star looking for a comeback has one last shot at fame—and he might just have one last shot at love.Naomi Mallard is a fixer by nature. And as PR manager for Nashville’s Shooting Stars record label, she’s facing her biggest fix: redeeming country music bad boy Chance Colburn. But in Naomi’s eyes, a police record and a stint in rehab are the least of Chance’s sins. He has spent his life running from demons and making tabloid headlines that have sent his career into a tailspin. Now he’s struggling to find his muse and maintain his newfound sobriety, all while counting on the woman he once betrayed to repair his tattered reputation.Naomi is determined to keep their relationship strictly professional, but that’s not easy when an unexpected injury forces the former couple into disturbingly close proximity. Will mending their once-broken relationship be Naomi’s best save yet? Or will Chance’s past wreck any hope for a future together?

In Falling Star (Shooting Stars #2) by Terri Osburn, as a PR manager for Shooting Stars, Naomi is good at fixing problems, but she faces her biggest challenge yet when she takes on country music bad boy Chance Colburn. Even worse, it's not easy for Naomi to be around Chance since they were once involved until he broke her heart. Luckily though, Naomi is a professional and willing to do everything she can to keep him out of trouble. However, when something happens that will bring these two closer together, will Chance be able to win Naomi back or will they lose their second chance at happy ever after?

What an absolutely entertaining, fast-paced, wonderful read Ms. Osburn has penned in this second book of her Shooting Stars series where the hero has been through tough times, but is now starting to get his life back on track; the heroine is determined to keep things professional while doing her best to help the hero stay on track and get back to what he does best -- write and perform music; and the obstacles this couple face are tough, but had me loving the hero's determination to fight his addiction and the heroine's willingness to help the hero despite the fact that he broke her heart badly years ago. What will it take to help the hero to start writing songs again?

As for the dialogue, it was intense due to the main characters back stories and this couple's past history where the hero really hurt the heroine by what he did. Why did he have to do the one thing that Naomi might never forgive him for? Moreover, the heroine is strong, brave and I liked her determination to keep things strictly professional when it comes to dealing with the hero, even though there's still so much chemistry between them that seems impossible to ignore. I also liked how the heroine deals with everything she faces, especially when it comes to facing off against the hero's manager. What is the woman's deal? Why does she have such a dislike towards the heroine?

While the hero, he has so much to make right in both his personal and professional lives. Will he be able to get his music career back on track? Will he be able to make things right with the heroine? However, in saying that, he's a fighter and I liked the battles he faces when it comes to his addiction because he's determined not to fall back on old habits, even though it's hard sometimes. I also liked how the heroine inspires the hero when it comes to the songs he writes. The words are splendid and show that the heroine is good for him. Yet, what I liked most of all about the hero was how protective he was of Naomi, even though his protective instincts could get him into trouble if he's not careful, which is proven by what he does for her.

Overall, Ms. Osburn has delivered another great read for this series where the chemistry between this couple was intense; the romance was delightful and had me loving this couple together; and the ending left me completely satisfied by the hero's determination to fight for his relationship with the heroine because they deserve a second chance. I would recommend Falling Star by Terri Osburn, if you enjoy second chance romances or books by authors Jamie Beck, Catherine Bybee, Jill Sanders and Kim Law.