REVIEW: WHAT ARE YOU AFRAID OF? by ALEXANDRA IVY 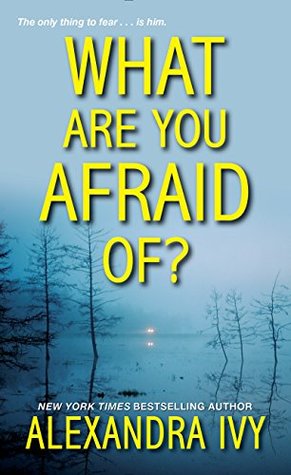 What Are You Afraid Of?
The Agency #2
By Alexandra Ivy
Releasing March 27th, 2018
Kensington Books

SHE’S LEARNED ALL ABOUT KILLERS
They aren’t the kind of women anyone misses. Truck-stop hookers, runaways . . . no one would even notice they’d disappeared if the killer didn’t photograph their lifeless bodies, posed in the back of a semi-trailer. Exactly like the infamous Trucker murders. But this isn’t just a copycat. It’s a vendetta.

NOW HE’LL TEACH HER
Carmen Jacobs interviewed the world’s most terrifying serial killers for her bestselling book, The Heart of a Predator. The police might not believe her, but she knows there’s a monster out there, paying homage to other murderers. The only person who can predict where he’ll strike next is Griffin Archer—a reclusive software millionaire with ample reason not to help her.

HOW TO DIE . . .
Carmen has charmed her way past Griffin’s defenses before. He didn’t intend to let it happen again. But with a psycho sending her trophies of his kills, he has no choice but to get involved. The clues point to a killer obsessed with Carmen—someone who knows her work, her past, her secrets. Someone who won’t be satisfied until he has made all her deepest fears come true . . .

In What Are You Afraid Of? (The Agency #2) by Alexandra Ivy, Carmen Jacobs book The Heart of a Predator is doing really well on the market, but she never expected a monster to come after her, even though she's interviewed several of the world's most terrifying serial killers for research purposes. However, when the police don't believe her, she turns to the one person that may be able to help -- Griffin Archer. But the deeper they get into the investigation, the more they begin to suspect that the killer is obsessed with Carmen. Will Griffin be able to keep Carmen safe, or will they lose their shot at happy ever after because a killer has his sights set on Carmen?

What a thrilling and captivating ride Ms. Ivy takes readers on in this second book of her Agency series where I was hooked from beginning to end because the heroine is an interesting woman that finds herself a target and the author kept me guessing as to who the mastermind behind the killings was. Why are they coming after the heroine? However, it was from the moment the hero and heroine come face-to-face for the first time where things really get interesting, as the hero does not seem pleased that the heroine is coming to him for help. Will Griffin help Carmen? Will the hero be able to keep her safe?

As for the dialogue, it was intense due to the main characters back stories because they have both suffered the lose of people they loved and I could understand why they've both put all their focus into their work. Moreover, the heroine is resilient, courageous, stubborn, and I liked how determined she was to get to the bottom of the photos she's received. I also liked how strong she is when it comes to the danger she faces. Will the hero be able to make sure nothing happens to Carmen. While the hero, he's strong, confident in his skills to help the heroine and I liked how protective Griffin was of Carmen, as the danger begins to close in on them. Also, I could understand why the hero was suspicious of the heroine the moment they first come face-to-face because of the past and how she once tricked him.

Overall, Ms. Ivy has delivered an entertaining and very engaging read in this book where the chemistry and romance between this couple was heady and nicely detailed to show how good these two are together; and the ending had me on the edge-of-my-seat because of the danger the hero and heroine face when they come up against the bad guys. However, I liked that everything worked out for the best between the hero and heroine, especially because he's still protecting her long after their face-off with the bad guys. Will he be able to get her back something she should have ended up with years ago? I would recommend What Are You Afraid Of? by Alexandra Ivy, if you enjoy romantic suspense, the opposites attract trope, or books by authors Laura Griffin, Katie Reus, Kat Martin and Kaylea Cross.