BLOG TOUR - REVIEW: WANTED FOR LIFE by ALLISON B. HANSON 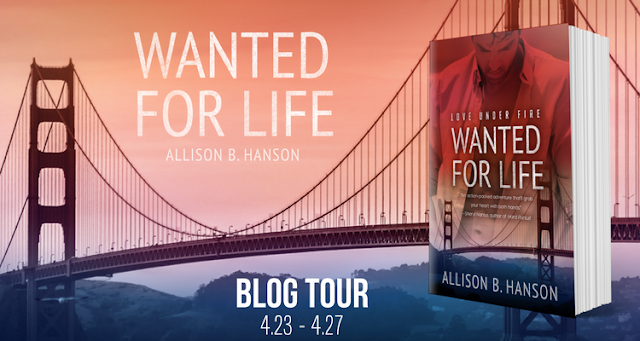 Deputy Marshal Angel Larson has been set up and accused of murder. On the run, desperate to stay one step ahead of the law and the real killer, she turns to a former protectee in a small town—the man who's haunted her dreams...and fantasies...ever since.

Former DEA agent Colton Williamson misses the action of his past life since entering witness protection as a high school math teacher. He also misses Angel, who refused to join him in his new life. Now it’s Angel who’s in trouble, and Colton can’t help but be there for her—before it's too late.


But the killer may be closer to them than they think.

In Wanted for Life (Love Under Fire #2) by Allison B. Hanson, Deputy Marshal Angel Larson is in big trouble. Knowing she'll be accused of murder if she's found at the scene of the crime, she decides to go on the run. The only safe place she can think of is with Former DEA agent Colton Williamson, a man that entered the witness protection program in order to testify against a really evil man. Will Colton be able to convince Angel that they're meant to be together this time around or will they lose their shot at happy ever after?

What an absolutely entertaining, fast-paced, thrilling ride Ms. Hanson takes readers on this second book of her Love Under Fire series, which opened brilliantly with what's happened and the heroine doing the only thing she can. Will she be able to find a safe place where she can figure out who is setting her up? However, it was from the moment the hero and heroine come face-to-face for the first time that I absolutely loved because these two have history. Will Colton be willing to help her?

As for the dialogue, it was intense due to the main characters back stories and everything these two go through on their journey to happy ever after. Will the heroine discover who is setting her up? Moreover, both the main characters are fantastic, especially since these two shared so much in the past; the hero has gone from being an DEA agent to being someone that still helps people but not as law enforcement; and the heroine is in really big trouble that she may not be able to get out of.

With the heroine, she's resilient, courageous and I liked how determined she was to clear her name, even though there are moments when she could find herself in trouble. I also liked how she's managed to overcome the hard times in her life to be a Deputy Marshal. Certainly, she didn't have it easy with what happened to her and her parents at the hand of someone that should have loved her. While the hero, he's been through a lot and I liked how he's handled everything, even though it wasn't easy for him to walk away from his old life. Also, he's confident; good at helping people, which is proven by what he does for one of the secondary characters; and I liked how determined he was to help the heroine, even though convincing her to accept his help isn't going to be easy.

Overall, Ms. Hanson has delivered a wild and captivating read in this book where the chemistry between this couple was heady and convincing; the romance was special and had me glad these two have a second shot at happy ever after; and the ending had me worried for the main characters because of the final battle they face against the person that set up the heroine, but had me loving that they manage to come out on top. Then again, trusting people is something the heroine needs to get used to, especially when she has a few people that care about her and want things to be made right for her. However, it was the epilogue that wrapped this story up nicely because the hero and heroine are so happy together. I would recommend Wanted for Life by Allison B. Hanson, if you enjoy romantic suspense, the second chance romance trope or books by authors Cathy Skendrovich, Sheryl Nantus, Julie Castle and Tonya Burrows.

Angel hadn’t been sure what kind of reception to expect from Colton. Having a gun pulled on her had not been outside the realm of possibility. Still, seeing a Glock 19 pistol instantly appear in his hand made her pulse jump and her own hands reach for the sky.
She only hoped she’d be able to explain before he pulled the trigger.
“You broke my guard dog,” he said.
A cautious spurt of relief went through her. “I didn’t break him. He works fine. He just loves me. I think he knows I picked him when you said he was scrawny.”
When Colton had found out he was destined for WITSEC, he'd decided he wanted a companion. She’d suggested a puppy. Later, when he asked her to go into the program with him, she'd realized he wanted more in a companion than long walks and playing catch.
He’d wanted to spend the rest of his life with someone, and okay, she’d panicked.
“Not only did you eat my shoes, but you picked a girl over me?” He frowned at the dog, who didn’t look the slightest bit remorseful.
Colton’s Glock was still leveled on her, so she stayed still with her hands in the air. “I seem to remember telling you not to purchase a firearm.”
He looked down at the pistol and shrugged. "Old habits."
“Your new identification is good, but an overzealous background check could turn up inconsistencies,” she reminded him.
She’d guessed right away his new identity wouldn’t sit well with him. She’d even spoken to his handler about it. The man needed constant action. He would say it was because he didn’t like being bored, but that was BS.
She knew the real reason why he lived for danger.
“Are you going to let me in, or should I leave?” she asked, no longer alarmed by the gun. He might be really angry at her, but he wouldn’t shoot her. At least, she didn’t think so.
He’d probably been pissed after she’d left without a word in the middle of the night, but, surely, he was over that by now. No doubt, she was the only one still wondering what might have happened if she’d stayed...
“That depends," he said. "Are you going to kill me, too?”
He knew her better than that. They’d spent months together, and she’d let him in behind her walls, where no one else was permitted. Granted, she hadn’t told him about her past—she didn’t talk about that, ever—but she’d told him enough for him to know that she would have gladly put herself in front of that knife to stop someone from killing the person she was protecting.
There had been a time when she wasn’t sure she was cut out for that level of duty, but it had been tested, and she'd proven she would always do the right thing when it came right down to it.
"Seriously?" She made a sound of annoyance and rolled her eyes.
She’d pinned everything on his willingness to help her. Her Plan B was to look for an abandoned property and hide out until things died down. But with the level of media coverage the story was getting, that could take months. Or longer.
Besides, abandoned properties usually contained things like rats and spiders. No thanks. She’d go up against a bad guy any day, but a spider? Hell, no.
She needed Colton. In more ways than one. But she was determined to keep things professional this time.
She let out a breath when he lowered the Glock.
“Get in here,” he muttered.
Whether he meant her or the dog she wasn’t sure, but both of them hightailed it into the house.

One very early morning, Allison B. Hanson woke up with a conversation going on in her head.  It wasn’t so much a dream as being forced awake by her imagination. Unable to go back to sleep, she gave in, went to the computer, and began writing.  Years later it still hasn’t stopped.