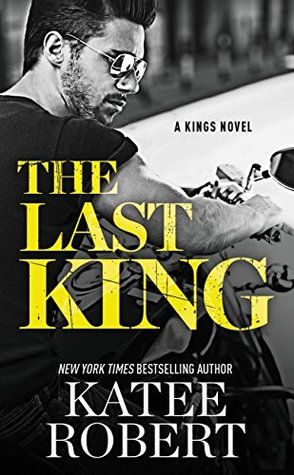 THE MAN SHE HATES TO LOVE
Beckett King just inherited his father's fortune, his company-and all his enemies. If he's going to stay on top, he needs someone he can trust beside him. And though they've been rivals for years, there's no one he trusts more than Samara Mallick.

The rebel. That's how Samara has always thought of Beckett. And he's absolutely living up to his unpredictable ways when he strides into her office and asks for help. She can't help wondering if it's a legit request or just a ploy to get her into bed. Not that she'd mind either one. After all, she likes to live on the edge too.
But soon the threats to the King empire are mounting, and the two find family secrets darker than they ever imagined and dangerous enough to get them both killed.

In The Last King (The Kings #1) by Katee Robert, Beckett King should be able to trust his family, but for years there's been a family feud. So, when his father dies and Beckett inherits the family company, he knows he's going to have to watch his back. However, there may be someone he can trust, even though they've been rivals for years, and that's Samara Mallick. Will Samara be willing to help him or will they lose their chance at happy ever after because the King family secrets put them in more danger than they could have ever possibly imagined?

Ms. Robert never fails to impress me with her writing and this first book of her Kings series is absolutely brilliant and completely hot right from the prologue, as Beckett is full of charm and Samara is hopeless in resisting him. However, in saying that, she knows better than to trust him because their rivals. Will she begin to realize that her loyalty lies with a woman that will do anything to get what she wants, even if it means breaking the law?

As for the dialogue, it was intense due to the main characters back stories, especially that of the hero because of the family feud that puts him at odds with the rest of the King family. Luckily though, he has one person on his side, especially when Samara begins to realize how ruthless her boss is and how far the woman is willing to go to get what she wants. Will Samara go along with the woman's plans when it comes to the contract she wants the heroine to secure? Furthermore, both the main characters are compelling and I loved the interactions between them, as she doesn't want to end up like her mother in falling for a rich man and then things don't work out. Will things work out for Beckett and Samara?

With the main characters, I absolutely loved Beckett. He's confident, faces quite the challenge in winning over the heroine, and I liked that he didn't back down when things became more and more dangerous for him. I also liked how protective Beckett was of the heroine, as she may become a target someone can use against him because she's come important to him. While the heroine, she's strong, independent, smart and I liked that she gave the hero a chance, despite her fears of abandonment. I also liked that the heroine was just as protective of Beckett as he was of her, especially when she realizes how much she has to lose.

Overall, Ms. Robert has delivered a wonderful read in this book, which encompasses the perfect combination of steamy romance and intense suspense that had me on the edge-of-my-seat with every bit of danger this couple face, even though Beckett seems to be the target. Yet, what I liked most of all about the ending of this story is the way things worked out for the best for Beckett and Samara and that they were willing to fight for their future. I would recommend The Last King by Katee Robert, if you enjoy the enemy to lovers trope or books by authors Avery Flynn, Nina Croft, Kristen Proby and Tessa Bailey.

Heaven was Samara in a little green dress.

Beckett watched her walk across the lobby, her mile-long legs eating up the distance with ease. That glimpse of wildness she’d given him last night was in full effect today, her hair a mass of black waves that seemed to curl and snap around her shoulders with each step. Her dress fitted her like a second skin, sloping down over her breasts, her stomach, to her hips and thighs.

But it was her dark eyes that drew and held him. Anger and desire and something like guilt lingered there, and she held his gaze as she stopped in front of him. “Do I meet your expectation?”

She arched a single eyebrow. “I know.”

That surprised a laugh out of him. Beckett turned to the elevator bank and offered his elbow. The gentlemanly move was over-the-top for their current circumstances, but he couldn’t be this close to her without touching her. Kissing her now, here, was a terrible damn idea, so he’d settle for the small touch. “No false modesty. I like that.”

“I think we’ve established that I don’t operate based on what you like.” Despite her words, amusement pulled at the edges of her lips, and she set her hand carefully on his forearm. “Every time I think I have your number down, you surprise me. Most guys get pissy pants if a woman doesn’t fall at their feet when they call her beautiful.”

“I’m not most guys.” He waited for the elevator door to open and led her onto it. “You can’t fit me into a box and write me off, Samara.”

“I’m beginning to see that.” She shook her head, her hair brushing against his shoulder. “My life would be a whole lot easier if I could.”

He couldn’t argue that, so he didn’t bother. Beckett took them up to the executive level. He noted the way she studied everything, obviously filing away every bit of information she could lay her eyes on. “What does Lydia pay you these days?”

She dropped her arm and stepped back. “Oh no. I don’t think so.” She pointed at him. “We went over this last night. I’m not for sale.”

“It is most definitely not an innocent question.” She looked like she wanted to take off her shoe and throw it at his head. “I don’t care what issue you and your aunt have. I’m not part of it. You don’t get to use me as leverage. I’m not a pawn for either of you to sacrifice in this pissing match you have going on.”

Shame tried to take hold, but he wouldn’t let it. Samara knew the game, no matter how much it apparently offended her. “I’m the bad guy for trying to offer you a job, but I’m sure you agreed to show up here solely out of the goodness of your heart.” He pretended to think about it. “Wait, no you didn’t—which you already admitted. You’re here because Lydia wants to do whatever it takes to sink Morningstar. Full stop.” He motioned at the offices behind him. “Wake up, Samara. I’m only playing the game she made the rules for.”

She took in the empty COO office on the other side of the glass wall. “She poached your employees.”

“You’re not still harping on that paranoid talk about Lydia meeting Nathaniel.” Samara hesitated and then moved to stand in front of him. She pressed her lips together and then very gently said, “Do you think maybe it’s a good idea for you to talk to someone?”

Beckett jerked back. “What?”

There was nothing but sympathy in her dark eyes. “I’m serious, Beckett. I’ve known you a long time, at least by reputation, and this delusion you have going isn’t like you. Is it possible that Nathaniel’s death is hitting you harder than you realize? That you’re fixating on Lydia instead of your own grief because it’s easier to deal with an enemy than face the fact you can never make things right with your father?”

Every word flayed him, cutting to the quick. Beckett gritted his teeth against the need to tell Samara that she was the one who wasn’t thinking clearly. To yell. To expel some of the ugliness that had been brewing in him for a very, very long time. “I didn’t call you here to offer you a job, and I sure as hell don’t need a shrink.”

She stood her ground as he advanced. Her heels put them at the same height and she still managed to look down her nose at him. “Then why did you call me here?”

Because I can’t spend another moment alone without going out of my mind.

He didn’t say it. To admit how long it had been since he’d felt a connection with another person was to hand Samara—Lydia—a loaded gun and invite her to point it directly at him. He didn’t answer her verbally at all. Beckett cupped her waist and slowly pulled her against him, giving her plenty of time to register his intentions.

“Beckett.” Despair colored her tone and she gave a desperate laugh. “What are we doing?”

“I don’t know.” Using a hand on the small of her back, he pressed her firmly against him. “I don’t want to stop.”

Samara hesitated, but finally placed her hands gingerly against his chest. He waited, letting her decide. Yes or no. Push or pull. Stay or go. She hitched a breath. “I don’t want to stop, either.”