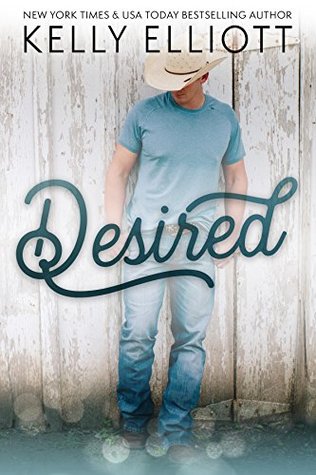 I thought all I wanted in my life was to succeed at football and one day take over my grandfather’s ranch. Nothing else mattered but those two things. Why suddenly did she appear every single night in my dreams? The faceless woman who had me waking up each morning soaked in sweat with my heart nearly pounding right out of my chest. Who was she? Where was she? And why was she the one thing I desired more than anything?

In Desired (Wanted #6) by Kelly Elliott, all Gunner has ever wanted to do is take over his grandfather's ranch once he graduates from college, but it seems something else is becoming more important to him and that is the faceless woman he keeps dreaming about every night. Not knowing who she is has been keeping him up at night, but when he discovers who his mystery woman is, will he fight for his chance with her?

With this book being a prequel for Ms. Elliott's Wanted series, it's a fantastic introduction into some of the incredible characters that are in the series and I've got to say I found the pages really flew by and I was hooked from the very beginning. Since this story is not only told from Gunner's point of view, but also his two friends -- Josh and Jefferson, as each man finds it becoming harder and harder not to want to settle down with one. However, it's not as easy as it seems for Josh who it's palpable has commitment issues or Jefferson who is in love with his sister's best friend but fights his feelings. Will Jefferson ever say the right thing to win the girl? Will Gunner ever meet his Ms. Right, especially when he's been dreaming about her, but doesn't actually know who she is?

As for the dialogue, it was compelling and I loved the friendship between Josh, Jefferson and Gunner, as they aren't afraid to offer each other advice or tell each other when they've messed up. Moreover, it was easy to like each of the men, as Josh is the cocky and confident one that can charm any woman; while Jefferson is the hot-tempered, protective one that loves to rile his sister's best friend; whereas Gunner is the level-headed one that isn't afraid to tell it like it is, especially when something annoys him like say a best friend that continues to do wrong by the girl he likes. Yet, it wasn't just the three men I liked. There was also the women that come into their lives or are already in their lives and make things interesting.

Overall, Ms. Elliott has penned a really good read in this book, which is a good place to start if you haven't read the Wanted series yet, even though it's book six of the series. As for the way this story ended, it will have readers wanting to dive into this author's Wanted series to see if Gunner, Jefferson and Josh do each get their happy ever after. I would recommend Desired by Kelly Elliott, if you enjoy books by authors Sandi Lynn, Kaylee Ryan, Stacy Borel and Katy Evans.