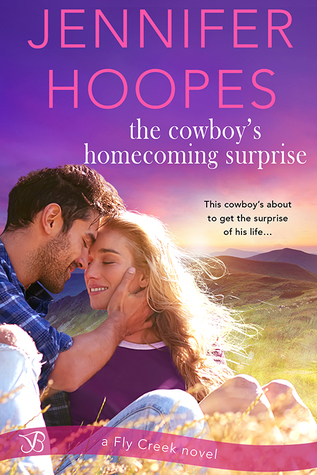 Single mom Peyton Brooks’s first Friday night out—with adults—in forever isn’t exactly going the way she’d expected. She can line dance at the local dive bar with the best of ‘em, but she can’t shake the feeling she’s completely out of her depth. Then the first man she ever loved walks in the door, bringing chaos, especially since the handsome cowboy’s the father of her daughter. This definitely calls for whiskey…Ryder Marks’s homecoming isn’t going how he’d planned. After years of working hard and finding success in Alaska, he’d thought returning to Fly Creek, Wyoming would feel different, more triumphant. Instead, he finds a daughter he knew nothing about, a father who still harbors anger and resentment toward him, and a former love he never forgot and who still warms his heart. Now he just has to convince Peyton he intends to stay and be the man she deserves, even if that means letting her go.

In The Cowboy's Homecoming Surprise (Fly Creek #2) by Jennifer Hoopes, it's been years since Ryder Marks laid eyes on Peyton Brooks, but she's still as beautiful as he remembers. However, when he learns of the secret she's been keeping for years, will Ryder be able to forgive Peyton or will the pair lose their second chance at happy ever after?

Having absolutely loved the first book of this series, I couldn't wait to read this story and I've got to say that this second book of Ms. Hoopes Fly Creek series was just as captivating as the first. Really, the main characters were fantastic and had me hooked from the very beginning, as Ryder hurt Peyton badly when he left. Will she be able to forgive him? However, it was from the moment the hero and heroine come face-to-face for the first time where things really take off because there's still plenty of chemistry between the pair. Will Ryder be able to make things right between them?

As for the dialogue, it was compelling and I loved every moment these two conversed, as the heroine tries to do her best to keep her secret hidden from the hero until she's ready to reveal it. Will she get her way or will the hero discover the truth? Furthermore, I loved the growing relationship between Ryder and his daughter, as Ryder seems more like a friend than her dad. I also like how hard the hero has worked to get to where he is in his life and that his father's words no longer have the power to hurt him like they once did. Since Ryder is successful and hard-working, which is proven by the business he's built from the ground up with a friend.

While the heroine, she's resilient, courageous and I liked that she was willing to give Ryder a chance to get to know his daughter, even though there are moments when she goes all 'Mama Bear' on him for being a friend to their little girl instead of being responsible when it comes to the little girl's safety. I also liked the tight bond she shared with her daughter and that she would do anything for her. Then again, she's lucky to have always had a great support system in Ryder's parents and her grandmother.

Overall, Ms. Hoopes has delivered another fantastic read for this series in this book where the chemistry between this couple was intense; the romance on the sweet side and had me loving this couple so much as they find their way back to each other; and the ending had me cheering for this couple's happy ever after because family issues are resolved and Ryder wants Peyton in his life and I loved how he went about asking her a very important question. However, it was the epilogue that wrapped this story up brilliantly because of the heroine's surprise. I would recommend The Cowboy's Homecoming Surprise by Jennifer Hoopes, if you enjoy second chance romances, sweet contemporary romances, or books by authors Elsie Davis, LE Rico, Sonya Weiss and JoAnn Sky.