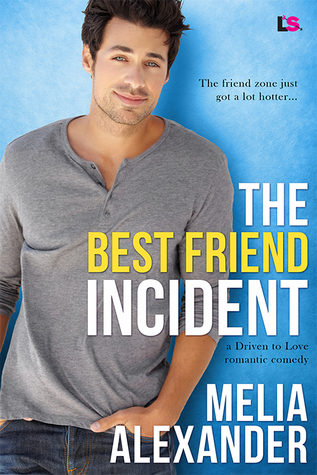 Stacey Winters is in love with love, but so far, she’s only found Mr. Dud, Mr. Cheater, and Mr. Boring. Even though her best friend Grant isn’t an option, at least being around him offers her a window into the male psyche—and sets the bar high for her future Mr. Right. But then she accidentally crosses the friend zone and kisses him, and it starts to feel a little too much like he might be what she’s been looking for...Grant Phillips doesn’t do relationships. A casualty of the foster care system, he knows people are just looking for a reason to bolt. "No attachments" is his hard and fast rule. There's only one exception: his best friend, Stacey. He refuses to jeopardize what they have.But now that he knows how good it felt to kiss her, felt the addictive slide of her body against his, Stacey Winters is indelibly stamped onto Grant's brain—and not just as his friend. He is so screwed.

In The Best Friend Incident (Driven to Love #2) by Melia Alexander, Grant Phillips and Stacey Winters have been best friends for years, but when Stacey accidentally crosses the friend zone, things begin to change for the better between them. However, Grant doesn't do relationships. Will Grant realize how important Stacey is to him before it's too late or will they lose their shot at happy ever after?

Ms. Alexander delivers a wonderful friends to lovers romance in this story, which had me laughing at the incident that could lead to things becoming awkward between them. Yet, instead, it leads to the best thing to happen to the pair when it comes to relationships since the heroine has a habit of picking men that end up being cheaters or deadbeats. Will Stacey finally land herself the man that's always been there for her and a man that will love her like she deserves to be loved?

As for the dialogue, it was entertaining due to these two being best friends and knowing each other so well. I also liked what they call their usual Tuesday get together. That had me laughing because both seem like they're grounded and have very good lives, considering all that they've been through with what the hero's mother did to him that's led to his abandonment issues and desire to stay away from anything to do with relationships and happy ever after. Moreover, the heroine is resilient, brave and I liked that she took a chance on Grant, even knowing that he doesn't do relationships. Yet, in saying that, she's always been there for him, so why would he ever think that would change? Since it's palpable that he's afraid that she'll leave him just like everyone else has.

While the hero, he's been through tough times as a kid who went through the foster system and I could understand why he'd be worried in entering a relationship and then having that person leave. I also liked the close relationship the hero shares with his brother because Grant seriously needs the sound advice Aiden gives him if he's going to finally conquer his demons and get the girl. Yet, what I liked most of all about the hero was how protective he was of the heroine and that he wasn't afraid to tell her things that might hurt her, which is proven by what he does for her at the start of this story.

Overall, Ms. Alexander has penned a really good read in this book where the chemistry between this couple was instantaneous from the moment of the incident and gets stronger as this story progresses; the romance was hot and had me liking that these two finally gave in to their feelings for each other; and the ending had me loving what Grant does to win back the heroine after their relationship goes awry. Definitely he gets an A for effort, especially with his smooth talking. Then again, can I just say -- gift cards. That made me laugh. However, it was the epilogue that wrapped this story up nicely because of the surprise the hero has for the heroine that showed he was ready for forever with her. I would recommend The Best Friend Incident by Melia Alexander, if you enjoy the friends to lovers trope or books by authors Kira Archer, Jenna Bayley-Burke, Erin Nicholas and Jaci Burton.