REVIEW: FALLING FOR HER SOLDIER by OPHELIA LONDON 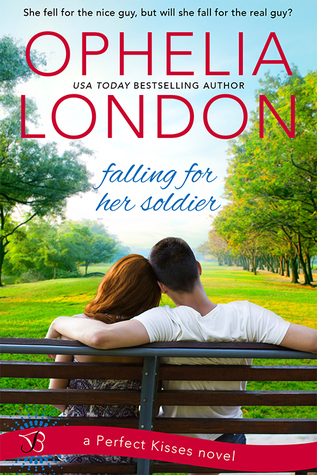 She fell for the nice guy, but will she fall for the real guy?Ex-ballerina Ellie Bell has twenty-four days left until her self-imposed man-less year is up. No more falling for the wrong kind of guy—charming, sexy, bad. Why can’t she find someone sweet like Charlie Johansson, her soldier pen pal? His e-mails meant the world to her, and she can’t stop thinking about him…until she meets Hunter, whose muscles and cocky smile threaten to have her relapsing.Before Charlie “Big Game Hunter” Johansson’s last tour of duty, he’d gone through women like crazy. But after connecting on a real, emotional level via letters with his best friend’s sister, Charlie’s ready for a relationship—with Ellie Bell. But then her brother introduces him as Hunter. Proving he’s no longer a player by becoming Ellie’s dance partner for an Army benefit seems like it could convince both siblings he’s changed, but the harder he falls for Ellie, the harder it is to come clean. Can he convince her to fall for the real him before it’s too late?

In Falling for her Soldier (Perfect Kisses #3) by Ophelia London, Ellie Bell decided she was going to go without men for a whole year and that time will be up soon. However, the moment she meets Charlie 'Big Game Hunter' Johansson she finds that control slipping. But with Charlie being introduced to her as Hunter, she has no idea that she already knows quite a bit about him. When Ellie learns the truth while she and Charlie do everything they can to help keep open the Warrior Station, will she be able to forgive Charlie for keeping something so important from her, or will she walk away from her chance at happy ever after?

Ms. London pens such wonderfully sweet romances and this third book of her Perfect Kisses series was such a delightful story, as the hero is a bit of a player that has finally found the one woman for him; the heroine is determined to ignore the chemistry between them because she's interested in someone she's never met (in all honesty, all I could think was good luck to her); and the dialogue was a wonderful combination of intense moments and playful banter that had me loving this couple together. However, it was from the moment the hero and heroine come face-to-face for the first time where things get very interesting because Charlie is fascinated by his friend's sister, but Ellie has no idea who he really is.

Both the main characters were wonderful and I enjoyed every moment they conversed, especially since the heroine is on a hiatus from getting involved with a man. Will she be able to abstain for the time she's allocated to take time for herself? Moreover, the heroine is resilient, brave, kind, caring and I loved how determined she was to stick to her year-long hiatus of no dating. I also liked her determination to help keep Warrior Station -- a charity-run place for Veterans to have a place to go when they get out of the military -- open. Her idea to raise money was brilliant, especially since it allows her to spend time with the hero and use her skills as a dancer. While the hero, he's fun; a good guy because he's willing to help the heroine with her plan for raising money; and I liked how determined he was to win the heroine over, even though he knows their growing relationship could blow up in his face, if the heroine discovers the truth about who he really is.

Overall, Ms. London has delivered a splendid read in this book where the chemistry between this couple was delightful and the ending had me feeling sorry for the heroine for being blindsided when it came to the hero's true identity and not how he was introduced to her as, but had me loving how determined the hero was to make things right between them because he wants a future with the heroine. I would recommend Falling for her Soldier by Ophelia London, if you enjoy the brother's friend trope, the opposites attract trope, or books by authors Sonya Weiss, Donna Kauffman, Kate Clayborn and Melody Grace.