REVIEW: UNDERCOVER WITH THE NANNY by CATHY SKENDROVICH 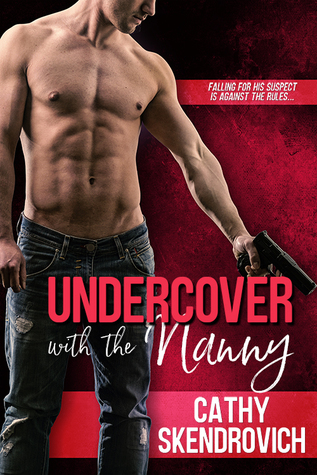 DEA agent Sawyer Hayes came to California in search of a drug cartel leader who slipped through his fingers in El Paso. The link to finding him is Kate Munroe, a nanny for one of his henchmen. The problem? He didn’t expect to be so drawn to a possible suspect. How is he supposed to do his job when his growing feelings for her are clouding his judgment?Interior designer Kate Munroe’s life is a train wreck. Her parents’ deaths left her with their mounds of debt, she can’t get a job designing even a cubicle, and she’s bunking in her best friend’s spare bedroom. To make ends meet, she’s a nanny to a lonely little boy whose rich father works all the time. Romance is not on her radar. But her hot new neighbor could change her mind, with his broad shoulders and Southern charm. Too bad his secrets could destroy her.

In Undercover with the Nanny by Cathy Skendrovich, DEA agent Sawyer Hayes is determined to take down the drug leader that got away from him and his team in El Paso. However, his only lead is Kate Monroe, the nanny of one of the leader's henchmen. But the more time he spends with Kate, the more Sawyer finds himself doing the one thing he shouldn't -- getting involved with a potential suspect. Will Sawyer be able to prove her innocence, so they have a shot at happy ever after or will Kate's trust issues send her running from the man she's falling for?

Ms. Skendrovich pens an utterly captivating read in this book, which I loved right from the beginning because it brought a smile to my face due to how the hero and heroine meet. Could the hero have been a little more sophisticated and co-ordinated in his approach or is what he does the perfect way to introduce himself? In all honesty, what he does is sure to get the heroine's attention whether it's good or bad attention, depending on how she reacts.

As for the dialogue, it was intense due to the main characters back stories, as the heroine doesn't trust easily and the hero is determined to find and take down the drug leader that hurt someone he cares about. Will the heroine be able to help the hero? Will the hero finally arrest the drug leader he's after? However, in saying that the dialogue was intense in this book, there are also moments where I smiled and cried a little, especially towards the end. Moreover, the heroine is strong, brave and I liked that she took a chance on the her. I also liked how good she was to the kid she took care of since she knows what it's like to have no one that's there for her. Not that the heroine's situation was the same as the boy's, but it isn't easy for her to watch the boy wanting his father's approval time and again and being left disappointed. Will she speak up to the kid's father?

While the hero, he's confident, hard-working, doesn't back down when the going gets tough including when he butts heads with another agent, and I liked how persistent he was when it came to getting close with the heroine. Will she be the lead he needs to take down the drug leader he's after? Will the hero realize how important the heroine has come to mean to him before it's too late? I also liked how far the hero was willing to go to protect the heroine, especially once he and his team realize how costly the operation they're running could be by not knowing all the facts.

Overall, Ms. Skendrovich has penned a fantastic read in this book where the chemistry between this couple was strong and undeniable; the romance was splendid and had me loving these two together; and the ending had me worried for the main characters because of the daring rescue that definitely had me wanting to bite my nails, yet I liked how everything worked out for the best and that the heroine gave the hero another chance after their relationship went awry because of his secrets. However, it was the epilogue that wrapped this story up nicely because Kate and Sawyer are so good together and deserve every bit of happiness they've found. I would recommend Undercover with the Nanny by Cathy Skendrovich, if you enjoy romantic suspense, the sexy protector trope or books by authors Taylor Lunsford, Tonya Burrows, Allison B. Hanson and Tee O'Fallon.