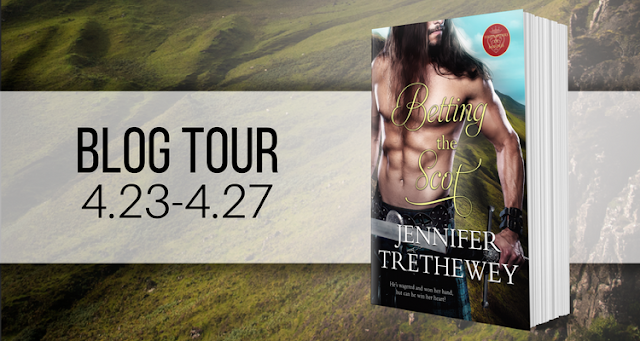 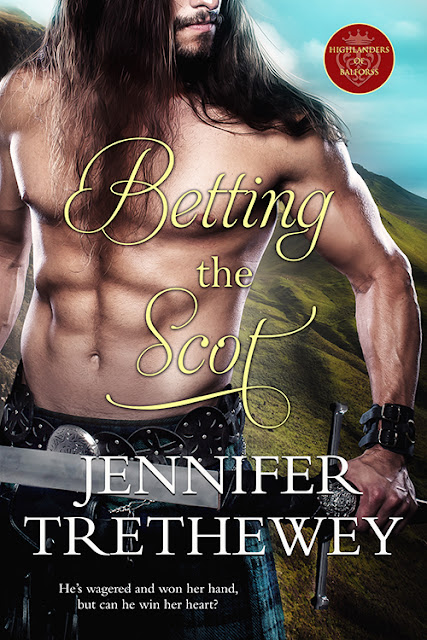 Declan Sinclair is a Highlander who believes his dreams never lie. When he spots Caya at a public house, he knows instantly she is the woman in his dreams—his future wife. Though her brother had promised never to gamble again, he engages Declan in a card game—and the prize is the lovely Caya. Caya Pendarvis has no time for childish things like dreams or fairy-tales or love. She’s the sacrificial lamb on her way to the far north of Scotland to wed a wealthy merchant in exchange for settling her brother’s gambling debts.Winning at cards is one of the many things Declan Sinclair does well. Unfortunately, the ability to court a woman—a talent he lacks—is the only skill he desperately needs to win Caya’s heart.

In Betting the Scot (The Highlanders of Balforss #2) by Jennifer Trethewey, Declan Sinclair recognizes the woman from his dreams the moment he sees her. However, finding a way to convince her to give him a chance seems impossible until her brother offers her as the prize in a card game. Will Declan be able to win Caya Pendarvis over or will she walk away from the one man she could be truly happy with?

What a fantastic and captivating read Ms. Trethewey has delivered in this second book of her Highlanders of Balforss series where the main characters and dialogue entertained me from start to finish and had me reading quickly, determined to discover how things would turn out for Declan and Caya. Since from the moment they meet, it's palpable that Caya believing Declan is her best hope is going to lead to trouble. Will her brother ever stop betraying her?

As for the dialogue, it was intense due to the main characters back stories, especially that of the heroine, because she's been treated by her brother like she's a prize that her sibling can continue to gamble away to the highest bidder. Will her brother ever do right by her? Moreover, the main characters were wonderful and I enjoyed the obstacles they had to overcome to be together. Will the heroine realize that Declan is the one she wants before it's too late? Will Declan be able to prove to Caya that everything that happens isn't her fault and that he wants to marry her no matter what?

With the main characters, the heroine is strong and brave in giving Declan a chance, considering the fact that if she can't trust her own brother, how is she supposed to trust anyone else? I also liked how kind and caring she is and that she would do anything to help someone, which is proven by what she does that has people thinking she's evil. Yet, what I liked most of all about the heroine is how well she fit in with Declan's family and that they were willing to do anything to make her time with them as pleasant as possible. While the hero, he's confident, hard-working and I liked how determined he was to win the heroine over, even though that isn't easy. I also liked the close bond the hero shared with his family, especially his cousins because they were willing to help him any way they could. Then again, they like to tease each other too.

Overall, Ms. Trethewey has penned an absolutely delightful read in this book where the chemistry between this couple was strong; the romance was wonderful and showed how good Declan and Caya are together; and the ending had me worried for the main characters, but had me loving that the secondary characters had Declan's back when it came to what they needed to do to make certain the heroine was safe. Yet, what I liked most of all about the ending is how what happens brings this couple even closer. No way will Caya and Declan let anyone hold them back from being together any longer. I would recommend Betting the Scot by Jennifer Trethewey, if you enjoy Historical Romances or books by authors Heather McCollum, Julia London, Vanessa Kelly and Michelle McLean.

His mouth hung open. Did he not believe her? Did he not understand her? Or had he changed his mind? “You do still want me to be your wife, don’t you?”

An odd look appeared on Declan’s face. One she couldn’t interpret. “Well now,” he said. “That all depends.”

“Depends on what?” Oh, God. Was he changing his mind? Did he wake up and realize she was a fool for trying to save her brother?

“I ken you love me, but I need a wife who will trust me,” he said and took a step closer. “I ken it’s a hard thing for you to trust given all the lies your brother had told you. And me, I was wrong to take you from him the way I did. I gave more thought to my daft dreams than I did for your happiness and I’m sorry for that, but…”

“But what?” Hot tears pricked at the corners of her eyes.

“When I thought you were lost to me, when I thought I’d never see you again, I knew that I loved you more than my own life. I was ready to toss my life away to save you. That’s how much I want you, need you, love you.” He held out his hand just like that fateful morning in front of the Crown Tavern. “So, I’m asking you, do you trust me?”

Jennifer Trethewey is an actor-turned-writer who has moved her performances from the stage to the page. In 2013 she traveled to Scotland for the first time, where she instantly fell for the language, humor, intense sense of pride, and breathtaking landscape. Her love for Scotland was translated into her first series of historical romance novels, the Highlanders of Balforss. The sexy, adventurous first book of the series, Tying the Scot, released in November 2017.

Trethewey’s primary experience in bringing the imaginary to life was working for one of the oldest women’s theaters in the nation, where she was the co-founder and co-artistic director. Today she continues to act, but writes contemporary and historical fiction full-time. Her other loves include dogs, movies, music and good wine. She lives in Milwaukee with her husband.