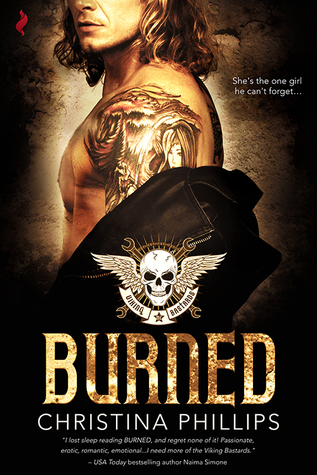 Ty...
Ten years ago I offered her everything, and she threw it back in my face. When she walked, I vowed no other woman would ever screw with my head the way she did. I moved on. Now I'm the V.P. of the Bastards, run my own nightclub, and nameless sex keeps me sane. No commitment or ties, just the way I like it. Now she's back, for one week only, gorgeous, successful, and I can't keep away. She offers a long goodbye, a way to heal our fractured past. She burned me so bad––there's no way I should even want to be near her. But the more she gives, the more I need. Until I discover the real reason she left, and my whole damn world implodes...

In Burned (Viking Bastards #3) by Christina Phillips, Ty can't believe that the woman he once loved is back in his life, even though Jas is only in town for a week. Determined to finally be able to move on, she gives Ty a week of memories and the chance to heal. But when the week is over, will they go their separate ways or will Ty be able to convince Jas to give him a second chance, especially when he discovers the truth of why she left years ago?

This is the first book I've read of this series and I've got to say that I really enjoyed from the start, as it isn't easy for Jas to be back. However, the moment the hero and heroine come face-to-face for the first time is what drew me into this story completely, as there's still plenty of chemistry between Jas. Yet, the heroine has a dark secret she'll do anything to protect. Will she be able to keep the truth from Ty? What happens if the truth comes out? Will Ty be able to handle it?

As for the dialogue, it was intense due to the main characters back stories, as the heroine has been through so much because of what the hero's family put her through. However, in saying that, she's risen above what happened to her to be the strong, independent woman she is. She's also quite talented and has come so far in making something of herself when it comes to her career. Yet, what I liked most of all about the heroine is that she gave the hero a chance because they need each other to heal from their fractured past. While the hero, he's confident and really made something of himself because of all he's accomplished, but what I liked most of all about Ty is that he proved to the heroine that she'll always come first in his life.

Overall, Ms. Phillips has delivered a really good read in this book where the chemistry between this couple was intense; the romance steamy; and the ending had me sympathizing with the heroine because of what she's been through in the past, but had me loving that the hero was willing to fight to their second chance together. No longer was he willing to let his family come between them, especially not after the shocking secret he discovers and then with the surprise the heroine has for him. I would recommend Burned by Christina Phillips, if you enjoy the second chance romance trope or books by authors Laura Kaye, Anne Marsh, Lila Rose and Jeanne St James.

He gives a predatory smile that doesn’t reach his eyes and backs me up against the wall. “You think one fuck’s gonna make everything right?”

My heart pounds, it’s hard to breathe, and I’ve haven’t felt so alive for more than ten long years. “That’s all you’re going to get, so make the most of it.”

Reckless. I don’t care, and it doesn’t matter. I can say anything to Ty, do anything, the way I haven’t been able to with anyone else since before I left L.A.

“Is that right.” His hands are flat on the wall beside my shoulders, imprisoning me between his arms. I glance at his inked biceps. God, how I used to love his tattoos. Now his left arm is sleeved, an intricate work of art that I could spend hours admiring…

Stop. This isn’t about recreating our past or building bridges. This is everything it never was before. Lust and sex, pure and simple, with no devastating emotions to rip my heart to shreds again.

I drag my attention back to his face. Not that it’s a hardship. If anything, the faint lines around his eyes and the groves in his cheeks just make him more gorgeous than before.

Somehow, I manage to find my voice. “Yes. Take it or leave it.”

Did I just say that?

“That’s what you do now, is it?” He doesn’t come any closer, but the heat from his body envelopes me, stealing my breath and what’s left of my sense. “Fuck them and leave them?”

What would he say if he knew the truth? That even now, after all this time, he’s the only one who meant anything?

“Why? Do you want more than a quick hookup with me?”

His brief grin is anything but amused. “One night should more than do it. What about you?”

I always wanted the impossible when it came to Ty, but I gave up on those dreams a long time ago. If this is the good-bye we never managed before, I’ll make it count. Maybe then I’ll be able to let go and move on.

“A whole night? I was thinking more of a quickie up against the wall.”

“When did your mouth get so smart?”

“You didn’t answer the question.”

This time his smile turns my legs to jelly, and I flatten my palms against the wall behind me before I do something stupid like wrap my arms around him and never let him go.

How is that stupider than offering him a quickie? Except I already know the answer. Mindless sex is one thing, but if I let him through the barriers I’ve built around my heart over the years, leaving him again will all but destroy me.

“I’ll take you up against the wall first, if that’s your best offer. But I haven’t come here for one quick screw. I’m going to have you every fucking way I want tonight, Jas. One night, that’s it, and then we’ll never see each other again. You understand?”

Christina Phillips is an ex-pat Brit, who now lives in Western Australia with her high school sweetheart and their family. She’s had more than twenty romances published, from novellas to single titles, in contemporary, ancient historical and paranormal. Whatever the subgenre, she writes on the sizzling side of naughty, and loves bringing her heroes to their knees (her heroines enjoy this, too 😊 )


She loves good coffee, expensive chocolate and bad boy heroes, although not necessarily in that order. She’s also owned by three gorgeous cats who are convinced the universe revolves around their needs. As in all things, they are not wrong. Sign up for her newsletter at http://christinaphillips.com