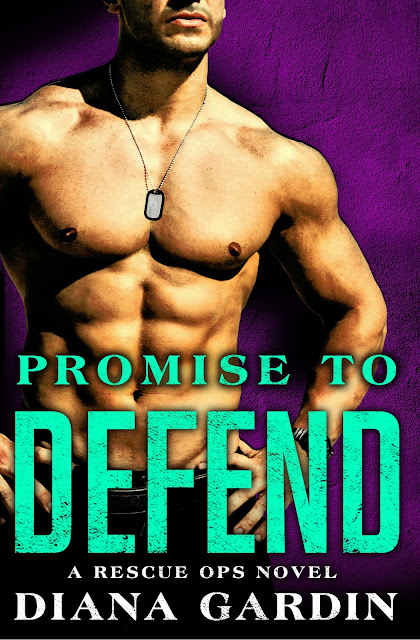 In Promise to Defend (Rescue Ops #2) by Diana Gardin, seven years ago was a tough time for Ronin Shaw when he lost the love of his life and they never found her murderer. Yet now, he's found another woman to help him move on from his painful past, Olive Alexander. Except she's facing trouble from her own past, and unless Ronin can keep her safe, he might just lose her. However, when Ronin discovers his past collides with Olive's trouble, will he be able to keep her safe or will their happy ever after never happen?

What a wonderfully-written, fast-paced, spellbinding read Ms. Gardin has penned in this story, which encompasses a marvellous blend of romance and suspense, two fantastic main characters with harrowing back stories that had me wanting to discover more about them and whether the hero would ever learn the truth of who killed his wife; and riveting dialogue that made this story an absolute page turner, because of the danger these two face that kept me on the edge-of-my-seat. Why does the heroine's ex want her back?

The way this story started had me totally hooked, as the heroine is determined to avoid getting close to the hero, especially when all she wants is to feel safe and to her, the hero is anything but safe because he makes her feel things she's never felt with another man. Will the hero win her over? Will he be able to keep her safe when he discovers what's going on with her and how her life may be in danger?  Moreover, the heroine is resilient, courageous, hard-working, determined to prove she can take care of herself because of what happened to her in her past, and I liked how she let the hero in since she knows there's no way she can go up against her ex and his family without having someone on her side that's capable of helping her. I also liked that the heroine was just as protective of the hero as he was of her.

While the hero, he's confident, determined to do whatever it takes to protect the heroine, and I liked how fearless Ronin was when it comes to facing the danger that they face that had me thinking they may not be able to get out of it without one or both of them ending up hurt. I also liked how determined he was to discover who killed his wife, and how tight he was with his teammates that were willing to help him with whatever he needed. Will they be able to keep Olive safe?

Overall, Ms. Gardin has penned an incredible read in this book that was every bit as good as the first book of this series; and where the chemistry and romance was special and what both the hero and heroine needed in their lives to be completely happy in life. The way this story ended had me concerned for one of the main characters, but I really enjoyed how everything worked out for the hero and heroine, as they deserve every bit of happiness that they've found together. However, it was the epilogue that wrapped this story up nicely, because of the surprise the hero had for the heroine. I would recommend Promise to Defend by Diana Gardin, if you enjoy romantic suspense or books by authors Zoe Dawson, Susan Stoker, Elle James and Tonya Burrows.

I'm broken. I have been for seven years. Ever since my wife was murdered while I was deployed overseas. I was protecting our country, but I should have been protecting her. I haven't looked at another woman since--but then Olive Alexander crossed my path. She stirs up feelings I thought were long dead. So when her house is ransacked after she receives a threatening message, I know I have to step in and keep her safe. I failed my wife, but I won't fail Olive. Unfortunately, Olive isn't exactly ready to accept my help...

With her sexy-as-sin pencil skirts and sleek ponytails, Olive clearly doesn't let anything--or anyone--mess up her perfectly ordered life. But years spent working as a special ops soldier has taught me how to read people... and I know Olive is hiding something. When my covert mission for Night Eagle Security collides with Olive's past, I'll have to get her to open up--or risk losing her. And losing Olive is not an option. If she's in danger, I'll defend her...even if it costs me my life.