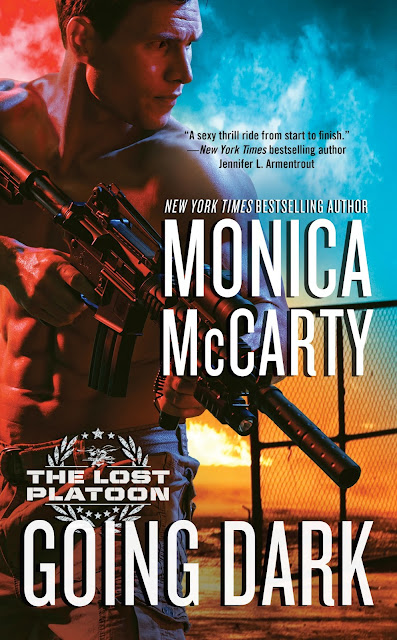 In Going Dark (The Lost Platoon #1) by Monica McCarty, during a covert op, SEAL Team Nine found themselves in trouble with several of the team dying. Unable to figure out whom they could trust, Dan Warren and the rest of the survivors vanished without a trace determined to discover who betrayed them. However, when Dan meets Annie Henderson and gets caught up in the woman's life and the danger closing in on her because of her boyfriend, will Dan be able to keep his cover and Annie safe, or will he lose the woman that has come to mean so much to him?

What a gripping and exciting read Ms. McCarty has penned in this first book of her Lost Platoon series, which encompasses the sexy protector trope; a military hero that is on the run and determined to discover who was responsible for his team walking into a trap during an op; and a heroine that gets herself mixed up in some seriously nasty business that she might not be able to get herself out of. The way this story started had me sympathizing with the hero and his team, because betrayal is always hard to deal with, especially when friends die during a mission. Will Dan be able to uncover the information he wants? However, it was from the moment the hero and heroine meet where this story became fast-paced, fully attention-grabbing, and had me determined to discover whether the heroine would be able to untangle herself from the danger she lands herself in.

As for the dialogue, it was intense due to the suspense, the main character back stories and everything the hero and heroine go through on their journey to happy ever after, especially since Dan needs to keep his identity a secret if he has any chance of staying alive. However, the dialogue wasn't all intense. There were some really good light-hearted moments between the hero and heroine, as they try to stay one step ahead of the trouble they find themselves in. Will Dan be able to make things right for Annie before he has no choice but to leave the heroine's side to keep himself and the heroine safe?

Furthermore, both the main characters were captivating due to their back stories and I loved how resilient and brave Annie was, especially since she has a lot to deal with when it comes to what she's in Scotland to do and what her boyfriend was planning. I also liked how smart the heroine was and how she challenged the hero when it came to figuring out why he was so secretive. Will she discover the hero's real identity? While the hero, he's confident, extremely good at hiding the truth of who he really is, and I liked how determined he was to protect Annie because she doesn't deserve what's happening to her just because she was too naïve to realize her boyfriend wasn't the good man she believed him to be. I also liked how far the hero was willing to go to protect Annie, even though using his skills as a SEAL could expose who he really is. Yet, what I liked most about the hero is that he was willing to break the rules enforced to he and his team, because he can't continue to live like he's been living -- off the grid, guarded and unable to get close to people for fear he could be betrayed again.

Overall, Ms. McCarty has delivered a wonderful romantic suspense in this book, which had the perfect blend of romance and suspense, where the chemistry between this couple was strong, and the ending had me concerned for the safety of the main characters. Will the hero and heroine be all right? However, in saying that, I liked how things turned out for Annie and Dan, as they realize that the only way to be completely happy is to be together, even if it means living day-to-day while Dan and his team continue to hunt down the information they want. I would recommend Going Dark by Monica McCarty, if you enjoy romantic suspense; stories containing military heroes or the sexy protector trope; or if you enjoy books by authors Laura Griffin, Toni Anderson, Misty Evans and Katie Reus.

Like Rome's Lost Legion, a SEAL platoon goes on a mission and vanishes without a trace.

After walking into a trap on a covert op in Russia, the men from top secret SEAL Team Nine are presumed dead. Not knowing whom they can trust, and with war hanging in the balance, the survivors must go dark and scatter around the globe.

Marine ecologist Annie Henderson joins her new boyfriend on a trip to the Western Isles of Scotland to protest a hazardous offshore drilling venture. When she realizes that she may be swept up in something far more dangerous than she'd intended, there is only one man she can turn to. . . .

She and the mysterious but sexy dive boat captain haven't exactly gotten off to the best start, but something about his quiet confidence makes her think that he's the kind of man she can depend on. Because he's gruff and guarded, she can tell Dan Warren has secrets. But she could never imagine how high the stakes are for him to keep his cover, even as he risks everything to protect her.
. . .

Dean was about to turn up his street when a woman darted past him. She was so preoccupied with whatever was bothering her that she didn’t notice him.
But he noticed her. The sexy brunette had been the focus of too many of his sex-starved thoughts for him not to have recognized that shadowed figure right away.
His thoughts immediately turned to anger. What the hell was she doing out here alone at this time of night?
Granted Stornoway wasn’t exactly the mean streets of name-your-favorite American inner city, but it had its share of illegal activity—especially along the waterfront—and it wasn’t a place where a young woman should be walking alone in the middle of the night
He went after her without thinking. Proving his point, she took way too long to realize he was behind her.
He could tell by the way she jumped when she turned around that he’d startled her.
But it didn’t last. As soon as she recognized him, her eyes narrowed angrily. “Why are you following me? You scared me!”
“Good. You shouldn’t be out here alone—” He stopped suddenly, seeing her expression. She looked about ready to burst into tears. “What’s wrong?”
Unconsciously he’d reached for her arm. Why the hell he’d done that he had no clue. He didn’t go around touching women without an invitation.
He released her before she could protest. But if she’d noticed the too-personal gesture, she didn’t let on.
“Nothing,” she replied, her expression too blank.
He held her gaze long enough for her to see that he knew she was lying. It must not be something she did often, because a guilty blush rose to her cheeks.
She was so damned cute. He wanted to . . .
Fuck.
He took a step back.
Go dark. Don’t do anything to risk your cover.
He heard the warnings loud and clear. But he couldn’t very well let her walk around alone. What if something happened?
“Where’s your boyfriend?”
The tightening around her mouth before she responded gave a big hint of what might be bothering her. Trouble in paradise? Now, that was a cryin’ shame.
“He’s still at camp. He’s hanging around for the music. Julien plays guitar.”
Dean didn’t care if he was Jimmy Hendrix returning from the dead for one last show. “And he let you walk back alone?”
She immediately stiffened, giving him a scathing look. “He didn’t let me do anything. I make my own decisions.”
From the way she said it, it was clear she thought he was some kind of medieval misogynistic pig.
One of those, was she? He should have guessed. That kind of oversensitive feminist crap drove him crazy—not everything was a “microagression.” Being a strong woman didn’t mean you could be stupid about personal safety. And all he’d meant was that douche bag should have cared enough about her safety enough to insist on accompanying her.
Although admittedly Julien probably wasn’t much of a defense.
“Then your decision was a shitty one.”
She looked stunned. “You just say whatever you think, don’t you? I wasn’t asking for your opinion.”
“Well, you got it.” He gave her a long look, taking in the Tulane sweatshirt, tight jeans that left no room to hide anything, and flip-flops. “And unless you are a black belt jujitsu specialist or trained in self-defense and carrying some kind of weapon, I’m walking you to the guest house.”
She looked up at him half outraged and half bemused, as if she couldn’t quite believe someone like him actually existed. It was a look he’d been on the receiving end of more than once.
Eventually her mouth twisted with a smile. “How do you know I’m not?”
“Because if you had any secret ninja skills, from the way you were looking at me a few minutes ago, I’d be on my ass right now.”