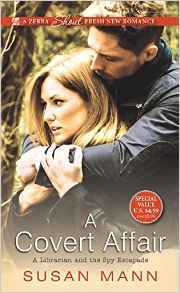 In A Covert Affair (Librarian and the Spy Escapade #2) by Susan Mann, Quinn Ellington is working her way to becoming a fully-fledged agent with the CIA. So far, she's learnt a lot of skills that come in handy for her latest assignment alongside her handsome boyfriend, James, when an Indian ambassador is kidnapped during a Library of Congress event. Will Quinn and James be able to save the ambassador or will their cover be exposed and put them at risk?

Having really enjoyed the first book of this series, I was really looking forward to reading this second book, and I've got to say that it's just as good as book one in the way that it offers plenty of action and intrigue, took me by surprise when it came to the person responsible for the kidnapping, and kept me captivated from start to finish due to the wonderful main and secondary characters, especially the heroine because of her obsession with everything to do with libraries Seriously, she's a total nerd that loves books and helping people find information they need. The way this story started had me hooked, as Quinn and James make such a great couple and I always enjoy the way they tease each other. However, it's from the moment the kidnapping happens where things gets very interesting and intriguing in this story. Will Quinn and James be able to locate the kidnapped ambassador? Will they be able to take down the person responsible for the kidnapping?

As for the dialogue, it was well-written, intense due to what the hero and heroine uncover in their investigation and full of intrigue and action due to the kidnapping and when Quinn and James go up against the bad guys. Moreover, the heroine is strong, brave and I liked how determined she was to prove she has what it takes to make a great CIA agent. I also liked that she wasn't afraid to do things on her own, even if James believes it may be too dangerous for her and is likely to worry. Yet, what I liked most about the heroine is how resourceful she is in uncovering information they need in their investigation. Will it lead her to the bad guys? While the hero, he's confident, protective and I love how he teases the heroine about being too much of a nerd and her occupation as a librarian. Luckily, Quinn takes the teasing as a compliment and not a criticism.

Overall, Ms. Mann has penned an exciting and thrilling read in this book where the chemistry between this couple is intense; the romance wonderfully passionate with James determined to show Quinn how much she means to him; and the ending had me on the edge-of-my-seat due to what this couple face. Will they win against the bad guys? However, it was right at the end of this book that I loved, as James realizes that their relationship can't continue like it is, especially since they work for the CIA. Meaning lots of undercover assignments to different places around the world, which would keep them apart. Will they commit to each other or go their separate ways? I would recommend A Covert Affair by Susan Mann, if you enjoy romantic suspense or books by authors Katie Reus, Liliana Hart, Janie Crouch and Kat Martin.

BLURB
A CIA librarian and her handsome spy boyfriend find themselves in the middle of an international incident when the Indian ambassador is kidnapped from a Library of Congress event.

Agent-in-training Quinn Ellington and James Bond Anderson travel to India, where the key to saving the ambassador is tangled up with a long-lost sacred library, a desecrated temple, and some very modern machinations. At least their cover as blissful newlyweds isn't too hard to pull off . . .